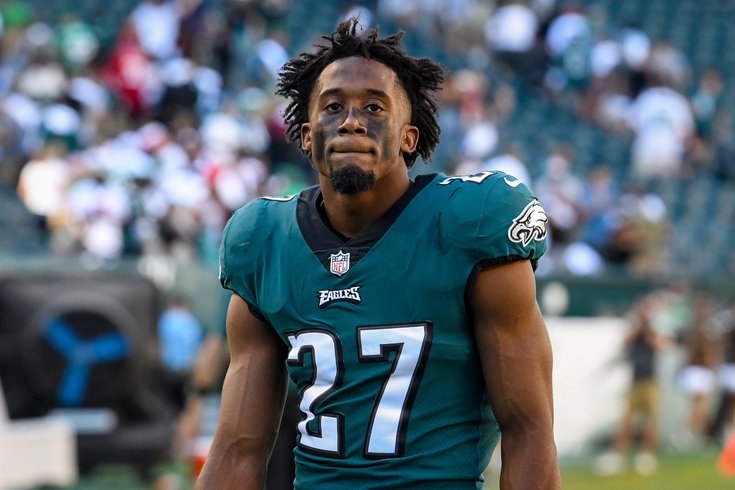 During the offseason, we'll be taking a close look at Philadelphia Eagles players of interest who are currently on the roster, and who could be shaping the future of the franchise. We'll kick off the series this year with a player of potentially sneaky importance to the Birds this season, CB Zech McPhearson.

Many have wondered why the Eagles haven't addressed the cornerback position in free agency so far.

"I think we have a lot of good young corners that showed us a lot in practice that maybe didn’t get the time to get out on the field last year to play that we’re excited about," Nick Sirianni said during the NFL owners meetings. "I don’t want to miss anyone, but you have Zech McPhearson, you have Tay Gowan, Mac McCain, Kary Vincent, all those guys that are young, first-year players. And we have a great secondary group of coaches. We have Dennard Wilson, D.K. McDonald, and then obviously Jonathan Gannon working with the secondary. I can’t wait to see how those guys continue to develop their game because they’re going to have great coaching.”

Well, the Eagles had a rare season in which they did not suffer many injuries at cornerback. With the exception of the Eagles' meaningless Week 18 game against Dallas, Darius Slay, Steven Nelson, and Avonte Maddox did not miss a single game. In past seasons, the Eagles' cornerback position had been decimated by injuries. In the divisional round playoff game against the Saints after the 2018 season, for example, the Birds played guys like Tre Sullivan, Cre'Von LeBlanc, and Josh Hawkins. It's never a good sign when you're in the divisional round of the playoffs, and you're asking yourself, "Wait, who's No. 48?"

As a result of the Eagles' health at corner, McPhearson did not get as much playing time in 2021 that he might have some other season. He was a core special teamer, playing 325 snaps on those units, including a role as a gunner on the punt coverage team, but he only played 179 snaps in the regular defense. Had the Eagles suffered an injury to Slay or Nelson, McPhearson likely would have started in their place. If the season started today, he would probably be the CB2.

In a small sample size, take this for what it's worth, but pro-football-reference.com had McPhearson down for 9 completions allowed on 17 targets, and a 69.7 QB rating allowed on the season. For this exercise, we watched McPhearson's snaps in the regular defense.

First, a quick rundown of each of McPhearson's games, and his preseason:

• Training camp / preseason: McPhearson had a very strong training camp, and even got four votes in our yearly "Eagles training camp stock up / stock down media poll." However, excitement for McPhearson's rookie season waned a bit after he had a rough preseason outing against the Patriots, though that game likely had little effect on his usage during the 2021 regular season.

• Falcons (2 snaps): I didn't bother finding McPhearson's two snaps in this game. Sorry, I have failed you all.

• Chargers (24 snaps): McPhearson didn't allow any completions after filling in for an injured Slay. He had sticky coverage when playing man (targeted once, incomplete), and showed good awareness in zone. No missed tackles.

• Broncos (11 snaps): Again, McPhearson filled in for an injured Slay, this time with a big lead. He was targeted three times, and gave up one completion for a small gain in which the clock kept running.

• Saints (26 snaps): For the third consecutive week, McPhearson filled in for an injured Slay. The Saints completed a couple of passes down the field in areas where McPhearson's zone overlapped with another defender's. But once again, he had sticky coverage when asked to play man. No missed tackles.

• Jets (33 snaps): McPhearson filled in for Steven Nelson in this game. Again, sticky coverage in man, though he did get called for holding (correct call) on one play. He was also very grabby in the preseason. More on that momentarily. He looked comfortable playing RPOs — played his man, while also keeping an eye on the backfield. 1 missed tackle in traffic, didn't lead to a notably larger gain.

• Giants (27 snaps): McPhearson and some of the younger defensive backs got a chance to play in the second half in a blowout against Jake Fromm and Mike Glennon. He nearly picked off Glennon in the end zone but couldn't hang on. That was his lone PBU of the season. He allowed a completion to Evan Engram on a drag route, and missed a couple of tackles in the flat while diving at ankles.

• Cowboys (56 snaps): This was the meaningless Week 18 game during which the Eagles played backups and practice squad guys against the Cowboys' starters. McPhearson was shaky in this game. He gave up a completion on a deep square in to CeeDee Lamb on a pass well behind him. He also had a chance to make a play deep down the field to Amari Cooper, but Dak Prescott was able to fit it in the turkey hole against the Eagles' Cover-2 look. On the next play he was beaten by Cooper for what could have been a TD, but Cooper somehow caught the ball out of bounds. In fairness, the Eagles' backups failed to produce any kind of pass rush, so the young defensive backs were exposed. McPhearson's run support was up and down in this game.

Here's a little taste of what he showed as a rookie:

• In man coverage, McPhearson may not be a track star, but he has enough short area quickness to provide sticky coverage. He also does a nice job of looking back for the football when in phase. There are moments where he can get grabby, and that has to get cleaned up. He's a candidate to lead the defense in penalties if he ends up starting. But on the whole, his man coverage skills were encouraging.

• In zone, McPhearson seems to see the field well, and has a good feel for the game. In the snaps I watched, he was rarely out of position, and he understands route concepts.

• Somehow, PFF had McPhearson down for an 80.9 rating against the run. Only nine cornerbacks had a better rating. I didn't see that at all. He's a good tackler when he wraps up, but he'll also dive at ankles, and he produced no big hits that I could see, at least in the regular defense. The potential for him to be a better tackler is there, but professional skill position players don't go down as easily as college guys.

As noted above, if the season began today, McPhearson would likely be the starting CB2 opposite Darius Slay, with Avonte Maddox in the slot. Of course, that could change if the Eagles select a cornerback high in the draft. The Eagles may not be able to turn a cornerback down if an exceptional value on one presents itself, but the bet here is that they aren't likely to reach for one, given the extreme overabundance of young cornerbacks they have acquired since last April.

In other words, I believe Sirianni when he says he wants to see what the young guys can do, and of the corners on the roster, McPhearson is the most likely to crack the starting lineup. He'll need a strong offseason to convince the team not to sign a one-year Band-Aid type during the summer, like they did a year ago with Nelson.