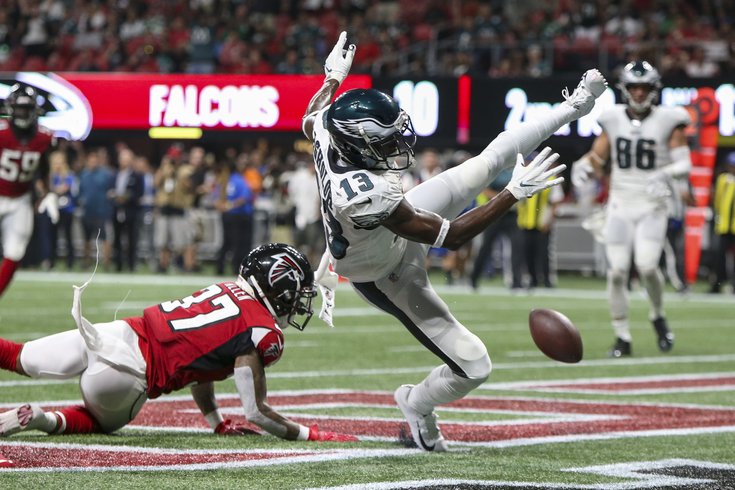 The Eagles took a small tumble in the power rankings this week.

Here's where people around the country have the Birds ranked after the second week of the 2019 regular season:

Pleasant surprise: RB Darren Sproles. The 36-year-old Sproles, who was supposed to retire after the 2017 season, is averaging a team-high 5.2 yards per carry and was the leading rusher for Philly in a Week 1 win over Washington. He is also serving as the team's punt returner. The 15-year vet has made fools out of doubters his whole career, but it seems unlikely that his role in the offense will remain this pronounced over the course of 16 games.

#JimmySays: As always, ESPN has a theme each week in their writeups. I'll respectfully disagree on premise that Sproles has been a pleasant surprise.

Nelson Agholor had the game in his hands ... he just couldn't hold onto it. Carson Wentz's perfectly placed dart down the far sideline with two minutes to play hit his receiver in stride, but Agholor dropped what would have been a sure touchdown. (For what it's worth, Agholor confirmed he lost it in the lights in the postgame, but still took accountability.) When Zach Ertz was stopped one foot short of a first down deep in Falcons territory, it was the final painful chapter in a frustrating loss to the Falcons. It's a shame, too, because this was one of the more enjoyable Wentz games ever. The quarterback struggled mightily in the first half and lost two of his top playmakers, Alshon Jeffery and DeSean Jackson, to injury, but he nearly brought the Eagles all the way back with a series of money throws in high-leverage spots. It was a reminder that, even in defeat, Philadelphia is in good hands. Now the Eagles have to get healthy after a punishing Sunday.

#JimmySays: Personally, I was very encouraged by the game Wentz had, for all the reasons noted above. He was indeed a stud in those "high-leverage" situations.

QB Carson Wentz showed flashes of his '17 (shoulda been MVP) season Sunday ... and flashes of why hellbent style might undermine him again.

The Eagles are not playing good complementary football. They're going away from the run, creating shorter possessions and keeping their shaky pass defense on the field longer to get exploited. The whole notion of just having Carson Wentz bail them out in the end isn't a long-term formula for consistent success, especially with their new receiver injuries.

Sunday night was a game that you had to watch to appreciate how well Carson Wentz played. Statistically it wasn’t his best, but his toughness was on full display. Still, the Eagles’ injury situation is getting troubling.

Doug Pederson needs to do some savvy roster juggling given the slew of injuries coming out of the Atlanta loss, with a Thursday-nighter coming after this Sunday.

#JimmySays: Wide receiver and tight end are really the two crucial positions to watch on the injury front this week. And as noted here, with a Thursday road game after Sunday's matchup, they really can't afford more carnage anywhere on the roster.