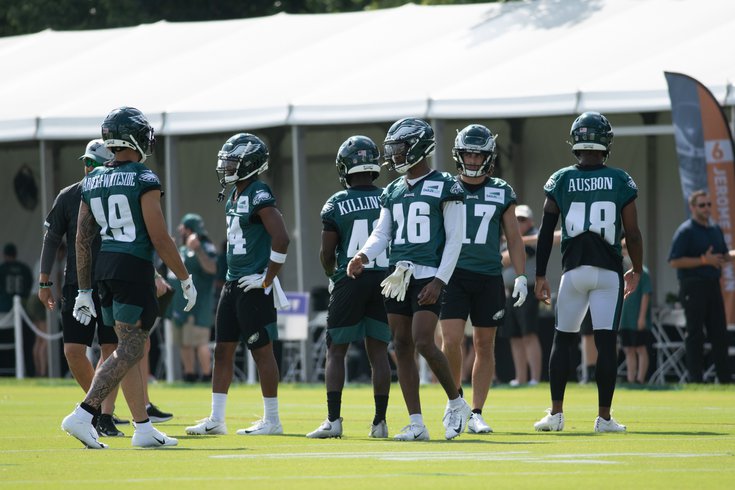 Day 10 of Philadelphia Eagles training camp — held at Lincoln Financial Field in front of the fans — is in the books, and the offense bounced back after a dreadful outing during their last practice. As always, we have notes.

• Quez Watkins had three highlight reel catches in front of the fans on Sunday night:

And then in 1-on-1's, he ran some nice routes and got good separation. Watkins' route-running looks significantly improved from last year to this year. He explained how.

"Being able to control my speed, being able to make 75 [percent speed] look like 100," Watkins said.

As a rookie, Watkins ran every route at full speed. This year he is doing a better job disguising his routes, and mixing his speeds so that when he turns on the jets, it's more difficult for corners to mirror and match him.

• The fans got a taste of what we've been seeing out of Tyree Jackson during these first two weeks of camp. He made several nice plays.

In the red zone, he got open over the middle, scored, and then had a thunderous dunk that shook the goal posts for a solid minute.

He also had a couple of grabs in which he got popped in the back as he was making the catch, but was able to hold on. In a hurry-up session late in practice, Jackson had three catches on three straight snaps. He has clearly been Joe Flacco's favorite target when the 2's are on the field.

Dallas Goedert and Richard Rodgers are going to be on the roster, and then we'll see about Zach Ertz (I still think he'll get traded). But of the remaining five tight ends on the roster, Jackson has clearly separated from the pack.

• Jalen Hurts, as usual, was up and down. On the positive side, he had a gorgeous teardrop pass down the sideline to Travis Fulgham, who tracked it over his shoulder, and was able to keep his feet in bounds. That may have been his best throw of this camp. He also displayed his athleticism at times, and made some strong throws on the run deep down the field.

On the negative side, he often took an eternity to throw, when it appeared that he had guys open (or at least "NFL open") early in the play. And then I think what fans will be frustrated by are the throws that are there to be made that he simply misses. He didn't have a ton of them on Sunday night, but one that stood out was a pass over the head of Goedert during a red zone session. A lot of quarterbacks in the NFL consistently complete that pass in their sleep, but that's not Hurts' game. He misses too many makeable throws.

• The offensive line has opened up some huge holes at times in the run game throughout camp. I firmly believe that the Eagles' best chance of maximizing their win total in 2021 is to mimic what Baltimore is doing with Lamar Jackson and their run-heavy attack.

While I don't think that building a run-heavy attack is the way to build a championship roster in today's NFL, it is the type of offense that best accentuates the skills of the players on this roster. It will be interesting to see if (a) Jeffrey Lurie gets out of the way and allows Nick Sirianni to run whatever offense he sees fit to run, and (b) if so, Sirianni comes to the same conclusion that a run-heavy attack gives the team the best chance of competing this season.

• On the OL downside, Andre Dillard got put on roller skates by Josh Sweat during 11-on-11's. I should note that Dillard did have an otherwise good practice. Nate Herbig had a bad snap that got past Flacco. Herbig has begun cross-training at center, and some bad snaps are probably to be expected initially.

• After missing two out of six field goal attempts on his first set of kicks of training camp, Jake Elliott was a perfect 6/6 on each of his next two sessions. 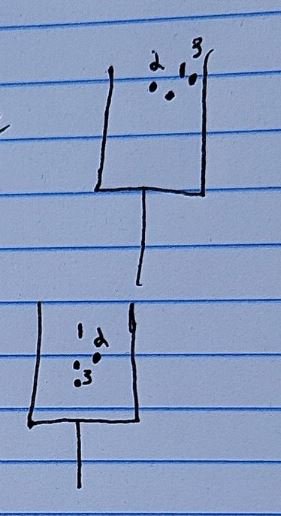 At the open practice, we (the media) were confined to the press box, when we would normally have field access. From our angle in the press box, we can't really see if the ball goes through the uprights. A special thanks to @Talkin215, who tag-teamed Elliott's kicks with me, as I covered the distances, while he was responsible for whether they went through the uprights or not.

And not only did he verify good or not good, he included visuals of where the ball was when it passed through! This is next level (see the pic to the right).

• Arryn Siposs practiced directional / short punting with the line of scrimmage around midfield. He landed punts (all fair catches, so we didn't get to see if he could get them to check up, pitching wedge-style) at the 12, the 12, the 10, the 12, the 11, the 6, the 10, and the 7. Pretty consistent.

• Near the end of practice, security guards had to break up a scuffle between two fans. Things are getting back to normal. 🙏