After a brutal season, Philly steps into the unknown 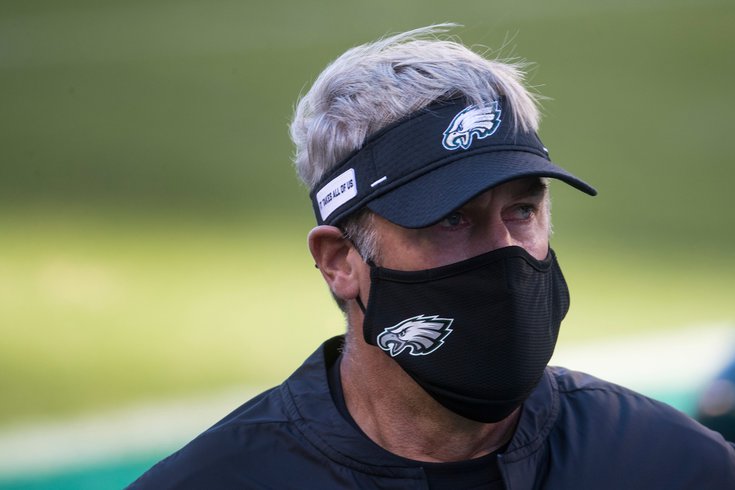 Doug Pederson was fired Monday after five seasons as head coach of the Philadelphia Eagles. He's the only coach to bring the Vince Lombardy Trophy to Philadelphia after the Eagles won Super Bowl LII at the end of the 2017-18 season.

Doug Pederson is officially out as head coach of the Philadelphia Eagles, ending a five-year run that peaked with a victory in Super Bowl LII and ended with a disastrous 4-11-1 record in 2020. His tenure was capped by the humiliation of an overt tank-job in his final game.

Owner Jeffrey Lurie reportedly met with Pederson for a second time Monday in Florida to discuss the coach's future. It appears they both walked away unable to work together, with reports suggesting Pederson was tired of being ordered around by the front office.

MORE EAGLES COVERAGE: Why would any coach sign up to be the next Doug Pederson?

The dysfunction of the Eagles organization could not have been more apparent last season. The roster lacked competitive talent. The wrong players were often on the field. The offensive scheme was an incoherent casualty of injuries that now reliably come in droves every year. The franchise quarterback regressed to an unprecedented degree. Years of poor drafting, salary cap mismanagement and unhealthy internal power dynamics conspired to produce a team that lacked identity, chemistry, direction and organizational trust.

Whether or not Pederson is the man who should have paid the price for those failures will be debated for a long time to come. He certainly didn't put together a convincing case for himself in 2020, yet the question will always remain whether he was hampered by an increasingly active owner and a general manager whose power isn't offset by equal accountability.

After the news broke Monday, Eagles fans, players and NFL observers reacted to the franchise-shifting decision to boot the only man whose resume in Philadelphia includes a Super Bowl title. Here's a sampling of what's been said in the wake of Pederson's dismissal.

Doug Pederson with the one hand beer grab at the parade. So thankful for moments like these. Forever indebted to you coach, thank you! pic.twitter.com/PscPO2I8i6

NOOOO, HUGE mistake by the #Eagles!

Doug Pederson should submit his resume back to the #Eagles without his name on it, and they’d higher him again since he’s the most qualified!

This franchise lucked into Doug Pederson after they wanted Hue Jackson, Adam Gase, and Mcadoo. So excuse me if I dont have the utmost faith in their upcoming job search.

Damn, thank you Doug Pederson. Howie should've got canned before you did smh pic.twitter.com/EQikX8JhJm

I'm gonna be honest, If the report was true saying that Doug Pederson wanted to only promote guys within to new positions on the coaching staff, then it was the right move to move on from him.

Sad to see Doug Pederson fired by @eagles, but it's probably the right move. Even good coaches get in a rut and need to be moved on from (e.g., Andy Reid).

Doug's biggest mistake was not rebuilding his coaching staff after high-profile departures and becoming stagnant.

I love Doug Pederson. But it was just time man. Some people's time comes faster than others even after some success. Nothing is certain just because "insert emotions here*

Sure enough, just three years later, the franchise is in shambles. They capped a miserable season by tanking on national TV, alienated their franchise QB, and Doug Pederson, a coach who should have been dining out on that title for a decade, has already been fired.

I appreciate Doug Pederson. We worked hard & he never flinched. His energy+ attitude was a big part of 2017. Hoping the champ gets back on his feet quickly. I suspect he will.

Doug Pederson won the super bowl against the Patriots with a back up QB, LT, MLB, and a defense that gave up 500 passing yards and forced zero punts the entire game pic.twitter.com/oI11lN8QjH

welp the doug pederson “new normal” was the same normal I knew all along: pain and suffering

Wishing my man Dougie P nothing but the best in the next phase of his life. Great coach who never blinked during our toughest moments over the past 5 seasons. Most importantly made history in Philly!! First HC to win it! SB 52 Champs. Best of luck

One of my favorite memes i ever created.

I for one will miss that big-balled Belichick slayer. Thank you so much for our SB title, Doug Pederson. 🙏🦅 #Eagles pic.twitter.com/z9KfRMXcAZ

I’ll tell you what... I want to thank Doug Pederson for giving me the best sports moment of my life. Hope to see him win again elsewhere 🦅 pic.twitter.com/nd7BNDuYLG

Son: who’s that a statue of?
Me: Nick Foles and Doug Pederson, they won us our only super bowl
Son: ohhh...why’d we get rid of them so soon after?
Me...let’s just go watch us lose

And here's owner Jeffrey Lurie's press conference on the firing of Pederson.