Tradition of prayer at Pottsgrove High School axed after complaint

The decision to end a yearly tradition at one Montgomery County high school's graduation came last year, but only in the past few weeks has it begun to stir the pot of controversy, fueled — as these things often are – by a Facebook post.

But in a shift from years past, the student made some references to a particular religion; specifically, he talked about Jesus.

Last year's graduation is available on YouTube, and the student's benediction makes clear references to Christianity.

The student begins his comments by saying, "Dear heavenly Father," and repeatedly cites Christian beliefs, such as asking for repentance and thanking an all-knowing God.

"In Jesus' name we pray, amen," he concludes.

This garnered a complaint from someone in attendance and forced Superintendent Shellie Feola to review the tradition, which Feola told The Mercury had been non-denominational in the past.

Her conclusion after legal counsel? Graduation is organized by the school and is, therefore, a government-funded event, and so no prayer is allowed.

And that was that. Until it wasn't. In late May, former School Board President Justin Valentine went on the PGSD Discussion Facebook page and posted a link to a story about seniors at an Ohio high school who broke out in prayer at graduation after a similar tradition was canceled due to legal threats.

Valentine's post was deleted, but he took to his personal page to post the article again, saying he disagreed with ending the Pottsgrove tradition and lamenting being censored from the group.

This sparked a debate with current School Board President Rick Rabinowitz, who strongly agrees with the school's decision to end the tradition.

The two have sparred back and forth — both directly and indirectly — since then. On Thursday evening, Rabinowitz posted a legal decision acquired from a private law firm on the matter. Fox Rothschild LLP said in its conclusion, addressed to the board, that the benediction violates the Establishment Clause of the First Amendment.

Related Read: Bill would allow 'In God We Trust' displayed in Pennsylvania schools

It cites past decisions from both the U.S. Supreme Court and the 3rd Circuit Court of Appeals to conclude that at a school-sanctioned graduation ceremony, the prayer is illegal.

Valentine, a Christian pastor at Kingdom Life Church in Pottstown, criticized Rabinowitz for posting the decision online, and a war of words ensued over not just the issue at hand, but of each other’s integrity and public comments made about one another: 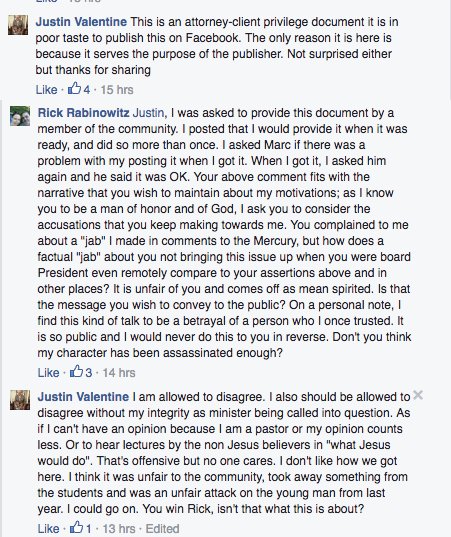 To complicate matters, an internal email acquired by The Mercury apparently shows that it was, in fact, Rabinowitz who complained about last year's ceremony.

(Rabinowitz, who is Jewish, has denied he was the complainant. In a separate post, he accused the newspaper of quoting his emails selectively and said that in his email he was not acting as a parent but instead doing his job as a member of the school board.)

Things could all come to a head on June 7 during a special meeting of the board to flesh out the issue.

There's also a potential compromise. Board member Bill Parker told CBSPhilly students could hold their own, non-formal prayer ceremony that's not sanctioned by the school as a workaround.

Rabinowitz, for his part, backed off some comments made in last year's email leaked to The Mercury, in which he said the student's attempt at a non-denominational benediction was, "at best, a poor job of doing this and I was mightily annoyed."

"While I stand behind my legal concerns about having this type of prayer at our graduation ceremony, I can only say that I don't know what I was thinking when I wrote that email," he wrote on Facebook Friday morning.

"(The student)'s sentiments were genuinely expressed and beautifully worded. I apologize for my harsh reaction to his words and will do my best to use this as a life lesson for the time I have remaining."