Sheila Modglin was struck by a car on Lincoln Drive on Feb. 8 and loved ones are keeping their (and her) spirits up

On a window facing the hallway outside Room 4033 at Albert Einstein Medical Center, there's a message designed to uplift people walking into an often-worrisome environment.

"Optimism is a happiness magnet," the weathered black lettering reads. "If you stay positive, good things and good people will be drawn to you."

The words couldn't better reflect what's been going on behind that glass since Sheila Modglin arrived late last week.

The beloved Dirty Franks bartender and Sunshine Arts founder skated the line between life and death after she was struck by a car on Lincoln Drive in Mt. Airy after finishing her shift the night of the Eagles parade.

One week to the day later, the 56-year-old woman lie in a hospital bed as eight visitors stopped by to continue a perpetual well-wisher's parade.

Surgery to repair her damaged pelvis, scheduled for earlier that day, had been postponed. Talk in the room centered on a dearth of available operating rooms and concerns about Sheila's blood pressure.

There's really no major rush. The leg fracture and other injuries remain on the back burner as her brain injuries heal.

'OUR FAMILY IS VERY POSITIVE'

Sheila is not yet awake; her breathing is still regulated by a respirator. While she remains in a medically induced coma, her brother Rick and sister Beth talk about seeing positive signs of life, including fluttering eyelids and toes responsive to touch.

Sheila's head was shaved for the emergency surgery to remove a portion of her skull to help alleviate brain swelling. Comparisons to the singer Sinead O'Connor are made.

Like every patient, she wears a standard blue hospital gown and grey socks.

Happy Valentine's Day and Get Well Soon balloons decorate a room governed by a two-visitors-maximum rule that's often been violated.

On her chest is a photo of Saint Padre Pio featuring the phrase, "Pray, Hope and Don't Worry." Beth said she got it at a local shrine to Padre Pio; it just felt right.

"I asked them if I could put it on her and they said yes, but it might get lost," Beth said. "It's OK. If it gets lost, it's easy to just get another one!"

"There are no guarantees. There could be a 100 percent recovery, or she could plateau somewhere along the way." – Rick Modglin

In this hopeful room, the intense worry in the minutes, hours and days right after the accident that changed Sheila's life forever has, to some degree, subsided.

"Our family is very positive," Rick said. "That's just the way we are: Just a positive-thinking family."

Visiting hours are from 9 a.m. to 9 p.m. Friends and family have worked out a schedule to ensure she's not alone if she doesn't have to be. Beth took the 4 to 6 p.m. shift.

"Oh, I like that," he responded, intimating that ornery means Sheila is alive, well and somewhat aware of what's going on behind those closed eyes.

A friend named Uncle Mike would soon arrive with his wife, as would friend Dick Moberg, who is working on a documentary about Sheila and recovery from brain injuries.

So too would a woman named Jody, who whispered into Sheila's ear that she wrote in the journal that visitors are passing around for Sheila to read when she wakes up. (Rick's also taking pictures of his sister's progress so she'll be able to see what she can't now.) 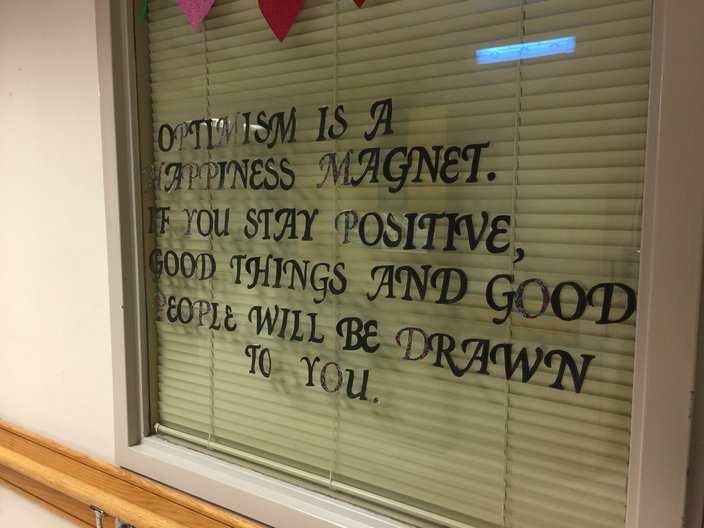 An uplifting message facing the hallway on the fourth floor at Albert Einstein Medical Center in Philadelphia.

Out in the hallway, Rick talks about a text message he received from the daughter of the man whose vehicle struck Sheila in the middle of a Lincoln Drive block near Cliveden Street. He thinks her sister darted out into the street and didn't see the car coming.

Despite initial concerns that it was a hit-and-run incident, the family would learn that the driver remained at the scene, called 911, stayed with Sheila until medics arrived and, in doing so, very well may have saved her life.

There's some lingering frustration about the delay by police to give the family information.

If they'd just been told it wasn't a hit-and-run when they first asked, it would've tamped down a considerable about of frustration. It would also have been nice to find out immediately where Sheila had been taken for treatment.

Still, Rick vouched for law enforcement as a whole. He just hopes they take this as a teachable moment.

"At least give us some basic information," he said.

Sheila remains surrounded by positivity. That tone was encouraged by a meeting that her family had with her surgical and care team earlier this week.

"There are no guarantees," Rick said. "There could be a 100 percent recovery, or she could plateau somewhere along the way."

Complicating matters is the fact that the family doesn't think Sheila has health insurance. (They won't really know until Sheila wakes up and allows the hospital to give relatives her keys so they can check inside her safe at home for documentation.)

"I always told her to get insurance, but she would always say, 'Ah, angels will take care of me.' Well, they are," Dick Moberg said in the hallway. "It's a spiritual thing. Good karma out, good karma in."

Rick said he plans on having an educational element to that event, providing information about drafting living wills and setting up power of attorney, which were critical lessons his family had to learn amid a frenzy of activity.

He was asked when he realized that the situation was taking a turn for the better. Days are bleeding into one another, but he thinks it was probably Monday.

"At first, there was no color in her eyes. They were cloudy, even in the whites," he said. "Then, they were checking for pupil dilation and I could see the beautiful color coming back, a green, hazel mix. That's when color started coming back to her, skin too. It's getting better is what I thought."

The family is well aware Sheila has a long road ahead of her, but they're keep their spirits up and hoping she's paying attention behind those eyes that should be opening any day now.