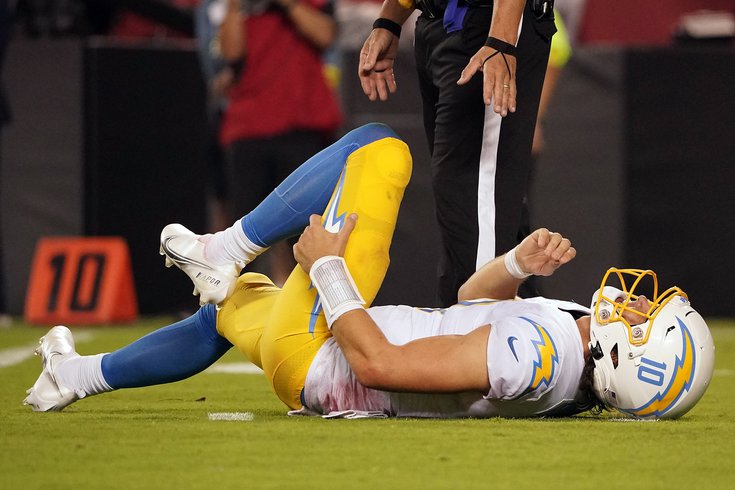 Another week, another slew of annoying fantasy football injuries.

A bunch of key players were unexpected scratches this week, with a bunch more sustaining what appear to be minor injuries in the middle of their respective games.

What's the latest on these players as we get ready for the third week of fantasy football action? Here's a look at what we know about some of these ailments:

Herbert's heroic performance may have cost him future playing time, as the Chargers are currently listing their star QB as day-to-day with fractured rib cartilage. That certainly doesn't sound good, but he's shown he has incredible toughness and could start in Week 3. Keep an eye out in practice all week on how much he's able to do.

Thank goodness the Niners decided to hang on to Jimmy Garoppolo. San Francisco's former top pick, Lance, rolled his ankle on a rush attempt and according to Adam Schefter, he'll undergo season-ending surgery. It will be Jimmy G's team from here on out.

It's not the best news to learn that Conner, who has had ankle issues in the past, hurt an ankle in the third quarter Sunday. He got taped on the sideline but did not return to the game. Is this severe enough to cost him additional playing time? Eno Benjamin and Darrell Williams could be fantasy relevant next weekend. Stay tuned.

The Colts looked god awful without Pittman in their Week 2 loss to the Jaguars, and the team is no doubt hopeful the quad injury he shockingly sustained in practice mid-week last week will not keep him sidelined. If he sits out practice when the Colts return to the field it will surely be a red flag for Week 3. There did not appear to be any other reliable relevant WR to roster from Indy.

Jeudy got hurt on an end around running play and clearly felt enough pain in his shoulder that he dropped the football. He could join Tim Patrick as another injured Denver wideout, leaving Russell Wilson and company even more short-handed.

After taking a pretty hard hit to the head during his game-losing fumble Sunday, Renfrow is being evaluated for a concussion and his status will be up in the air for a bit as his condition is fully accessed.

In Dallas' dramatic win Sunday, Schultz hurt his ankle and exited the game. It was reported postgame, however that an ACL tear was avoided and the injury is not considered to be serious. Whether he'll miss time is currently unknown.

Other players who were out in Week 2 who may return in Week 3: