North Philly's biggest fan does it all, does it well 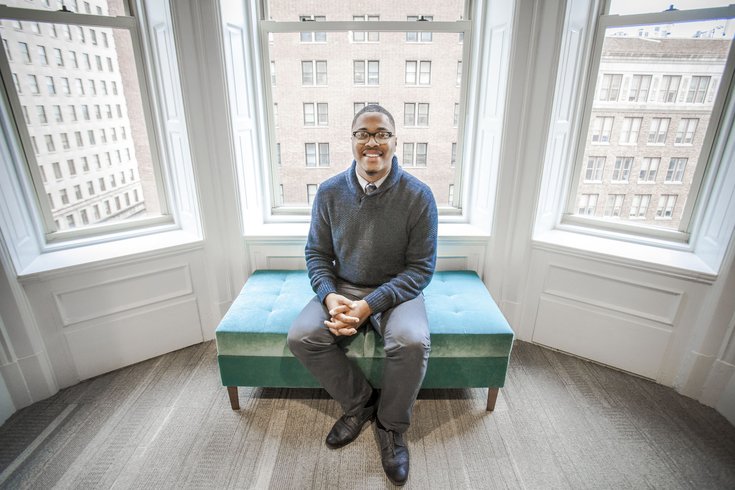 You may have seen the phrase "You have the same amount of hours in a day as Beyonce" emblazoned on motivational mugs or beaming out from an Instagram post. But the phrase would likely inspire just as much enthusiasm for the day ahead if "Beyonce" were replaced with "Malcolm Kenyatta-Green."

By day, Kenyatta-Green is the Member Engagement Coordinator at the Greater Philadelphia Chamber of Commerce. He is also the youngest member of the board of directors of the Liberty City LGBT Democratic Club, the driving force behind the Muhammad and Mary Kenyatta Foundation, a Philadelphia 2015 BMe Leader and the co-director of Dr. Kimmika Williams-Witherspoon's play "You Gotta Eat Dirt Before You Die." (The show, a story of family set during the 1980's AIDS epidemic, returns to Philly for the second time Dec. 2-6.) Oh, and he's only 25.

In his free time, Kenyatta-Green is a political consultant, a mentor and North Philadelphia's biggest fan. When we chatted with Kenyatta-Green about his accomplishments on a sunny Monday morning, he spoke with so much cheer that one suspects he could take on a few more roles if there were more hours in a day.

How did you get involved with “You Gotta Eat Dirt Before You Die”?

I’m North Philly through-and-through, went to Temple, grew up right around the corner from Temple. One of my mentors [Dr. Kimmika Williams-Witherspoon] when I was there wrote this play … She said, “You know what? I want you to just read this script that I wrote while I was in grad school. It’s semiautobiographical, just look at it and tell me what you think.” I said OK and once I read it I said, “You have to give me this play. I need this play and I have to produce it.”

I’m always looking at what are the issues that affect North Philly and how can we bring renewed focus to those issues. One thing that we know is that rates of HIV infection among young people of color are on the rise. It’s very exciting that we have things like PrEP and a lot of proliferation of condoms and sex ed., however, our young black, Latino population is still being hit hard by this. This is something I think we don’t talk about as much, or with the same intensity, that I think the epidemic really deserves. …So we do it in honor of World AIDS Day as a way to commemorate that and we do it to draw attention to a disease that’s still hurting our community, especially areas like North Philly.

How did the Muhammad and Mary Kenyatta Foundation come about?

My grandfather was a civil rights activist for a number of years. He was born in Chester, moved back in Philadelphia for some time and did a lot of his activism here. I was honored with a national BMe leadership award, and that’s a program that started through the renown Knight Foundation that was spun off to its own self-sustaining organization and I was honored through them ...

"We’re showing families who live on those blocks who have never maybe seen a gay married black young couple, openly living in their truth."

I think North Philadelphia gets a horrible rap about what it means to be from there, what the area is. It’s a beautiful place with a beautiful and thriving history and my grandfather fits very neatly into that. He believed that the way to get true justice really always starts with economics. So how do we get people jobs? How do we get people believing in themselves and believing in their neighborhoods again? I think a part of the way that we do this is to have a clean neighborhood that they’re excited to come home to …

We decided that what we’re going to do is take a block-by-block approach. We’re going to start with one block and say hey, what can we do to improve quality of life on this block and how can that contribute to the larger neighborhoods? We’ve done book bag giveaways, we’ve done cleaning up the block. … It’s also a way to keep my grandfather’s legacy alive. He was an amazing man … if I can get even 10 percent of all he was able to accomplish, then I think we’ll have something really good.

Tell me about your work with Liberty City LGBT Democratic Club.

I always have that focus on how do we reengage folks into having conversations about North Philadelphia and ultimately ... how we treat LGBT people. I think that for so many people of color, particularly, there’s a cultural tradition of being adversarial towards the LGBT community. What me and my husband [Terrell Kenyatta-Green] are doing by the simple fact of living in North Philadelphia, being there, being as involved as we are, we’re showing families who live on those blocks who have never maybe seen a gay married black young couple, openly living in their truth.

… I think that’s very powerful and transformative because I think what our kids need more than anything else is an image of what they can aspire to. I think the image can’t just be this image of brokenness and decay and all the negative things that we repeat all too often. It can also be the image of a guy that is from this community, went to school in this community, stayed in this community and is now investing in this community because I believe in it. My husband and I, we make enough. We could’ve lived in some condo downtown, I guess, if we wanted, but I think it’s very important to be there and I think our presence is valued.

At Liberty City that’s what we’re trying to do as well and to make the LGBT community more inclusive of trans people, of people of color. There’s so much work we have to do there as well and I’m proud to play a small part.

So does your personal mission align with your work at the the Greater Philadelphia Chamber of Commerce?

Absolutely. I like to say that my job is, at it’s core, I’m connecting great people with other great people and great events. Basically what that means is I help relationship manage at the Chamber. I’m on our member engagement committee. It’s congruent with my mission because at the end of the day, what people need is jobs. I’m having conversations every day with business leaders from across the spectrum…It’s very important to have somebody with my background, with my focus and with my experience in the room with these folks to say, hey, do you know about North Philly? Well there’s a place down there where you can build a store if you want…

What are some of your favorite things about North Philly that don’t get enough attention?

I’m all for Temple finding new ways to invest in the area, but I think that we also have to think of, you know, the Uptown Theater. It’s a historic theater that has been there for years and I know Linda Richardson, who is running that organization, which is trying to drive more attention and focus to that beautiful theater. Could you imagine investing in that theater and bringing concerts and stuff back to North Broad Street?

There’s also a bunch of amazing nonprofits like Grands as Parents, that works with kinship care, with families that for whatever reason a parent can’t take care of their child so a grandparent or auntie or uncle steps in. They are an organization that’s doing phenomenal work that is often looked over.

You do so much! How do you get it all done?

You know what, I have seen what it means to give up. I have seen so many people who have given up who have decided that whatever their fight, their struggle is, that it’s not worth fighting.