An artist's rendering of the Philly mascot will benefit regional organizations 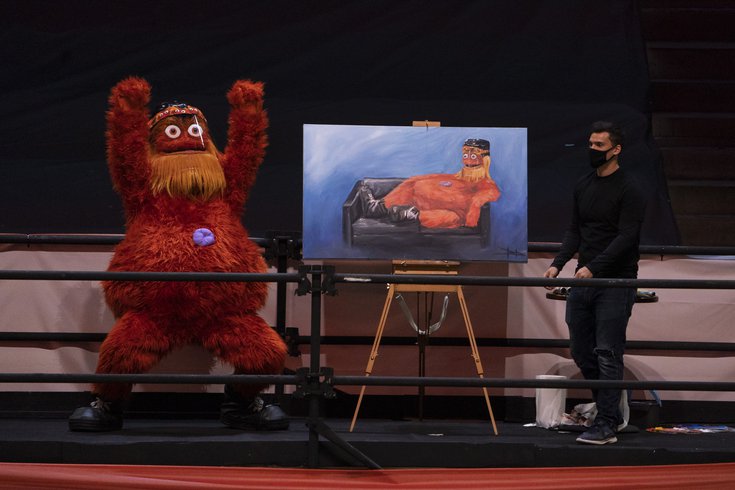 Artist Benjamin Davis painted Philadelphia Flyers mascot Gritty in the nude on Feb. 3 at the Wells Fargo Center. A Flyers Charities sweepstakes will give one lucky fan the opportunity to own the masterpiece.

Where would you hang a nude painting of Gritty in your home? Living room? Hallway? Basement?

If you're willing to donate to Flyers Charities, the nonprofit wing of Philly's beloved hockey team, you may end up wrestling with this important home decor decision.

The Flyers announced this week that they are holding a charity sweepstakes to give away the painting of Gritty that was completed by artist Benjamin Davis during a Feb. 3 home game at the Wells Fargo Center.

RELATED ARTICLE: 23 things we've learned about the Flyers so far this season

The piece, entitled "Gritty Reclined," will be given away based on a drawing planned for March 16. The winner will receive the painting at the conclusion of the Flyers' season.

Remember the February 3 game? Artist @bendavisart came to paint Gritty? Well, we are bringing you a chance to win the ORIGINAL painting! You can enter to win with our first SWEEPSTAKES! Chances to win can be purchased at https://t.co/Y49o9pcdjU for $10, $20, $50 or $100! 🎨 pic.twitter.com/vnJEbojoUe

All proceeds from the sweepstakes will benefit organizations throughout the Philadelphia area. Flyers Charities has contributed more than $30 million to support local causes since it was established.

Davis, 28, completed the painting over a period of about 90 minutes, during which time he told PhillyVoice he "spaced out" because of Gritty's overpowering presence.

"His gaze, his body — his essence, really. His belly button," Davis said.

For a little bit of charitable giving, you could be the one to spend the rest of your life enthralled by Gritty in his natural state.