And signed him to a two-year extension 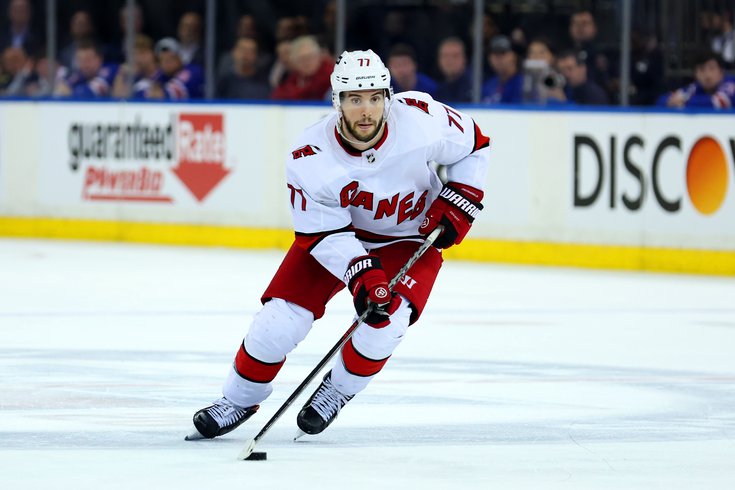 Controversial defenseman Tony DeAngelo has reportedly been traded to the Flyers.

Day 2 of the NHL Draft is kicking off with a move that isn't going to sit well with many Flyers fans.

The club traded for controversial defenseman Tony DeAngelo, sending their 2022 fourth-round pick, a 2023 third, and a 2024 second to Carolina. The Flyers are also getting a 2022 seventh-round pick (220th overall) back from the Hurricanes.

He's reportedly been signed to a two-year extension worth $5 million per.

DeAngelo put up 51 points and went plus-30 in his lone season in Carolina and, as a player, does bring value as a right-handed shot who can run the power play.

It's the person who has proven to be the problem.

The 26-year old has a long list of character issues going all the way back to juniors, when he was suspended twice in the OHL for violating its harassment, abuse, and diversity policy, and through to the pros; where he was suspended for abuse of an official with Arizona in 2017, was combative on social media — especially in his support of Donald Trump and downplaying the severity of the COVID-19 — and was ultimately ousted from the New York Rangers after multiple incidents, put over the edge by an altercation with goaltender Alexander Georgiev after an overtime loss to Pittsburgh in early 2021.

With his career on thin ice, the South Jersey native was able to keep his head down under a one-year contract with Carolina, and though the hockey world hasn't forgotten, the Flyers are hoping things stay that way.

"We're very happy to add Tony to our team and I know he is very excited to join the Flyers," general manager Chuck Fletcher said in a statement. "We did our due diligence and we strongly believe in Tony and his ability to help our team. He is a right-handed shot who moves the puck extremely well and will drive offense from the back end for us.”