After informally working out for a week or so at Skate Zone in Voorhees, the Flyers’ vets were back on the ice for real. The first practice of training camp was on Friday morning, and here’s what I saw:

9:35 a.m.: The Flyers hit the ice, and luckily for me, it’s easy to tell what the lines are because they’re color coordinated. Dave Hakstol emphasized after practice that these combinations aren’t set in stone, but this is how the Flyers started training camp. Not exactly the most positive groupings for The Brothers Schenn:

9:55 a.m.: In a transition 2-on-2 drill. Michael Raffl beats Mason with a nice move. After last season, it’s not a surprise to see the 26-year-old on the left wing alongside Claude Giroux and Jake Voracek.

10:00 a.m.: I was curious if any of the young defensemen (especially Ivan Provorov) would get a shot with the vets, but the kids will have to settle for the afternoon session (day care) on the first day. As expected, Scott Laughton got the bump up to the main camp.

10:05 a.m.: I haven’t been here even close to long enough to have an informed opinion, but those who do say the pace of this first practice is unlike anything they’ve ever seen. So basically, Dave Hakstol is Chip Kelly without rap music and smoothies. I will say that it’s hard to keep up with what is going on because players are flying up and down the ice.

10:30 a.m.: Both goalies, Mason and Neuvirth, generally look sharp as their teammates get to fire shots at them in 3-on-0 drills.

10:43 a.m.: The Flyers slow it down and do some system work, implementing how Hakstol wants them to move the puck in the offensive zone.

10:50: In another competitive transition drill, Wayne Simmonds falls down and ends up on the ice behind the net. It wasn’t the only time that would happen during the practice.

11:01 a.m.: This is my first real look at defenseman Radko Gudas, acquired from Tampa Bay in the Braydon Coburn trade last March. The big man pushes up the ice and leaves a nifty drop pass to Sean Couturier, who beats Mason.

11:05 a.m.: My favorite drill of camp, mostly because it’s easy to tell what is going on. Two players “battle” (which is what the drill is called) for the puck at one faceoff circle until the whistle blows and they instantaneously skate as fast as they can to the other end of the ice. Waiting there is a loose puck, and the player who gets to it first has the chance to shoot on the goalie.

11:07 a.m.: In that same drill, Luke Schenn essentially body slams Michael Raffl to the ice when the whistle blows, skates to the other end, and scores on Neuvirth. Michael Raffl, you just got JACKED UP (and drew an obvious penalty in a game).

On another note, it always amazes me how many Flyers fans show up to watch practice: 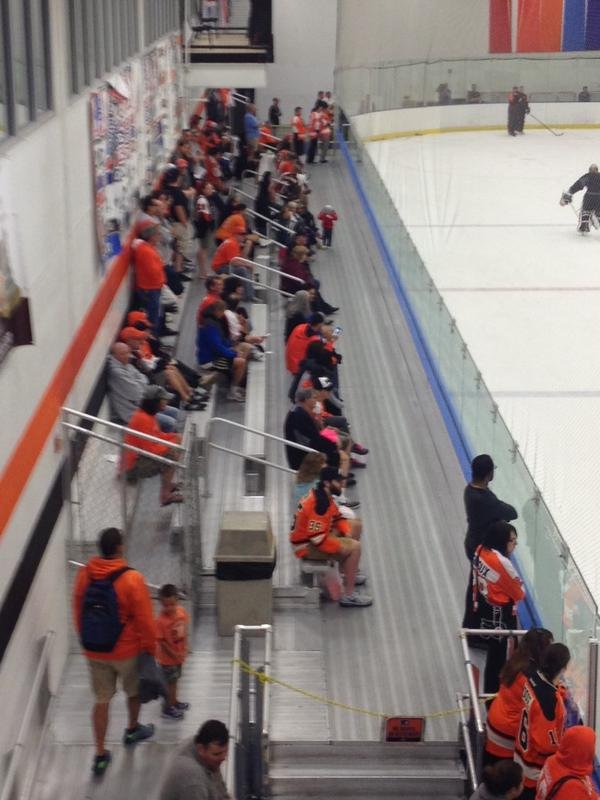 11:12 a.m.: Both nets are moved up because it’s time for some conditioning to close practice. The players use the nets as obstacles to skate around, and there are some tired legs on the ice.

That's all for today. We will see if anything changes tomorrow.