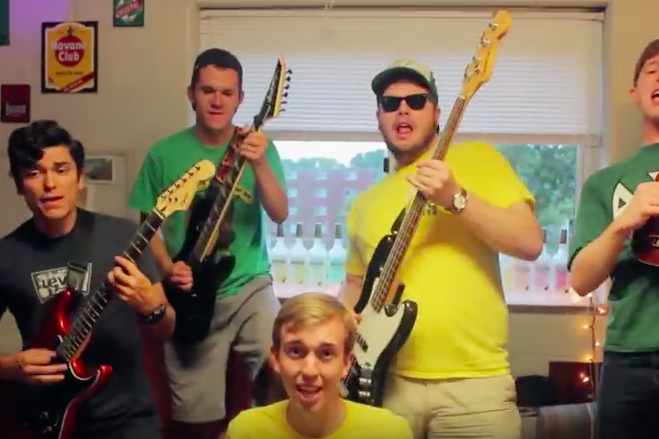 Brothers of Delta Sigma Phi at Transylvania University in Kentucky lip-sync to Taylor Swift's hit, "Shake It Off."

After their Taylor Swift lip-sync video went viral last year, the brothers of a fraternity in Kentucky were given a special gift from Swift herself: free tickets to one of her concerts.

This week, they put those tickets to good use.

Members of the Delta Sigma Phi Beta Mu fraternity at Transylvania University posted a video last September of some of the brothers lip-syncing to Swift's hit "Shake It Off."

The brothers put the video to good use, utilizing their YouTube channel to raise money for leukemia research.

The video quickly went viral, eventually catching the attention of the singer.

Impressed, Swift offered every member of the chapter two tickets to her "1989" tour.

I'm personally inviting all of these guys (and a date!) to a show on tour next year, it's on me. Nailed it, bros! http://t.co/PuBjqkf27n

They continued their charitable efforts this week by giving half of their tickets to the local Big Brothers Big Sisters of Bluegrass for Tuesday night's show in Lexington, Kentucky, WKYT reports.

"We all got two tickets so we all thought this is just a gift and it would be a shame not to do something good with it," fraternity member Barton Lynch told WKYT.