Frozen in Fishtown: Life not yet back to normal after blizzard

Resident on Philly snow removal effort: 'I don't remember a job this bad, ever' 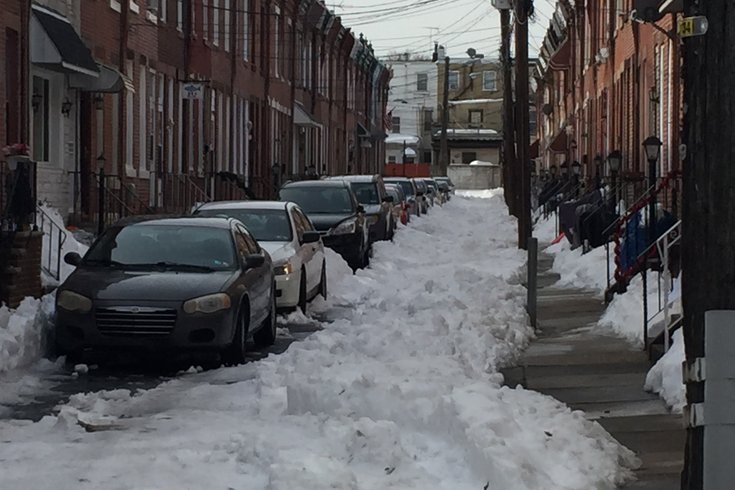 Snow is still pilled up on Livingston Street in Fishtown on Tuesday morning.

After a weekend storm covered the Philadelphia region in more snow than the area has seen in quite some time, local residents were still digging out on Tuesday.

In fact, in the city's Fishtown neighborhood, residents complained that they haven't seen many snow plows, and many haven't been able to move their cars since the snowfall began last week.

"They didn't plow here until this morning," said Neal Resnick, as he shoveled snow at the intersection of Berks and Thompson streets. "They've done a really poor job."

Resnick said after the storm dumped more than 20 inches of snow in Philadelphia, city services hadn't responded to clear snow in Fishtown until early Tuesday morning.

On Monday, and throughout the weekend, that cars were getting stuck in the middle of Fishtown's roads, Resnick said. He even claimed a truck had been stuck on Memphis Street for as long as three days.

"I don't believe this is the mayor's fault. I don't blame him," Resnick said. "But, I'd fire the person in charge of this."

A Philadelphia resident since 1988, Resnick said he'd not seen such a poor response to a snowfall, ever, during his time in the city.

"I don't remember a job this bad, ever, in this neighborhood," he said.

"It took me over an hour," he said. "At every turn, there was somebody stuck."

At Palmer and Thompson streets, Janet McMarrow, who drove to Fishtown from Port Richmond on Tuesday to care for her ailing mother, said the roads throughout the River Wards were still a hard-to-navigate mess.

"People are sliding and getting stuck," she said. "They really gotta come back out here with salt to get some of this melted down." 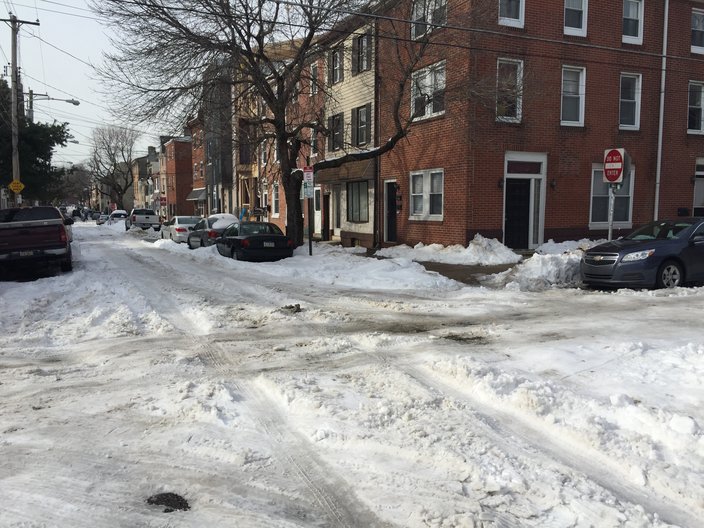 A snowy intersection at Susquehanna and Thompson Streets in Fishtown. Locals said cars were stuck in the area often on Monday.

Another concern, McMarrow said, was that the city had stepped up enforcement against those who save parking spots after digging them out. She said that she knew people weren't allowed to save spots, but it was something of a neighborhood "tradition."

"You can't save a parking space no more," McMarrow said. "The city tells me that if a pipe breaks out front, it's my property. But, if I shovel a spot out, in front of my house, it's not."

McMarrow said her son, on Monday, spent hours digging out a spot, with enough space for two cars to use, but when he came back, both spots were taken by one car.

"It's driving me insane," she said.

Down the block, Zoa Schisler agreed.

"We have more units here than we have spaces," she said. "And, they all want to take up two spaces!" 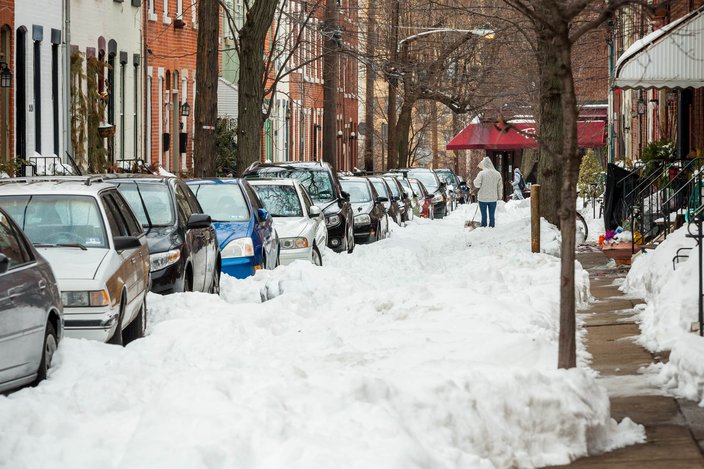 Fishtown wasn't the only neighborhood still waiting for a plow on Tuesday. Katie Kent lives on 2400 block of Meredith Street in Fairmount, which as of 10 a.m. Tuesday had yet to be plowed, as well.

Schisler argued that some who rent in the community might be used to parking in areas outside of Fishtown, where there is more space. These days, with more and more people moving into the community, Schisler said, parking is at a premium.

Up on Livingston and Norris streets, one of the neighborhood's smaller streets that hadn't been touched by plows as of Tuesday morning, two women, who declined to give their names, also complained about the city's response to the storm.

"People in Fishtown aren't happy. Just look at this mess," said one. "If someone was getting murdered, no cops could get down here."

As the women spoke, a large plow drove slowly down Norris Street and both women laughed.

"Look at that. That's the first plow I saw, and it didn't do that much," she said.

On Monday, Mayor Jim Kenney told Philadelphia residents to be patient while the city continues ongoing snow cleanup efforts. And, at Palmer Cemetery, caretaker Jim Kingsmill said he didn't see the snow in the neighborhood as too much of a cause for concern. Instead, he said patience was the best way to handle the cleanup.

"We got at least 22 inches of snow. That's an inordinate amount of snow," he said.

He argued that while some in the neighborhood may have complained about the city's cleanup efforts, the city had been doing the best that could be expected.

"I think people are complainers by nature. I know I complain a lot, he said.