By Sinead Cummings
PhillyVoice Staff
Parties Game Of Thrones
from 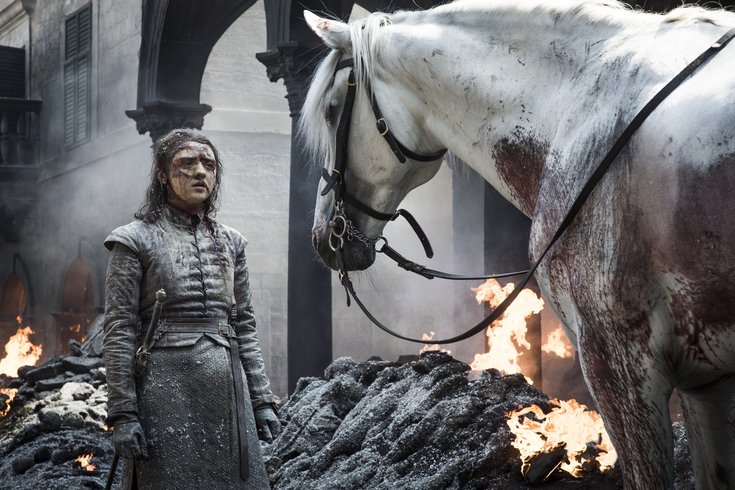 What will happen in Sunday night's "Game of Thrones" series finale?

"Game of Thrones" Episode 5, "The Bells," was shocking. Warning: spoilers ahead.

Daenerys made the decision to burn thousands of innocent people at King's Landing, Arya didn't kill Cersei, instead she and her brother/lover Jamie died together when the Red Keep's structure collapsed, and it seems like both Jon and Tyrion fear the Mother of Dragons has gone full Mad Queen.

So what will happen now that the bloodbath is over? Well, HBO's Episode 6 preview doesn't show much.

RELATED: "Game of Thrones": Twitter reacts to Episode 5, "The Bells"

Will someone kill Dany? Who, if anyone, will sit on the Iron Throne? What's up with that pale horse?

In Sunday night's episode we'll (hopefully) get answers to all our burning questions. But no matter what happens in the series finale, it's going to be emotional for fans to say good-bye to HBO's "Game of Thrones" after years with these characters.

For such a big finale, Philly's La Peg decided to throw a big watch party for fans. Episode 6 will be shown on the big screen in the venue's theater, which has 240 seats that will be available on a first-come, first-served basis that evening.

There will be "Game of Thrones"-themed food and drink specials beginning at 5 p.m., then at 8:30 p.m. the theater doors will open.

"We’re looking forward to a lively pre-party, followed by one last exciting visit to Westeros as it’s meant to be seen – on the big screen," said general manager Liz Boleslavsky.

Featured drinks will include:

Featured dishes will include:

Admission to the series finale watch party is free.