'Game of Thrones': Twitter reacts to Episode 5, 'The Bells'

God save the queen ... the mad queen 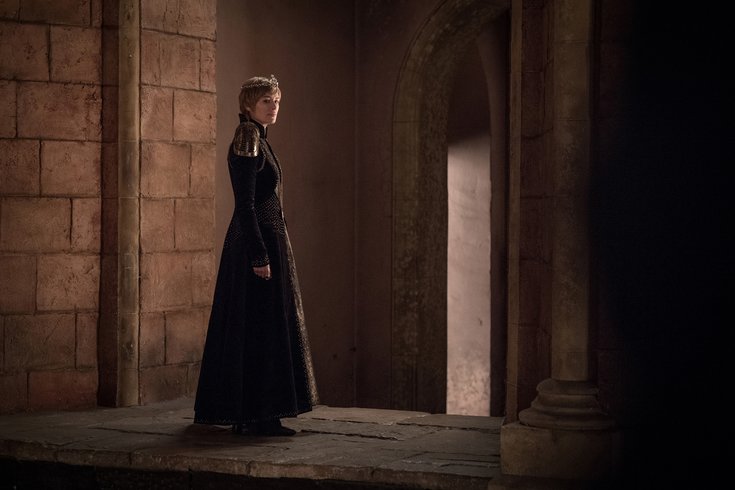 "Game of Thrones" episode 5, "The Bells," aired Sunday night, and people have some thoughts on the mad queen storyline. Seen here is Cersei, played by Lena Headey, in King's Landing.

'Game of Thrones' is one episode away from the series finale, and we have some concerns after Sunday night's hell-raising episode. All welcome the birth of the mad queen.

(NOTE: If you have not watched Sunday's episode yet, be aware there are spoilers if you continue reading.)

After finding out that Jon should be king, Varys tried to convincing Tyrion to turn against Daenerys. Tyrion says no, and because he trusts Dany (mistake), he told her what was happening.

MORE 'GAME OF THRONES': Twitter reacts to 'Game of Thrones' Episode 4, 'Last of the Starks'

Well, Dany didn't like that very much, and Varys was soon ordered to death for treason. RIP Varys.

From there ... well, it got better before it got worse. As the forces stood in front of each other, Dany came in, burning down the iron fleet with vengeance, and taking down the Lannister army. It almost looked like everything was going to work out as it should. But this is GoT, and happiness isn’t exactly an emotion these characters are capable of feeling.

To all the #GameofThrones fans complaining! pic.twitter.com/jGHTPvlhJx

(Also, meanwhile, Cersei is determined nothing bad is going to happen and that her men will fight by her side despite watching everything burn. LOL, Cersei.)

Grey Worm and Jon Snow storm into the city where they are greeted with more soldiers. But the men drop their swords, surrendering, and we soon hear the bells toll.

Now, this would seem like such good news, right? And it was. For about two seconds. Until we get a close up shot of Dany with this crazed look in her eye.

Us knowing she’s gunna burn kings landing to the ground

Us when she actually does it: #GameOfThrones pic.twitter.com/qkxn7Ha4Be

Rather than stop, she keeps going. Burning everything to the ground. Even Grey Worm starts attacking men who surrendered, and before you know it the whole place is burning down and no one is safe.

Dany and Grey Worm after the war #GameofThrones pic.twitter.com/Fp8aGwxp4k

Meanwhile, Tyrion and Jon, who stood by Dany, are now watching everything burn to the ground, shocked as if they didn’t expect Dany to go all Mad Queen – despite warnings from literally everyone else, including Sansa.

Me, Jon, and Tyrion : oh thank God , that was a close one

Me , Jon, and Tyrion : pic.twitter.com/Ca7NFga5jr

Sansa sending a Raven to Jon and Tyrion like #GameOfThrones pic.twitter.com/yOHy7vZgqg

The castle starts to crumble thanks to the hellfire from Dany and Drogon. Cersei escapes underground before finding Jaime. The Hound and The Mountain have the most hardcore fight scene anyone has ever seen, because seriously, who just pulls a knife out of their eye?!

The mountain when the hound stabbed him in the eye #GameofThrones #got8 pic.twitter.com/MqkgmhFZw3

In the end, Cersei fell to her death with her brother by her side, being crushed to death by the crumbling castle. Though, many fans were not happy with the way she went out.

8 seasons. 8 whole seasons to plan the most mind blowing, out of this world death of Cersei Lanister.

You'd think Arya would kill her

You'd think Jaime was going back to kill her

You'd think Drogon would burn her

Cersei was killed by some rocks #GameofThrones pic.twitter.com/5puSTESa9M

Meanwhile, Ayra is out here trying to fend for her life.

If you or a loved one has been diagnosed with Mesothelioma you may be entitled to financial compensation #GameOfThrones pic.twitter.com/p0dD4lLkc4

But in the end, all we’re left with is one very, very mad queen. She essentially turned into her father, Aeyrs II Targaryen, and as it turns out, this episode was foreshadowed in Season 2 when Dany had a vision of seeing the Iron Throne covered in ash.

#GameofThrones #GameofThronesseason8episode5
House of Undying showed Dany's future in very early seasons of GoT..
people just assumed it was snow in her vision, but it was ashes pic.twitter.com/leJDCrWdL7