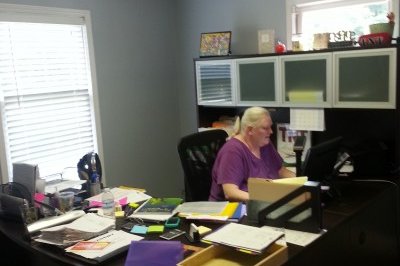 A Georgia private school principal has apologized after making what many considered racist remarks at a graduation ceremony Friday.

During the graduation ceremony for TNT Academy in Liburn, Georgia, the school's founder and director Nancy Gordeuk attempted to grab the attention of graduates and their families after accidentally dismissing them before the class valedictorian could give his speech.

Several recorded videos of the event show Gordeuk saying those not paying attention were being "rude" and calling a man who walked around taking pictures a "goober." Then, she made this remark after admitting that she had made a mistake in the graduation's program:

"Look who's leaving, all the black people."

Several graduates and their families, both African-American and white, can be seen in the video leaving following the remark.

Gordeuk has since apologized for her comments. In an interview with Atlanta news station WSB-TV, she said she had been frustrated with the graduation ceremony but said she was "so sorry" for what she had said. Gordeuk also said she has received death threats since the video went viral and that she hadn't slept or eaten since the incident.

In an email to CNN, Gordeuk also expressed her regret for the comments she made:

"I deeply apologize for my actions made in the emotional state of trying to let this last student finish his speech. I take a personal interest in the success of every student that comes through our doors without regard to their race, religion or ethnicity."

In an interview with NBCNews, Gordeuk related her side of the story:

"My side is I'm not a racist. I didn't know 'black people' was a racist term. I didn't say the N-word or anything like that because that's not in my vocabulary.

According to WSB-TV, Gordeuk says she is unsure if TNT Academy will have her back.