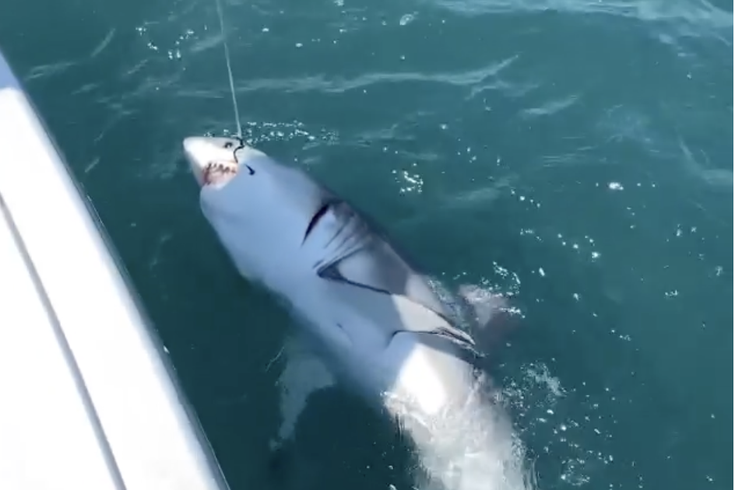 A juvenile great white shark was caught and released by sport fishermen about a mile of the coast of Seaside Heights, N.J. on June 13, 2021.

A group of fishermen off the coast of New Jersey were in for a surprise last weekend when they hooked a baby great white shark near Seaside Heights.

The shark was caught by sport fishermen on the Reel Innovation Sportfishing boat, owned by the fishing supply company based out of Warminster, Bucks County. The boat docks in Harvey Cedars, Ocean County.

A Facebook video of the catch shows the shark beside the boat as the crew prepares to release it. Captain Jeff Warford confirmed the shark was hooked about a mile off the coast of Seaside Heights in about 50 feet of water. The shark measured about 7 feet and it took about 20 minutes to safely free it.

First for me. Baby Great white we caught today a mile off the beach. Luckily the @lindgren_pitman circle hook landed right in the corner of its mouth for a safe release. @jakebowless @thefishermanmag @cortlandline @fish_shimano_north_america #jaws #sharkweek

Warford and his crew were out fishing for thresher sharks, a species that is legal game in New Jersey and tends to be spotted along the East Coast searching for bunker fish this time of year. Thresher sharks, known for their long caudal fins, can grow to be more than 20 feet in length including the tail. They're not considered a threat to humans in part because they have small mouths.

At first, Warford said he and his small crew thought they'd caught a thresher fish. The shark had bit the line about 75 feet from the boat and then charged at it, swimming under the bow. Warford fought with the shark for about 15 minutes before he realized what he had.

Warford said he's been fishing for 35 years and has been a pro captain since 2013. This was the first time he ever caught a great white shark and only the second time he had ever seen one.

"Typically fishermen, if they do see a great white, they only see it," Warford said. "We were using bunker and this one was super aggressive. I think it was young and dumb, didn't know any better. A bigger great white, they know something's up when they see the line. This young one obviously was just hungry and wasn't smart enough to see that it was attached to a line."

Great white sharks have become more common along the Northeast coast in recent years due to several factors. Conservation efforts and a mandate on the use of circle hooks for sport fishing, as seen in the video above, have helped populations recover and reduce mortality when they are inadvertently caught. Warming waters and booming seal populations also have drawn great white sharks further north in greater numbers.

Another white shark reported locally near shore. It’s good to see these critters making a come back and it’s also great...

Public education about great white sharks has been enhanced by the work of OCEARCH, a nonprofit organization that collects and analyzes data on shark populations. Tagged sharks are tracked as they travel along the coast, creating pings that help researchers understand the sharks' movements.

As recently as last Saturday, a female great white shark named Martha – about 7 feet in length – was pinged off the coast of Asbury Park and had been as far south as Long Beach Island in late May. Another female sub-adult great white shark named Andromache also was tracked miles off the South Jersey coast in late May, as far south as Avalon and as far north as Surf City. Andromache measures about 10 feet, 8 inches in length.