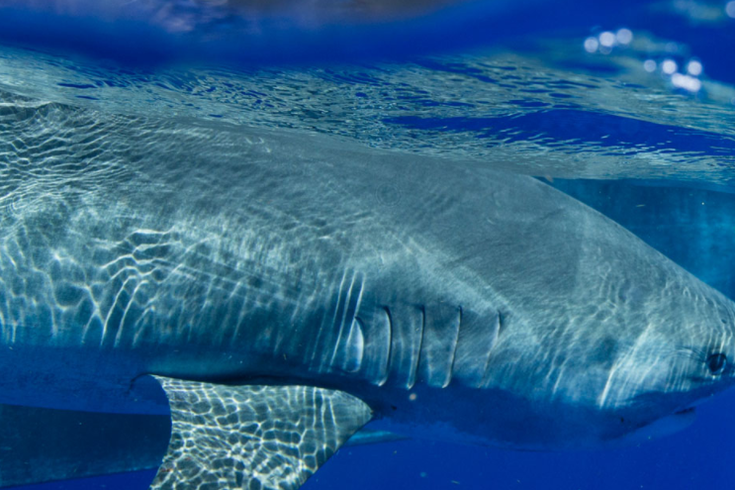 Ocearch, a nonprofit oceanic research organization, has been tagging sharks since 2007.

A female great white shark, whose tracking device pinged researchers four times since the weekend, looked like she could be leaving the Jersey Shore, according to her latest location on Tuesday evening.

Since Saturday, the female sub-adult white shark named Andromache had been had been tracked miles off the South Jersey coast, as far south as Avalon and as far north as Surf City, by researchers with the nonprofit oceanic research organization Ocearch.

After pinging researchers at 11:30 a.m. Monday, the 10-foot, 8 inch-long shark veered sharply east and looks to be headed deeper in to the Atlantic Ocean – at least for the time being – according to data from its tracker collected at 6:28 p.m. on Tuesday.

Adromache has traveled 155 miles in the last 72 hours.

A ping occurs when a global positioning tag on a shark's dorsal fin breaks the surface of the water for long enough time to be detected by Ocearch's positioning satellites. The organization has been tagging sharks since 2007.

Andromache was first tagged swimming off the coast of Cape Cod in August,  and since then that has been the furthest north that the great white shark has traveled.

In total, Andromache has traveled over 5,000 miles along the U.S. eastern seaboard in the last 165 days. Her first appearance off the New Jersey coast came in October when she pinged in the water off of Island Beach State Park.

She saw as far south the coast of Cape Canaveral in Florida in November before making her way back north during the last six months.

Based on her size, researchers believe Andromache is fully grown, yet. Adult great white sharks are typically 15 feet long and weigh up to 5,000 pounds.

Her name comes from the mythological Greek character Andromache, who is described as a symbol of maternity, strength and courage.

A sub-adult female great white shark named Miss May pinged while swimming off the coast from Atlantic City last summer. The 10-foot-long, 200-pound shark has been tracked by Ocearch since February 2019 after she was first spotted off Florida's eastern coast. Her latest ping was recorded this past Saturday off Ponte Vedra Beach.

Miss May has traveled up and down the Eastern seaboard over the last two years, going as far north as Cape Cod and as far south as West Palm Beach. She spent two summers ago swimming off the coast of Cape May County.

According the Florida Museum of Natural History, which keeps statistics on shark attacks, 57 people were attacked by sharks worldwide in 2020 and 33 of those instances occurred in waters off the United States. Three of the U.S. attacks were fatal and there were no shark attacks in New Jersey waters.

That goes to say that sharks and people generally coexist without incident. Earlier this month, the Los Angeles Times reported that people and sharks probably come in close proximity to one another significantly more often than we realize, too. The article interviews photographer Carlos Guana who has used a drone to video multiple instances of swimmers and surfers unknowingly floating on the surface of the Pacific Ocean off of Santa Barbara County while great white sharks lurked below.

"These types of encounters have always been happening," Guana told the L.A. Times. "Which shows you really just how low the number of attacks are."