And just in time for the Fourth of July weekend 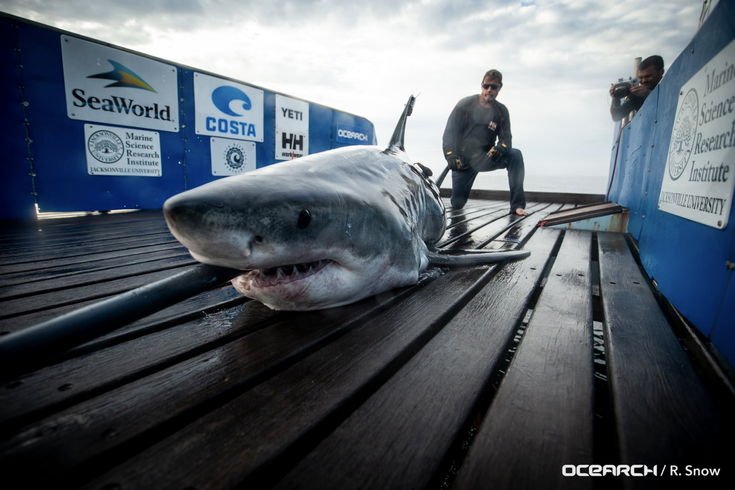 This white shark named Miss May by researchers has been tracked swimming off the coast of Cape May County this week. On Tuesday, it was near Cape May and by Wednesday had moved north near Sea Isle City and Ocean City. The photo above shows Miss May being fitted with her tracking device in February.

A 10-foot, 800-pound white shark was pinged by researchers off the coast of Ocean City on Wednesday morning, and just in time for all of the Fourth of July beachgoers.

The shark, named Miss May by researchers with the nonprofit OCEARCH, who first tagged her in February, has been making her way north from Fernandina Beach, Florida for months.

Researchers noticed five different pings from the shark 10 miles off the coast of the Jersey Shore near Cape May on Tuesday. The first sighting was after 11 a.m. outside the Delaware Bay in Ocean County, according to OCEARCH.

On Wednesday at 6:58 a.m. she appeared to still be heading north — right between Sea Isle and Ocean City.

Since first being tagged in February, Miss May has traveled more than 2,740 miles. Last week, she appeared off the coast of North Carolina.

Steadily making my way northward! Keep an eye out for me if you’re nearby, and keep following me to see where I end up! https://t.co/R8ZBYQnaYU