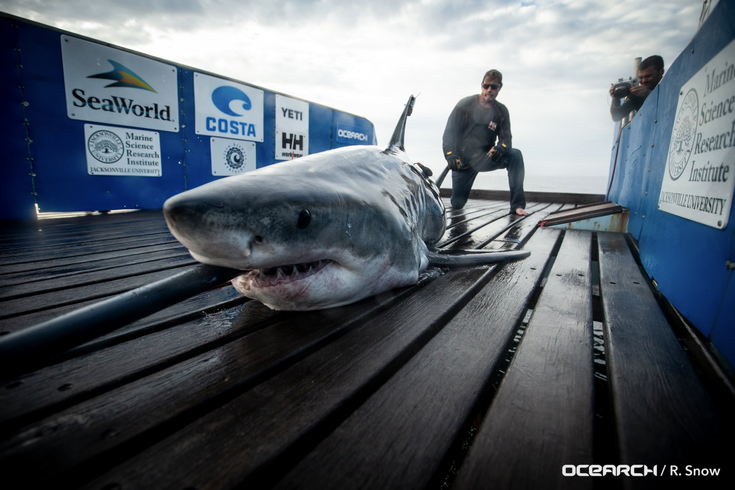 'Miss May' a great white shark being tracked by the nonprofit organization Ocearch, was swimming off the New Jersey coast Tuesday morning.

A great white shark with a dedicated Twitter following was swimming off the Atlantic City coast on Tuesday morning.

The shark, a female named "Miss May," is being tracked by Ocearch, a nonprofit organization that collects data about sharks and other ocean animals. Ocearch placed a tracker on Miss May in February 2019 after spotting her off the Florida coast.

Since then, the shark has traveled up and down the eastern seaboard, venturing as far south as West Palm Beach, Florida and as far north as Cape Cod, Massachusetts. Last summer, she spent the Fourth of July weekend swimming off the coast of Cape May County.

Ocearch created a Twitter account for Miss May after the shark was caught and tagged last year. The account, used to update her whereabouts, now has nearly 8,000 followers.

Miss May is a sub-adult shark, meaning she is not yet fully grown. She was 10-feet-long when measured by scientists last year. Adult great white sharks are typically 15-feet-long and weigh up to 5,000 pounds.

Ocearch announced her return to the Jersey Shore in a tweet, but noted Miss May was swimming well offshore. Last summer, she continued swimming north before migrating south in the fall.

The migration patterns of female great white sharks, like Miss May, are difficult to predict until a few years of tracking data have passed, according to Ocearch scientists.

Today @MissMay_Shark is visiting some of @MaryLeeShark’s favorite stomping grounds. She is off the coast of Atlantic City, New Jersey. pic.twitter.com/kilOjz23mO

On Monday, a New York City woman was killed by a great white shark in Maine while swimming about 20 yards off the shore of Bailey Island. The death of Julie Dimperio Holowach, 63, marked the state's first fatal shark attack.

A bull shark was spotted off the coast of Hempstead, New York on Monday by a lifeguard on a surfboard. It was one of three shark sightings that prompted beach closures on Long Island.