The Philly skyscraper was the first to tower over City Hall 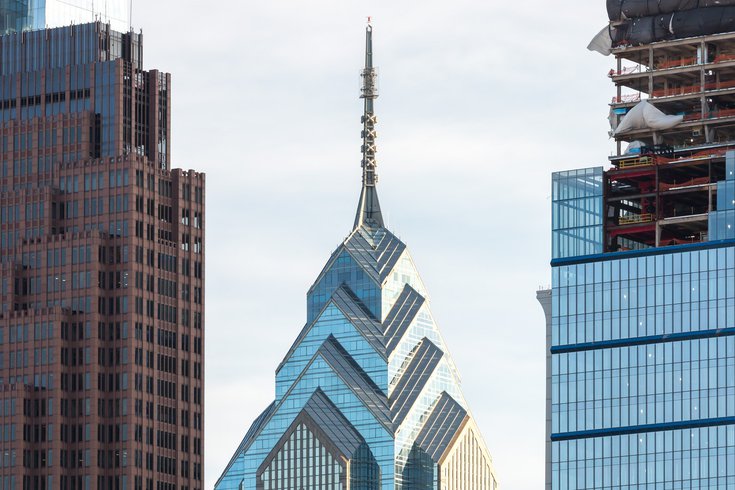 Helmut Jahn's One Liberty Place was the first Philly skyscraper to rise above William Penn's statue atop City Hall.

Helmut Jahn, the German-American architect credited with modernizing Philadelphia's skyline, was killed while riding his bicycle Saturday afternoon in a Chicago suburb. He was 81.

Jahn was struck by a pair of cars at a T-shaped intersection in Campton Hills, an Illinois town located about an hour west of Chicago, according to the Chicago Tribune. Witnesses told police that Jahn failed to stop at a stop sign. He was pronounced dead at the scene.

Jahn designed Liberty Place, a pair of skyscrapers that prompted a contentious public debate about the city's identity when they were first proposed in April 1984.

The 945-foot One Liberty Place became the first skyscraper to rise above William Penn's statue atop City Hall. As a result of a gentlemen's agreement, the 548-foot tower had remained the highest point in Philadelphia since it was constructed in 1901.

For decades, the tower was blamed for the city's professional sports woes. It was only after a William Penn figurine was placed atop the Comcast Center that the Phillies won the World Series in 2008, breaking the so-called "Curse of Billy Penn."

The building's development was met with staunch opposition from famed city planner Edmund Bacon and others who argued it would destroy the city's downtown atmosphere.

However, former Mayor Wilson Goode helped drum up support among City Council, the Planning Commission and residents. The tower was completed in 1987.

Rouse and Associates, the skyscrapers' developer, selected Jahn through an architectural contest. He was told that the building "better be done good," and he understood just how important the project was to the city.

"When a building replaces a public building ... it has a responsibility to have a content, to have an expression which justifies that it is so tall," Jahn told PhillyVoice in 2017. "So many buildings do that — the Washington Monument, the Eiffel Tower in Paris. Just built for an exhibition — now, it's the most memorable thing you identify with in Paris."

Jahn used the Chrysler Building in New York City as his influence for One Liberty Place. He implemented similar setbacks into the top, mimicked the shapes along its core and cast his building in reflective blue glass and granite.

"Buildings aren't just monuments," Jahn said. "They have to be functional. This is something we're very keen about — if it works first and if it's constructed the right way."

The construction of Liberty Place accelerated the development of several other skyscrapers that rose above City Hall, including the BNY Mellon Center, Three Logan Square and G. Fred DiBona Jr. Building.

"It's not how new and how interesting a building is when it's finished and it gets a lot of attention," Jahn said. "It's what you think of a building after the test of time. ... The good buildings get better in time. The bad buildings you forget."

Jahn is best known for being at the forefront of the postmodern movement in Chicago. His most notable work there includes the James R. Thompson Center and the United Airlines Terminal at O'Hare International Airport. He also designed buildings in Germany and Bangkok.

He was born near Nuremberg, Germany in 1940 and emigrated to the United States in 1966 to study at the Illinois Institute of Technology in Chicago.

Jahn is survived by his wife Deborah and son Evan, according to his obituary.