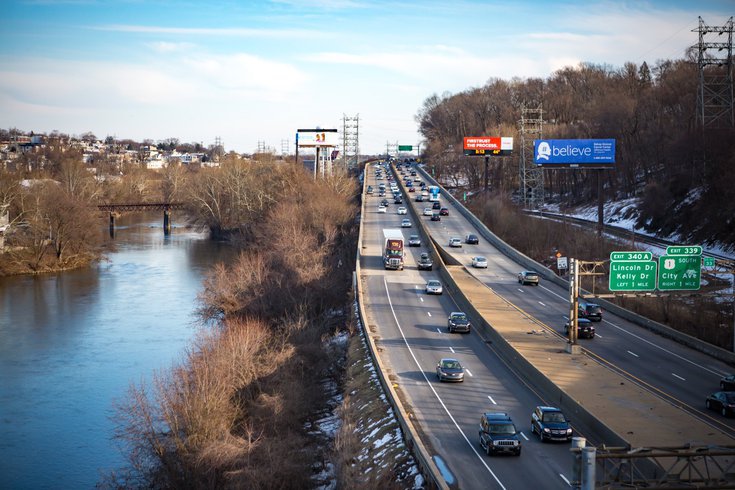 Speed limits on the 14-mile stretch of the Schuylkill Expressway between Philadelphia and King of Prussia will vary between 35 mph and 55 mph based on real-time traffic patterns. The speed limits posted on 72 electronic signs are now enforceable, PennDOT said.

After a monthlong testing phase, PennDOT's variable speed limit and queue detection warning systems are now in full effect on the Schuylkill Expressway from Philadelphia to King of Prussia.

Motorists along this 14-mile stretch of Interstate 76 will see electronic signs with changing speed limits that are determined based on real-time travel conditions. They indicate that congestion is ahead and speeds should be adjusted to harmonize traffic flow.

All existing static speed limit signs have been removed from the corridor, PennDOT officials said. The 72 electronic signs installed last month will now show speed limits varying between 35 mph and 55 mph, with a maximum of 50 mph in Philadelphia.

The range of speed limits may be slightly adjusted after the performance of the system and traffic progression results have been collected and analyzed.

Speed limits posted on the electronic signs serve as enforceable, regulatory speed limits and are not recommended speed advisories.

New roadside signs also will include a real-time display of electronic warning messages, including alerts about upcoming slowdowns, lane closures or other adverse conditions.

The stretch impacted by the new VSL system serves more than 130,000 vehicles each day and is notorious for its traffic jams. PennDOT invested in the technology upgrades after analyzing traffic and crash patterns over the past several years, finding that about two-thirds of the accidents along this corridor were rear-end crashes. The agency cites statistics suggesting that VSL systems can reduce crashes by up to 30%.

In the United States, VSL systems were first introduced in 1960 along the Lodge Freeway in Michigan. Their use in the U.S. has expanded to locations in at least 15 states. They have been more widely deployed in Europe, with successful results reported in the United Kingdom, Germany and Denmark.

PennDOT says its VSL and queue detection warning systems are the first phase of a long-range, multimodal transportation management plan to improve travel and safety on I-76 between Philadelphia and King of Prussia.

Later phases will include modernization of traffic signal systems along roadways near the expressway and changing some shoulders to accommodate an additional travel lane during peak times.