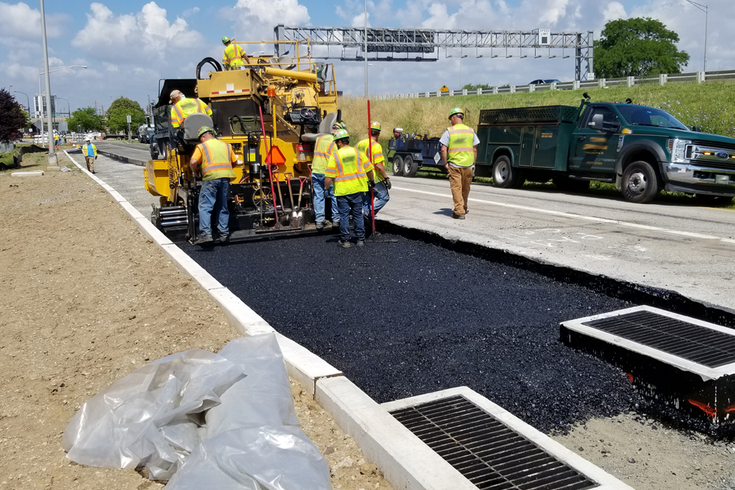 The Delaware River Port Authority began an improvement project on a two-mile stretch of I-76 near the Walt Whitman Bridge last year.

Motorists who travel to and from the city using the Walt Whitman Bridge will encounter significant changes to the traffic patterns on the Schuylkill Expressway for the next few months.

Construction on the eastbound and westbound sides of I-76 through South Philly are reduced to one lane in each direction beginning Monday. The lane restrictions occurs as the Delaware River Port Authority begins the next phase of its I-76 construction project.

The roadwork impacts the Schuylkill Expressway mostly between Broad Street and Passyunk Avenue, according to the DRPA. Construction is expected to be completed by the end of August. The project includes drainage improvements, concrete repairs to overpasses, milling and paving. The following ramps also are closed to allow for roadwork, beginning Monday:

Starting May 25, the following ramps will be closed:

Detours will be in place to guide drivers. Motorists are advised to allow for additional travel time and to proceed with caution and appropriate speed through the construction zone.

A new construction phase and traffic pattern with one travel lane in each direction on I-76 between Broad St. (Exit 349) and Passyunk Ave. (Exit 347) begin TODAY, 5/10.

The $74 million highway construction project began last year and is expected to be completed in 2023. It includes repairs to about two miles of the expressway between the Walt Whitman Bridge toll plaza and Passyunk Avenue in South Philly.

Among the improvements being done as part of the entire project are pavement reconstruction and curb replacement, the addition of new drainage inlets, the replacement of concrete roadway on the overpasses, shoulder grading, pedestrian tunnel repairs and the installation of new sign structures, light poles, electrical and fiber optic lines.

The DRPA's roadwork follows last year's PennDOT project a little further west on Schuylkill Expressway, between the 30th Street and University Avenue exits. As part of that project, PennDOT reconstructed the median barrier and overhead viaduct on the interstate.