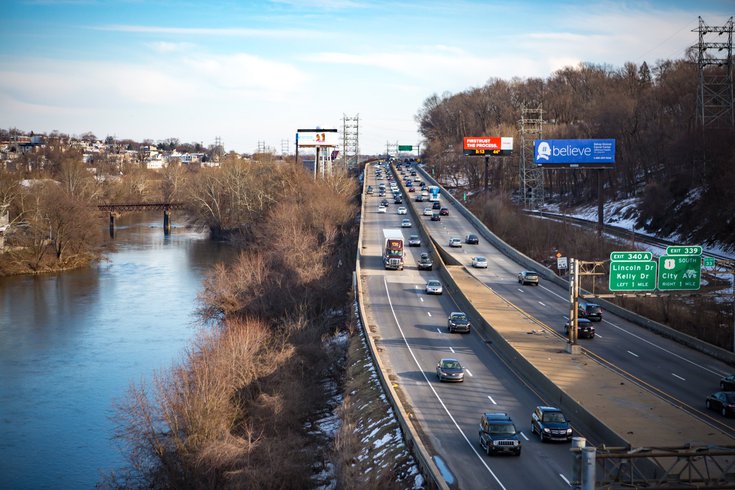 Variable speed limit signs installed along a 14-mile stretch of the Schuylkill Expressway, from Philadelphia to King of Prussia, will become enforceable on May 10, 2021.

Drivers on the Schuylkill Expressway soon will be expected to comply with a new variable speed limit system implemented by PennDOT to improve congestion and safety along the corridor.

The 14-mile span between Philadelphia and King of Prussia is one of the busiest highway stretches in the region, serving more than 130,000 vehicles each day. But PennDOT officials believe the new installations will relieve some of its notorious traffic jams.

PennDOT activated 72 variable speed limit signs and a queue detection and warning system along the expressway earlier this week. The technology runs along the eastbound and westbound lanes of I-76 from the Pennsylvania Turnpike in Montgomery County to the U.S. 1 North interchange in Philadelphia.

The system is in a testing phase that will continue through Monday, May 10. During that time, the speed limits will remain static as drivers adjust to the new signs.

For now, drivers can expect to see a fixed speed limit posted on VSL signs matching the speed limits posted on existing static speed limit signs. They are set at 55 mph in Montgomery County and 50 mph in Philadelphia.

New roadside signs also will include real-time display of electronic warning messages, including alerts about upcoming slowdowns, lane closures or other adverse conditions.

On May 10, the existing static speed limit signs will be removed and posted speed limits will begin to change along the corridor using an automated system.

Initially, the VSL signs will vary between 35 mph and 55 mph based on real-time traffic and safety conditions, with a maximum speed of 50 mph in Philadelphia. That range may be slightly adjusted after initial system performance and traffic progression metrics are collected and analyzed.

Drivers will need to adhere to the variable limits, at the risk of getting ticketed.

"Speed limits posted to the new VSL signs on I-76 will serve as enforceable, regulatory speed limits, not recommended speed advisories," Pennsylvania State Police Captain Robert Krol said. "All motorists should follow the posted speed limit on the VSLs."

The goal of the system is to alert motorists to congestion ahead and improve traffic flow, reducing stop-and-go conditions and rear-end crashes.

VSL systems were first introduced in 1960 along the Lodge Freeway in Michigan. Their use in the U.S. has expanded to locations in at least 15 states. They have been more widely deployed in Europe, with successful results reported in the United Kingdom, Germany and Denmark.

PennDOT cites statistics showing that VSL systems can reduce crashes by up to 30% despite their counterintuitive function of reducing speeds. Their purpose is to harmonize speeds, which depends on public acceptance and high compliance rates. In some programs, they are deployed primarily in bad weather conditions or in active work zones when traffic and crash risk are at their worst.

Notably, PennDOT's VSL on I-76 will be enforceable with tickets. Many other VSL systems are deployed as advisories but do not have speed enforcement.

Critics of VSLs say the systems are confusing for drivers and can be perceived as speed traps if their touted benefits don't come to fruition, Pew reported in 2018. Communication of the program — especially if it's enforceable — is paramount to the success of VSL systems.

In Missouri, a pilot VSL program launched in 2008 along 35 miles of highway near St. Louis was ditched after just five years. The speed limits were enforceable at first, but police officers found them difficult to gauge because they often were parked away from the variable signs.

A state-commissioned study in 2010 determined that the VSL system modestly cut down on crashes, but it didn't improve congestion. The speed limits were made advisory in 2011 and the program was abandoned in 2013 amid findings of widespread dissatisfaction among both drivers and law enforcement.

PennDOT says its VSL queue detection and warning system are the first phase of a long-range, multimodal transportation management plan to improve travel and safety on I-76 between Philadelphia and King of Prussia.

Later phases will include modernization of traffic signal systems along roadways near the expressway and changing some shoulders to accommodate an additional travel lane during peak times.

PennDOT Secretary Yassmin Gramian, who celebrated the VSL system deployment in Conshohocken on Thursday, said she believes variable speed limits will be positive for the Schuylkill Expressway.

"These devices will help reduce congestion and greatly improve safety by warning drivers of changing conditions based on real-time expressway, traffic and weather events," Gramian said. "This is one of the ways we are using operational strategies and technologies to actively manage travel and traffic flow along this critical corridor."