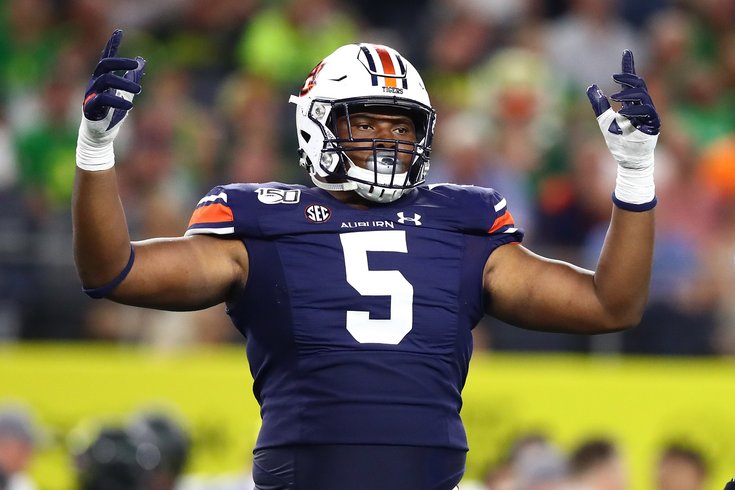 After having some nice depth at DT for like five minutes this year, the Eagles will once again probably need help there next offseason.

Biadasz is a very strong, nasty, intelligent center who is highly likely to go in the first round of the 2020 draft, assuming he comes out. He's not going to get out in space and make athletic plays the same way that Jason Kelce does, but watch him move the line of scrimmage and put guys on the ground:

Going back to 2000, only 13 centers have been picked in the first round, although the league has started to trend towards drafting more of them early in recent years, as three centers went Round 1 in the last two drafts, and five got taken in Round 1 in the last five drafts:

The highest a center has gone over the last 20 drafts is 15th overall, when the Dolphins took Mike Pouncey there in 2011. Taking centers in the first round is a pretty safe bet, in that you're likely to find a long-term starter, and as you can see, there was a string of six straight first-round centers who went to at least one Pro Bowl, for whatever that's worth.

However, is the positional value there? As in, is a center going to make enough of an impact to significantly raise your number of wins over the course of their tenure with the team? That's something for the Eagles' analytics nerds to study.

The Eagles have a need for a center on the horizon, but ideally one with positional versatility. Biadasz has only played center at Wisconsin, but there's little reason to believe he couldn't also play guard. He could make sense as a versatile backup iOL early in his career, and eventually a full-time replacement for Kelce at center.

Every year we profile a bunch of Alabama players, and the Eagles never draft any, ha. Welp, that'll continue this year, I guess.

Carter has mostly played slot corner so far at Bama, but he made a move to safety in 2019. He can play free safety, strong safety, slot corner, or the star position in Alabama's defense, and is widely thought of as one of the smartest players on the team. That makes him a Malcolm Jenkins replacement candidate. A highlight reel:

The play at the 1:17 mark is awesome, in which he slips under the block of a guy who outweighs him 120 pounds, and then he gets a helmet on the football, creating a forced fumble.

Brown is a very large man at 6-foot-5, 318, pounds but he also possesses impressive quickness/athleticism, as well as a a motor that runs hot and an ill-tempered mentality. Watch him:

Personally, I was surprised he didn't come out in the 2019 NFL Draft, as he almost certainly would have been a first-round pick, barring any unknown character concerns. Brown is unlikely to be available whenever the Eagles are drafting in 2020, but it's worth at least learning his name, as surely they would have interest in him as a gap-penetrating wrecking ball of a DT.

Wallace is a deep ball-tracking stud who had big-time numbers as a sophomore, and is off to a great start as a junior

Not to start thinking about replacing DeSean Jackson before you've even had a chance to enjoy him, but Jackson will turn 33 in December. The Eagles' offense just looks so much different when they have a player capable of taking the top off the defense, and they'd be smart to start developing Jackson's successor.

Kindley gets good push in the run game, though if you get him in space, he'll struggle with speed. Here's his game against Alabama last season. He's No. 66, the LG.

There was hope that Isaac Seumalo could have something of a breakout season in 2019, but after his atrocious Week 2 performance against Atlanta, the Eagles need to start thinking about whether they can continue to trust him as a starter.