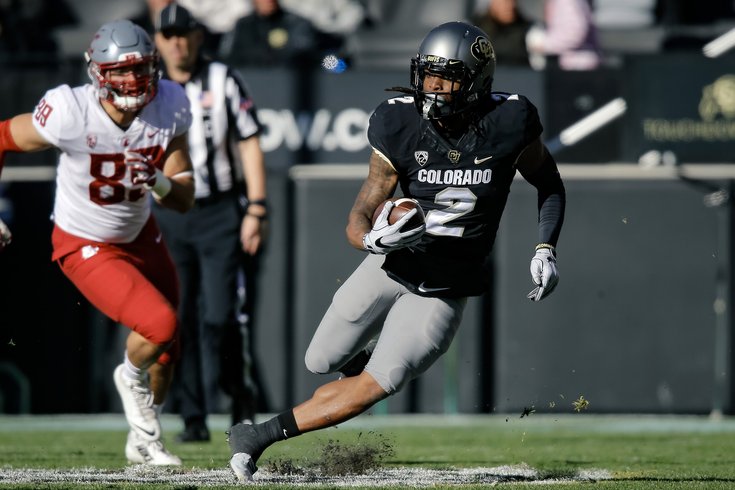 At 6'4, 242, Stanley fits the physical profile of quarterbacks the Eagles prefer.

He is a traditional inside-the-pocket quarterback with a big arm. Note the nearly 60-yard throw while moving to left at the 0:21 mark below:

The downside is his 57.7 percent career completion percentage (woof), and his 10 INTs in 2018. In my view, he has the upside to go on Day 1 of the draft with an outstanding season or on Day 2 with a really good one. In that event, he'll be out of reach for the Eagles, presumably. If he keeps chugging along as a talented quarterback who doesn't reach his full potential because his mental side of the game could use refining, he could had on Day 3, where I believe he'd be worthy of a pick as a developmental quarterback.

The Eagles could be in the market for another developmental quarterback in the draft after the failed Clayton Thorson experiment..

Shenault drew high praise from NFL Network's Daniel Jeremiah, who called Shenault a mix of Mike Williams and JuJu Smith-Schuster. Watch the six clips of him below:

As Jeremiah notes in the caption above, he attacks defenders after the catch, which is obviously a great trait in a league in which so many corners are crappy tacklers. The idea of running RPO's with Shenault on the field has to be intriguing to the Eagles. More highlights:

In an absolutely loaded wide receiver class, maybe Shenault falls to area of the first round where the Eagles could snatch him up, but I doubt it. But certainly, he's a name you should know heading into this college football season.

While Shenault above is more of a pipe dream for a team like the Eagles, Spielman is a player who could be available late Day 2 / early Day 3.

Spielman's numbers in his first two years at Nebraska:

He also has kick and punt return TDs to his credit.

With Nelson Agholor likely moving on in free agency in 2020, the Eagles could use a some slot receiver help, and they still have a need for returners.

If you happen to be watching Bama beating poor New Mexico State by 70 for some reason, one guy to keep an eye on for NMSU is Huntley, a smaller back at 5'9, 188, who has made a mark both as a receiver out of the backfield and as a kick returner. He should get plenty of kick return opportunities today.

In three years with the Aggies, Huntley hasn't done much as runner, as he only had 220 career carries for 1107 yards (5.0 YPC) and 9 TDs. However, as a receiver, he is weapon out of the backfield, as he had 94 career receptions, with 47 catches for 529 yards and 3 TDs in 2018. He also has five career kick return touchdowns and a kick return average of 27.7 yards. Oddly, he didn't have any punt return attempts his first three seasons, which is curious considering his impressive acceleration, start-stop traits, and ability to catch the football. Let him return punts, New Mexico State coaching staff.

The Eagles could use help at both return positions, and it wouldn't hurt to add a back with some receiving ability. Huntley could provide both, and should be available late on Day 3.

Davis is a highly athletic safety who landed at No. 32 in Bruce Feldman's 2019 college football Freaks List (via The Athletic):

The hard-hitting 6-1, 200-pound DB has been able to pack on 15 pounds after he didn’t run track this off-season after exhausting his eligibility in that spot. Davis was a first-team All-American hurdler who won the Pac-12 110 title by clocking a 13.50 and also took third in the 60m hurdles at the 2018 NCAA Indoor Championship with a time of 7.63. The former walk-on has never run a 40 but is expected to run in the 4.3s when he does.

With Malcolm Jenkins entering his 11th season and Rodney McLeod set to become a free agent after the 2019 season, the Eagles have an obvious need at safety. Davis would likely play the McLeod centerfield role, where he could use his impressive range to cover the deep sidelines.