Natalie Egenolf: We are all the Eagles naked offensive line 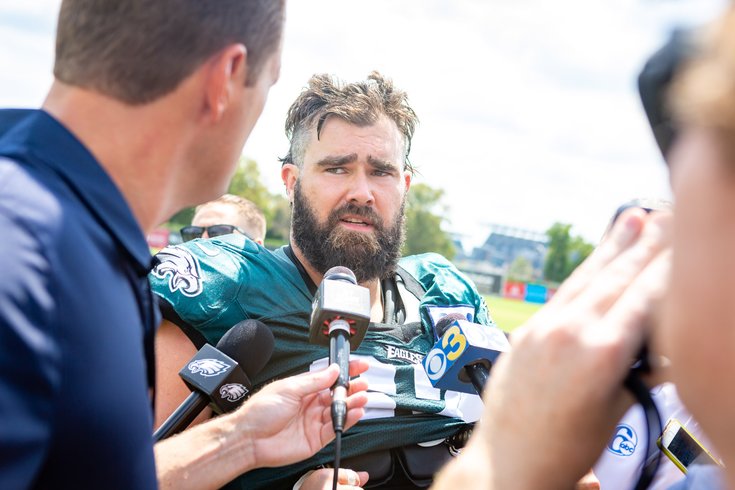 The time has finally arrived.

Another regular season is FINALLY upon us — another chance to race toward ultimate glory. If there was any NFL team that was going to do a naked photoshoot and bare it all for ESPN’s the Body Issue to usher in the 2019 football season, it’s the Philadelphia Eagles.

The photos, while meant to display the statuesque physiques of the men tasked with protecting Philadelphia’s most treasured person since Will Smith, prompted a myriad of reactions. The headlines read “NUDE PHOTOS OF THE EAGLES OFFENSIVE LINE RELEASED”. There were jokes, there were jeers, there were tweets, and there were people on the internet declaring “we never asked to see big naked men so in your face!”

I took one look at the photos and thought, “HA! PERFECT, THAT’S SO US.”

While you may not look in the mirror and see a 6-foot-5 280 pound lineman, you should have recognized yourself as an Eagles fan in the photos of strategically placed bird masks at a tailgate.

What we all wanted in the ESPN Body Issue: The Eagles Offensive Line! pic.twitter.com/7oLmCi6KYD

The world had a lot of feelings about our O-line in @espn's Body Issue. @cj_wentz is no exception.#FlyEaglesFly

We begin every season like Jason Kelce holding a giant ‘O’ against a Winnebago: naked with the thoughts of the possibilities that lie for the season ahead and our fists in the air as we amp up to cheer on our guys week after week as they battle toward January.

One look at the schedule has most people predicting the Birds sitting at 12-4 by the end of the season. Minus a three-game road trip in the middle of the season the challenges presented seem incredibly surmountable.

We’re predicted to be shoo-in’s for the NFC Championship and for some, the Super Bowl. The expectations seem incredibly high considering we have not seen Carson Wentz in a game in over nine months. He did not take one snap during the preseason. If there’s anything we learned from the Bears vs. Packers kickoff game, it’s perhaps most of the critics were right and preseason does do the football body good.

I’m still of the belief that there was no reason to put Carson at any risk and the decision to sit him all preseason was solid. So while in a perfect world we’d have the preseason to fall back on and say “he looks to be in solid form,” we have some insight on the depth of our team and the faith in the resolve of Doug Pederson and Carson as they promised at their press conferences this week that this team is ready to win.

As I mentioned in my prediction for this week:

I don’t think there could be a better team to kick off the season against. Washington could possibly be considered at the “dumpster fire” phase of their rebuild. With Case Keenum at the helm and left tackle Trent Williams holding out for a new contract, there’s nothing other than a semi-strong defense that you can pinpoint to hinder the Eagles offense that is STACKED with weapons for the glorious return of our savior Carson Wentz. I think this could potentially be a massacre on Sunday to the delight of the home crowd.

So, if you have any jitters about this season or Sunday, take one look at the body issue photos and allow yourself to feel, to channel your inner Jason Kelce, Lane Johnson, Brandon Brooks, Isaac Seumalo or Halapoulivaati Vaitai — naked and fearless about what can happen this season. Be a bird flying high, it’s a new dawn, it's a new day, it's a new life…and I'm feeling good.

One more important word of advice: don’t get naked at your tailgate on Sunday, that’s illegal.