Natalie Egenolf: With no preseason prep, how much leeway should Wentz be given this season? 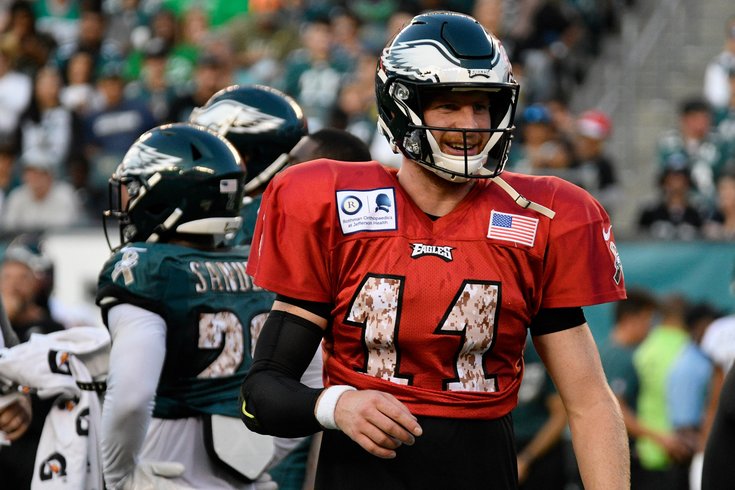 With all signs pointing to Doug Pederson putting Carson Wentz and the starters on ice for the entirety of the preseason, the question has risen, what if he’s rusty when the season starts?

The rust is to be expected. We haven’t seen Carson in any head-to-head NFL action since December of 2018 when he aggravated the stress fracture in his back. The closest he’s had to any sort of game action were the joint practices with the Ravens this past week — we all know that’s nothing in comparison to the real deal.

Carson’s first few seasons with the team allowed for leeway in regards to his performance. His rookie debut was in 2016 — was anyone really expecting that much from the new QB?

At the start of the 2017 season, the pressure was a bit higher. His stellar performance through the first part of the season had him in MVP contention before he went down against the Rams and Nick Foles took the reins. Again, the fanbase had tempered their expectations heading into that season because we had no idea what a Year 2 Wentz would look like.

Heading into 2018, the city was still in a Super Bowl malaise. I don’t think the fans even knew where to place Carson after Foles held the heart of the city in his hands.

Now, we’re heading into Wentz Year 4. He’s paid handsomely, technically has no restrictions health-wise, and is now at the helm with no Foles to fall back on. The expectations for this season are high, some declaring Super Bowl or bust, so what is fair to expect out of Carson?

On 97.5 The Fanatic this week the fanbase was debating how long to give Carson before criticism begins, assuming there's some rust after him sitting out the preseason. The host’s opinions at the station vary. Mike Missanelli believes regardless of the Eagles decisions in the preseason, as a starting QB in the NFL, Wentz is fair game for criticism in Week 1. Anthony Gargano gives the team a bit of a longer leash, noting the in the case the team starts 2-2, that doesn’t necessarily bode for the season going completely south.

A poll on the station Twitter page indicates the fans are settling for two weeks of slack:

How long are you giving Carson before he’s fair game for criticism?

I agree two weeks is fair for a QB who has not seen one snap of live action NFL football in nine months.

I am in no way giving the team leeway or excusing them if they lose those first two games against Washington (NO WAY!) or the Falcons (eh, tricky). However, since I’ve been a huge proponent of the risk vs. reward argument of sitting Carson and the starters in the preseason, especially after Sudfeld and Kessler went down, it’s only fair to allow for some leeway.

Reports from camp have Wentz playing within the constructs of the controlled environment on the field. It sounds like he will not be the same player we saw last year prior to injury, trying to extend the play on the field and potentially sacrifice his body. I’m of the belief that even though it will exist, we should not see the rust that Wentz will inevitably have.

The team should be prepared enough offensively to make up for any rust once we enter Week 1. Most importantly, being that he made the choice to sit Carson and the starters in the preseason, it’s on Doug Pederson to ensure that Carson’s rust is a non-issue and that we get the season off to a strong start with his guy in the drivers seat.