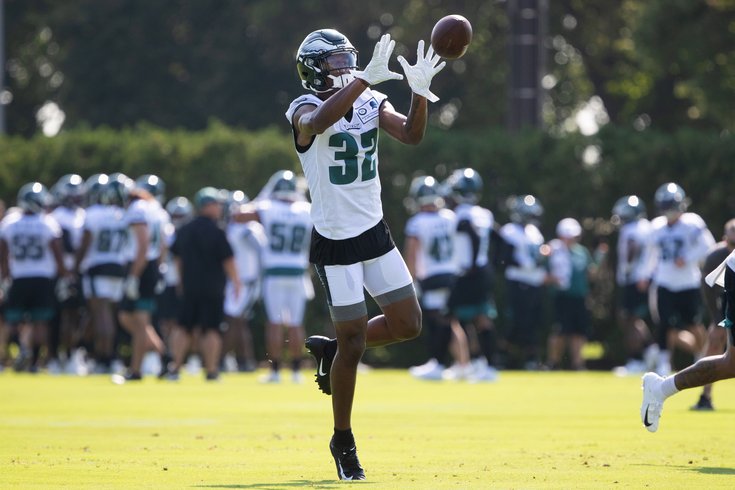 Rasul Douglas has earned a chance to start for the Eagles in 2019.

The Philadelphia Eagles wrapped up their 2019 training camp on Tuesday, or at least the portion of it that is open to the media, so now feels like an appropriate time to point out who helped themselves this summer, and who didn't.

• RB Miles Sanders: Sanders is easily the mostly explosive running back on the team, but as an added bonus, he has quelled concerns about his ability in pass protection and as a receiver out of the backfield. He should be the starting running back Week 1. I can't think of any reason why he won't be, other than that he's a rookie. In my view, who cares? In the last three years, four rookie running backs have finished in the top 2 in rushing yards. It's not exactly a difficult position to step into immediately and play well.

• WR Nelson Agholor: There were (rightfully) debates as to whether or not the Eagles should pay Agholor roughly $9.4 million on his fifth-year option this season, but now that he's here I believe he is going to be a significant part of the Eagles' offense, even with the utilization of more 2-TE sets. He had the most impressive set of catches among the Eagles' receivers this camp.

• OT Andre Dillard: Dillard's talent is obvious, and he would easily start at LT on more than just a handful of teams as a rookie had he been drafted elsewhere.

• LG Isaac Seumalo: For those of you who read practice reports from a number of different Eagles writers, can you recall anyone mentioning Seumalo being beaten? My guess is no. He quietly had a very strong camp, and I can say that the team feels very good about him heading into 2019.

• DT Timmy Jernigan: Anytime a 300-pound DT has back issues, teams become concerned about their long-term viability, and that's likely why Jernigan didn't get any love on the free agent market after the Eagles chose not to pick up a team option in 2019. Eventually they brought him back on a modest deal, and he looks a whole lot like the guy he was in the first half of 2017, when he was disruptive on the interior of the Eagles' defensive line.

• LB Kamu Grugier-Hill: Grugier-Hill was the early star of camp, and then he sprained his knee. I don't care. He showed enough before he went down that I believe he will still be a big part of the Eagles defense whenever he returns.

• CB Rasul Douglas: Douglas has gotten some opportunities in his first two seasons in the NFL, and has even started 12 games. In 2018, he struggled early, but really seemed to turn the corner at the end of the season. Douglas has been praised by coaches for the work he put in during the 2019 offseason, and he had by far the best camp of his career.

• CB Sidney Jones: Because he missed his first year with a ruptured Achilles and then had a disappointing second season in 2018, Jones entered camp with a bright spotlight on him, and not really in a good way. He managed to stay healthy all throughout camp, and provided sticky coverage, working both on the outside and in the slot. (I think he's best suited on the outside, personally.)

• CB Avonte Maddox: Maddox consistently continues to impress each day. He has a chance to become one of the better slot corners in the NFL, and maybe more.

• QB Nate Sudfeld: Personally, I like Sudfeld's game, but obviously the Eagles have concerns. Surely the team didn't give Josh McCown a nice contract just so that he could be a more suitable backup than Cody Kessler for two games. McCown will very likely be the No. 2, all season long.

• WR Mack Hollins: Hollins has been out-performed by Greg Ward and Marken Michel, at least in the regular offense, and has struggled to stay on the field. Even if Ward or Michel haven't leap-frogged him, Hollins is now the No. 5 receiver in 2019, at best. I don't think his roster spot is in danger, however, because he possesses more upside than Ward/Michel, and he has special teams ability.

• TE Richard Rodgers: Rodgers missed time with a foot injury, and then he went down with what looked like a serious injury in practice on Monday. He may be headed to IR soon.

• iOL Stefen Wisniewski: Wisniewski struggled mightily with his shotgun snaps all camp long, and was beaten fairly regularly even when he was playing at guard. I don't think his roster spot is safe.

• CB Jalen Mills: It appears as though Mills is going to start the season on the PUP list, and his starting job might not be there for him whenever he returns.