It's hard to find major weaknesses on the 2019 Eagles' roster 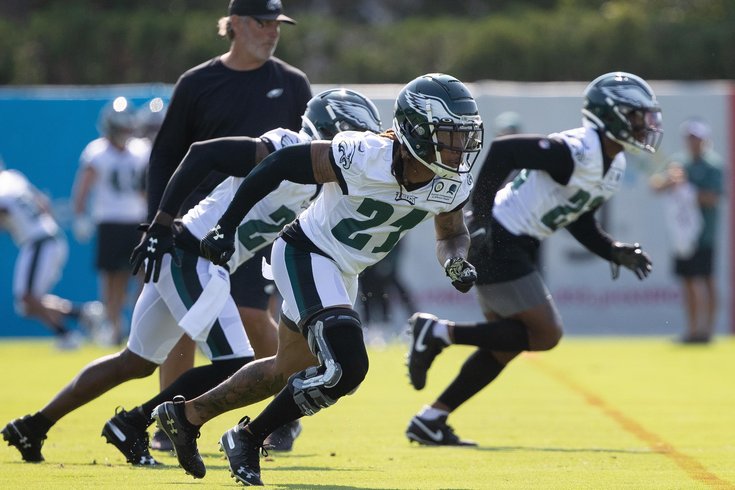 Like Carson Wentz, the Eagles' cornerbacks have to prove they can stay healthy in 2019.

When the Philadelphia Eagles kick off their 2019 season in two days, they will do so with what may very well be the strongest, deepest roster they've ever had in the salary cap era, at least on paper. The strengths are easy to see, particularly on the offensive side of the ball. The weaknesses, however, are far less obvious, at least in comparison to other teams around the league.

Before the start of the season, let's take one last look at the biggest perceived weaknesses on the team, and whether or not the level of concern is justified.

The Eagles have a good pair of starters at defensive end in Brandon Graham and Derek Barnett. Graham, of course, has always been known as a highly productive player in every metric except sacks, while the recently turned 23-year-old Barnett was having a legitimate breakout season a year ago before he got hurt.

While Graham and Barnett are not star players at the respective stages of their careers, I believe that most 4-3 teams would take Graham and Barnett over their own defensive end duos. A look around the league at the 4-3 starting DE duos, via Ourlads' depth charts:

How many of those duos would you take over Graham and Barnett? That's a subjective question, but personally, I'd take five, maybe six.

Of course, that's not what worries some observers. The concern lies with the Eagles' reserve defensive ends, who tend to see the field quite a bit, as Jim Schwartz likes to employ a heavy rotation along his defensive line. While Vinny Curry has made himself into a good run defender, he certainly has not been an explosive pass rusher over his career, save for the 2014 season, when he had nine sacks and four forced fumbles.

Otherwise, the rest Eagles' defensive ends are completely unproven, at least in regular season action. There's some reason for optimism after Daeshon Hall's dominance in a few preseason games, though Josh Sweat and Shereef Miller probably need an extra year of fine-tuning.

Can the combination of Curry and Hall/Sweat/Miller come close to replicating the production of Chris Long and Michael Bennett, who are no longer with the team? The short answer, on paper, is "hell no," but it's a more complicated question than it seems.

To begin, they may not have to. Barnett is, in theory, the player who would be picking up Bennett's slack, at least as it pertained to his 2018 production, as Bennett became a starter when Barnett went down. And while Long put up good pass rush numbers in his own right while playing in high-opportunity situations as a dedicated passing down specialist, the Eagles aren't exactly hurting for a front four in Graham, Barnett, Fletcher Cox, and Malik Jackson, that can get to the passer in those high-leverage situations.

If Graham or Barnett were to go down, it would indeed be a significant dropoff to the next guy up. Of course, that's true of most 4-3 teams around the league (go see for yourselves). I do believe, however, that the Eagles' loaded group of defensive tackles could help pick up the slack should the Eagles experience some missed time from Graham or Barnett.

The Eagles don't view the linebacker spot as an important position, at least in comparison to, say, quarterback, the O-line, D-line, corner, safety, wide receiver and tight end, ha.

As such, they don't dump a whole lot of resources into linebacker. It's not a priority position, and it is a typical area of concern heading into each season.

In 2019, the Eagles' top two linebackers are heading into the season with some injury concerns. Nigel Bradham had surgery on ligaments in his toe, and he missed the entirety of the preseason, and almost all of camp. He also went AWOL during the team's fourth preseason game, as a result of what Bradham described as nausea, per Jeff McLane of the Inquirer. Doug Pederson has said that he expects Bradham to be ready to go for Week 1.

Meanwhile, Kamu Grugier-Hill was having a fantastic camp before he got hurt. He is still recovering from a Grade 3 MCL sprain (which is essentially a tear), that will likely cause him to miss the first few games of the season.

Still, the Eagles are fine at linebacker, in my view. During the offseason, they signed Zach Brown, a player with 372 tackles over the last three seasons, as well as the versatile L.J. Fort, who looked spry in the preseason games. They rarely put three linebackers on the field these days, and even if they did, the Eagles have better depth at the position than is perceived.

Malcolm Jenkins remains a borderline top five safety in the league, while Rodney McLeod fits the defense well as a complement to Jenkins, when healthy. I imagine that opposing offenses will attempt to test McLeod when the Eagles are in single high looks to see how well he can cover sideline-to-sideline. To be determined how his knee will respond.

Beyond Jenkins and McLeod, while I'll maintain that Andrew Sendejo is not worth the 2020 fourth round pick he's costing the team by remaining on the roster, he is certainly a competent No. 3 safety.

Again, I believe the Eagles are fine here.

We'll specify "outside" corner, as Avonte Maddox looks like the real deal as an NFL slot corner. While not perfect, Maddox had an impressive season as a rookie playing three different positions, and playing them well. In 2019 training camp, he seemed to have built on his strong rookie campaign. It's perhaps a minor concern that his backup, Cre'Von LeBlanc, is on IR until at least Week 8.

At outside corner, the Eagles have youth and talent, but concerns remain:

• Jalen Mills: Still on PUP. He'll miss at least the first six weeks of the season.

• Ronald Darby: Darby is probably the Eagles' most explosive and talented outside corner, but is returning from a torn ACL. To be determined if he has the same speed when he returns to the field, as he is expected to do Week 1.

• Sidney Jones: Jones entered camp as a huge storyline, as he was coming off a disappointing, long-awaited 2018 season. As he continued to play well throughout training camp, he became less of a concern, and thus, less of a storyline. Jones has very good cover skills, but can he hold up physically over the course of a 16-game season?

• Rasul Douglas: Douglas was up and down in 2018, but he finished strong, and by all accounts, the Eagles were happy about the offseason he had. He'll be the first guy off the bench at outside corner, and will likely see playing time in relief of Darby even if there aren't any further injuries.

Fletcher Cox and Brandon Brooks both missed the entirety of the preseason, and just about all of camp.

Cox has been a full participant in practice this week leading up to the Week 1 game against Washington. He's good to go for Week 1. Brooks remains limited.

I'm less concerned about Cox missing as much as the offseason as he did than I would be with other players. Some players need training camp and the preseason to gear up for the regular season, but Cox has never been that way. In previous years, Cox hasn't exactly gone all out in camp, and when Week 1 came around, bang, he was awesome.

As for Brooks, one thing that he has working for him if he's a little sluggish out of the gate is that he has an elite player on each side of him in Jason Kelce at center and Lane Johnson at RT. It's not as if he's an outside corner left on an island, where he can easily be exposed.

Do we really need to rehash the concerns here? No, right?

Ultimately, once the season gets going, the injury talk will be forgotten, as long as Wentz doesn't get hurt. But as of September 6, his ability to start and finish 16 games is of significant concern.

Overall, while the health of the starting quarterback remains an issue until it isn't anymore, and the combination of health and inexperience at corner is somewhat alarming, the feeling here is that the rest of the concerns surrounding the Eagles' roster are very much of the nit-picky variety.