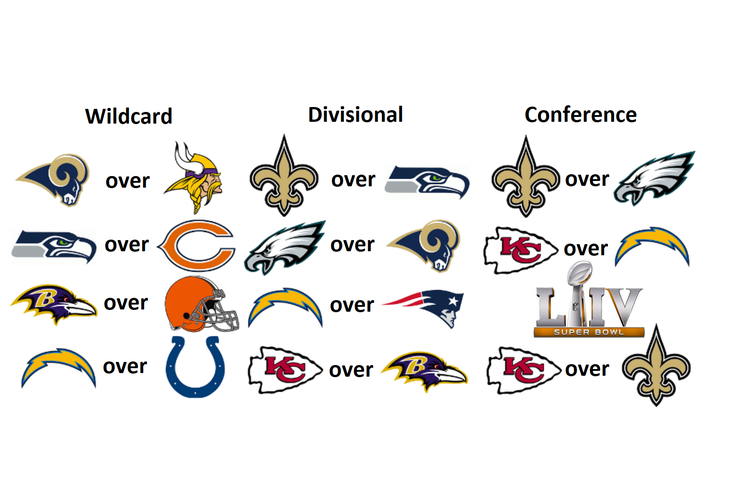 The Eagles will fall just short in New Orleans once again.

The start of the 2019 NFL season begins tonight, so it's time to lay out our predictions on who will be good, who will be bad, who will win the Super Bowl, and which individual players will shine.

• Saints: Their offense is reliably awesome every single year, and 2019 will be no different. I would call the Saints the safe pick for a deep playoff run.

• Eagles: Their injury luck (or lack thereof) has to turn around at some point, right? If/when it does, they'll be incredibly difficult to beat.

• Rams: While I expect the Rams to take a small step back on the basis that Todd Gurley might never again be the MVP candidate he once was, this is still a very talented roster.

• Bears: The Bears won't win 12 games again in 2019, but they're still good enough to win the overrated NFC North.

• Seahawks: I keep expecting them to fall off a cliff each year, and then they don't.

• Vikings: This last spot was between the Vikings and Cowboys. When analysts have a very positive view of the Cowboys, they usually falter, and vice versa. I don't think they're anything close to some sort of complete team that many others do, as noted here. Of course, if it comes down to Week 17, I fully expect Kirk Cousins to choke, again.

• Patri*ts: I mean, that division is just so bad. Plus, they cheat.

• Chiefs: I believe the Chiefs and Chargers have the two best rosters in the AFC, but they have tougher roads to the Super Bowl because they play in the same division, and thus hurt each others' chances substantially. I'm still putting one of them in though.

• Ravens: Baltimore went 6-1 with a point differential of +49 after Lamar Jackson took over last season. I got a chance to see their defense up close this summer, and was impressed.

• Colts: You know what? The AFC South is trash, and I'm sticking with Frank Reich. I mean, the winner of the AFC South is just going to lose meekly in the first round of the playoff to whichever of the Chiefs or Chargers doesn't win the AFC South, but the Colts will be a feel-good regular season story.

• Browns: Reluctantly, I have the Browns edging out the Steelers for the last wildcard berth. The Steelers have more experience winning games, but the Browns' talent has surpassed them.

Here's my pointless game-by-game look at the playoffs:

Aaaaaand who's going to be really bad:

• Dolphins: The tank is on.

• The Washington team: They're my bet to score the fewest points in the league this season.

• Bengals: The lone bad team in a good division.

• Raiders: So, uh, yeah, it's already falling apart in Oakland.

• Cardinals: They'll be interesting to watch, maybe, but the roster around Kyler Murray is old, and bad.

And finally, the individual awards:

• Carson Wentz, MVP: Wentz will be working with an elite offensive line, a talented set of receivers with varying skill sets, vastly improved running backs, and the best tight end duo in the league. Oh, and he's also pretty good, too. It's all there for Wentz to put up big numbers and do great things in 2019.

• Saquon Barkley, Offensive Player of the Year: He had over 2,000 yards from scrimmage behind one of the worst offensive lines in the NFL. He'll be even better behind a somewhat improved line.

• Aaron Donald, Defensive Player of the Year: 20.5 (!) sacks a season ago. It's hard to justify projecting anyone to be better than this guy.

• Kyler Murray, Offensive Rookie of the Year: He'll start from Day 1, and at a minimum, make plays with his legs.

• Ed Oliver, Defensive Rookie of the Year: You probably haven't heard much about Oliver since the lead-up to the draft, but my understanding is that he had a good camp.

• Coach of the Year (not pictured), Frank Reich, Colts: The Coach of the Year Award is usually mindless drivel, going to the coach of the team that had the biggest turnaround from one year to the next. In 2017, Doug Pederson was clearly a better coach than Sean McVay, but McVay took home those honors. Last season, I think Reich did more with less than Matt Nagy did with the Bears. This year, it won't be the biggest turnaround — it'll be the coach that weathered the loss of their most important player, and Reich will win a make-up award for getting shafted a year ago.