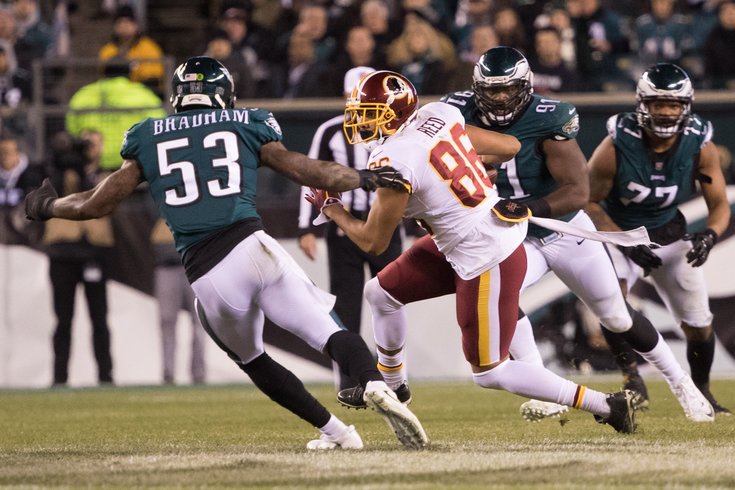 A season ago, the Philadelphia Eagles swept the injury-decimated Washington team by a combined score of 52-13, and they currently hold a four-game winning streak, with all four games being double-digit wins. This year, the Washington team heads into the season as one of the biggest long-shots in the NFL to win a Super Bowl.

The strength of Washington's team is probably the combination of their defensive front, along with their edge rushers. They've spent significant resources on bolstering the interior of their defensive line, spending a first-round pick (17th overall) in 2017 on Jonathan Allen, and another first-round pick (13th overall) in 2018 on DaRon Payne. Add in former Temple star Matt Ioannidis, who had 7.5 sacks last season, and Washington can create problems upfront for opposing interior offensive lines.

"The interior guys are all really solid," Jason Kelce said. They're two-gapping, big, strong guys who use their hands. They're smart. They anticipate plays. They understand leverage. They're all really good.

"It looks like Payne has gotten significantly better, not that he was bad last year, but he's just been pretty flashy in some of the preseason games. All three of them are really good, strong, athletic, big. Yeah, they're a challenge."

Despite playing a two-gapping style of defense up front that is typically not conducive to big pressure numbers, the trio of Allen, Payne, and Ioannidis combined for 20 sacks in 2018. Impressive.

Kelce is the best center in football, but there are potential question marks on each side of him. At LG, while the thinking here is that Isaac Seumalo is a quality starting guard, others don't feel that way just yet. At RG, while Doug Pederson believes Brandon Brooks will be ready for Sunday, it is to be determined whether Brooks can continue to play at a Pro Bowl level, or not. If Brooks can't go, it could get dicey on the interior with Halapoulivaati Vaitai getting his first ever exposure at guard.

In the last five years, how many players would you think have more sacks than Ryan Kerrigan?

Kerrigan is also second in forced fumbles over that span, with 15 of them. He is quietly building a Hall of Fame résumé.

"He just don't stop," Lane Johnson said of Kerrigan. "I talked to him at the Pro Bowl, and if I had to pick a player I'd like to have a career like, as far as someone who is pretty selfless, does everything the right way, even being on losing teams, he's been the bright spot of their organization. He's relentless, just a true professional, and a great player."

On the other side will be rookie first-round pick Montez Sweat, a long and lean athletic freak of nature who had good production in college, impressed at the Senior Bowl, and then absolutely destroyed the Combine.

"He's very fast," Johnson said. "He's got a good long-arm stab. He's dangerous too. There's not a lot of film on him, but coming out of Mississippi State, he's very fast, and very explosive off the ball, so he'll be another tough guy to go against."

3) The Eagles' pass rush vs. the left side of Washington's offensive line

The right side of Washington's offensive line has a pair of good players in RG Brandon Scherff and RT Morgan Moses, though it's worth noting that the Eagles have been able to do damage against them in the past. For example:

However, it's the left side of the line that could be a real troublesome area for Washington this season, with 36-year-old Donald Penn slated to start in place of Trent Williams at LT, and former Giants bust Ereck Flowers starting at LG.

RDE Derek Barnett and RDT Malik Jackson should be licking their chops.

4) The Eagles' two-TE sets vs. Washington's linebackers and safeties

One of the storylines of the Eagles' offseason was the likely implementation of increased two-TE sets, with Dallas Goedert emerging as a stud tight end alongside Zach Ertz.

This offseason, Washington released Zach Brown to dump his salary, and lost Reuben Foster for the season with a torn ACL. Their starting linebackers in 2019 will likely be Jon Bostic and Shaun Dion Hamilton.

With Washington employing a pair of shaky starting linebackers, it wouldn't be a surprise to see the Eagles come out with a game plan that heavily features two-TE sets. In two games against Washington a season ago, Goedert played 83 of a possible 146 snaps, or 57 percent. Against all other opponents, Goedert played 441 of 946 possible snaps, or 47 percent.

For some observers, the Eagles' secondary has much to prove heading into the regular season, after finishing as the 30th ranked pass defense a year ago, though obviously, they were decimated by injuries.

There are some hints as to what combination of Ronald Darby, Sidney Jones, Avonte Maddox, and Rasul Douglas will play at corner, but the expectation is that they'll all see the field. At safety, it's more straightforward, with Malcolm Jenkins returning for his sixth season with the team, and Rodney McLeod seemingly recovered from his torn ACL.

Against Washington, they may be facing the weakest passing attack on their schedule in 2019. Washington's top three receivers are, um, Paul Richardson, Terry McLaurin, and Trey Quinn? Yes? No? Well, whatever. 122 still-active players in the NFL in 2018 have/had more career receiving yards than the three of them combined.

McLaurin is a third-round rookie who didn't have much production in college, Richardson can't stay healthy, and while Trey Quinn showed a hint of promise as a rookie last season, he's a clear downgrade in the slot from Jamison Crowder, who left in free agency this offseason.

Oh, and I guess we should mention at some point that the guy throwing to that dreck will be Case Keenum.

The one proven target in Washington's offense is tight end Jordan Reed. However, during Washington's Week 3 preseason game against the Falcons, Reed took a cheap shot from safety Keanu Neal, resulting in Reed's seventh known concussion since 2011.

The #Redskins announce Jordan Reed is being evaluated for a concussion and will not return to the game. Reed took this helmet to helmet hit by Keanu Neal in the 2nd quarter #Redskins @nbcwashington pic.twitter.com/0mOo1QP6M4

Jay Gruden said last week that he thinks Reed will be ready for Week 1.

Jay Gruden says Redskins are “quite confident” that Jordan Reed will be fine but the coach likes the depth at tight end with JP Holtz.

Rub some dirt on it, Jordan.

Reed used to be an Eagle killer back in the Chip Kelly - Billy Davis days, but Jim Schwartz has done a far better job putting Reed on lockdown, typically matching up Malcolm Jenkins on him. In four games since Schwartz became the defensive coordinator, Reed has 18 catches for 131 yards and 2 TDs, or an average of 4 catches for 33 yards per game. The two TDs did not come against Jenkins. They both came in the same game in 2017, with Reed lined up out wide as a receiver in the red zone against cornerbacks. He beat Patrick Robinson and Jalen Mills in that game.

The other player on Washington's roster who has given the Eagles fits is passing down running back Chris Thompson, both as a runner and receiver:

Schwartz will have to have a plan for him.

This is a game that the Eagles must play well against the pass, and perhaps build some confidence for better NFL talent upcoming on their schedule.

UPDATE: Jordan Reed is out today, as is Adrian Peterson, apparently.

Jordan Reed and Adrian Peterson will be inactive for Redskins today. Some pretty serious hardware on the bench.