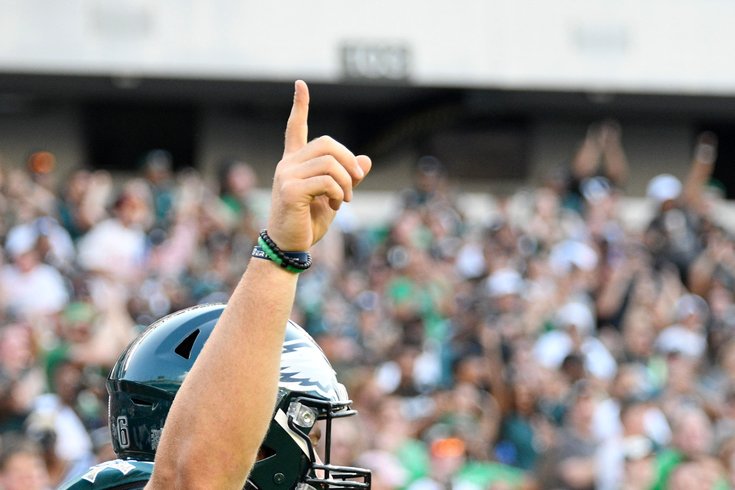 What is the line telling you: The NFC East features two playoff caliber teams in the Cowboys and Eagles, while the Redskins and Giants seem poised for down seasons. In a weak division, the Eagles should be able to reach a 4-2, maybe 5-1 division record. The Eagles only have four playoff teams from last year on their schedule, hosting all four at Lincoln Financial Field. They will travel to Dallas for their second division game. With a relatively easy division, and the fact that they will host all four playoff teams at home, there is no reason why the Eagles can’t win 10-plus games. A lot of people consider the Eagles the deepest team in the NFL, and assuming Carson Wentz stays healthy, this team should reach 10 wins.

As for the opener, oddsmakers offshore opened this line with the Eagles being a short 7-point favorite at home against a really bad Redskins team, with the combined total points set at 46. Since then, there's been sharp money attacking the screen on Philadelphia, which forced bookmakers to adjust their price a whopping three points.

As of right now, the current line has the Eagles minus-10 and some have this line as high as 10.5. Anytime a line has moved 3-3.5 points, the value on the move has been extracted, so it’s telling anyone to bet on the Eagles at minus-10/10.5, when the game opened 7 is never a good idea.

But if you can tie the Eagles in a 7-point, two-team teaser with the Baltimore Ravens, who play a down Miami Dolphins team, you should be able to cash a ticket. I personally bet Eagles -2.5/ Ravens at a PK on a teaser.

Defenses are always ahead of offenses early in the regular season and tend to gel faster. With the way this preseason played out, expect that to be the case again in 2019. With that said, the under 46 has also been kissed by sharp money, so if you want to throw a couple dollars on the total that's the sharp way to bet it.

Bottom line: We like the two-team, 7-point Eagles/Ravens teaser and the under-46 point total.

What is the line telling you: Oddsmakers offshore initially opened this line with the defending NFC Champion Rams as 3-point road favorites over Carolina with the combined total set at 51. We think the wrong team is favored here.

We love teams with a great pass rush and the Panthers defensive line, which ranked 11th in pressure rate in 2018, added Bruce Irvin along with Gerald McCoy from Tampa, who had 44.5 sacks and went to six-straight pro bowls before last year, not to mention drafting Brian Burns 16th overall and who is supposed to be a monster, so expect them to be even better.

This Carolina team is healthy this year compared to last, when they were the seventh most injured team in football, and that's going to make a huge difference in 2019 for Cam Newton and his crew. Newton, who is 40-to-1 to win the MVP, definitely has some value, as does the 25-to-1 odds on them to win the Super Bowl.

The Rams on the other hand will definitely regress in my opinion.

They lose Nadamokong Suh on their defensive line. Speedy, younger safety Lamarcus Joyner gets replaced by the 34-year-old Erick Weddle. They did pick up the veteran linebacker Clay Matthews, but his best years are behind him, and in the offensive trenches there's a bunch of uncertainty looming on the o-line. They're starting a new center, Brian Allen, and Joe Noteboom is their new left guard. Wide receiver Cooper Kupp is coming off a torn ACL, and Todd Gurley just didn't look the same in the playoffs.

The Rams were also a very fortunate team last year coming in fourth place in turnover differential at plus-11 and fourth in AGL, which means they were one of the least injured teams. Repeating this will be very difficult.

And the Super Bowl hangover curse might be lingering here. Those that don't know what that is: Since 2000, eight teams have failed to make the playoffs after losing the Super Bowl the previous year.

Bottom line: The Panthers plus-3 and a small bite on the plus-130 money line.

What is the line telling you: Books offshore and in Vegas opened up with Andy Reid’s Kansas City Chiefs as 4.5-point favorites over the Jags, with the combined total set at 52.5. Immediately, we saw some sharp money attack the screen on the home dog here.

The current line is painted KC minus 3.5 everywhere and, depending where you shop, you can actually lay 3.5 on even money, which means the books are inviting you to bet the Chiefs here and won't charge you any juice.

If you think the wiseguys are out of their minds betting against last year’s MVP Patrick Mahomes, then you’re actually better off buying the hook and dropping that line down to that key number of 3.

We love the Jags here in this spot at home to cover. They upgraded at quarterback with our beloved Nick Foles, and wide receiver Marquise Lee is back and healthy. Their offensive, which was banged up with injuries all of 2018, is finally healthy. They traded edge rusher Dante Fowler, but drafted defensive end Josh Allen from Kentucky with their fourth overall pick, which will only enhance that strong defensive line that came in fourth in the NFL in pressure rate.

This game is a coin flip. If you remember last year, Patrick Mahomes struggled against this Jags defense, throwing two interceptions, and was the only team he didn't throw a touchdown against while lighting up the rest of the NFL for 50 touchdowns.

Bottom line: We like the home team Jags plus-4 points. There's also some sharp money on the under 52.5.