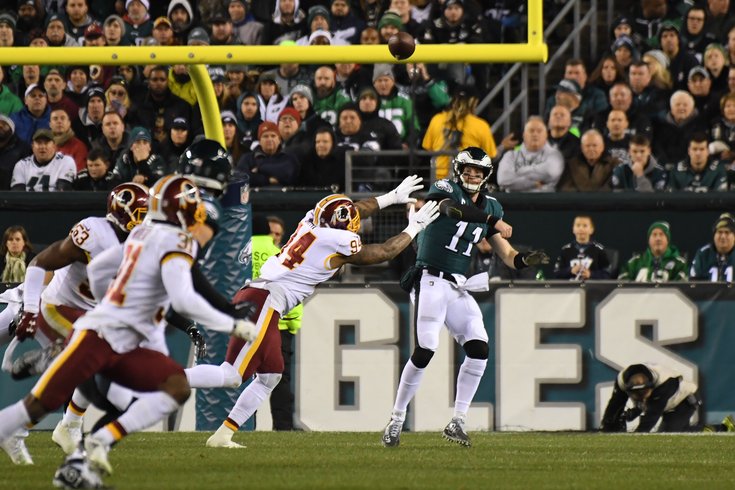 The Eagles are now 10-point favorites over Washington Week 1.

For the gambling degenerates, here are my Week 1 NFL picks. To note, the team logos indicate who I think will win the game, not cover the spread. At the end of the picks, I'll note a few teams that I like based on the spread.

Packers at Bears (-3.5): The NFL thought that this matchup would have mass appeal in its 100th season, on the premise that it is the league's oldest rivalry. Meh. I'm guessing a Bears or Packers fan came up with that idea. Anyway, it is an interesting matchup between a pair of NFC teams that are a little bit of a mystery.

The Packers went 6-9-1 a season ago, even with a healthy Aaron Rodgers, and while it's convenient to blame outgoing head coach Mike McCarthy, it's also probably valid. Meanwhile, the Bears enter the 2019 sans their stud defensive coordinator, Vic Fangio, who bolted to become Denver's head coach, and have spent the entire offseason unhealthily obsessing about a blocked field goal.

On the one hand, I believe in the new head coach bump. It's hard to prepare for a team in which you don't have a great idea what they're going to try to do. On the other hand, the Bears' roster is simply a lot better, and their only home losses last year came at the hands of the last two Super Bowl winners.

Rams (-2.5) at Panthers: The Rams got out of the gate fast a season ago, scoring at least 33 points in each of their first five games. I'm always wary of the west coast team playing a road game at 1:00 p.m. EST, but this Panthers offense, with a "maybe not 100 percent" Cam Newton, can't match the Rams' explosive offense on the scoreboard.

Titans at Browns (-5.5): The Browns will be a fascinating team to watch in 2019, as they have assembled quite a bit of talent, but also a lot of explosive personalities. While I'm not completely ready to buy in on their Super Bowl hopes just yet, they should get off to a good start in front of a geeked-up crowd against a boring team in the Titans.

Chiefs (-3.5) at Jaguars: I'll take Big Red's offensive firepower over BDN and the Jaguars. Personally, I fear that BDN may find Jacksonville to be a bad experience, playing behind a shaky offensive line and relatively weak skill position players.

I only have to give 3.5 points to take the Chiefs? Yes, please.

Ravens (-6.5) at Dolphins: This line was Ravens -3 at one point, but it rose to -6.5. I'm guessing that's because they have won their last three Week 1 games by a combined score of 80-10. Baltimore has won 16 straight (!) preseason games, which seems to work for them in terms of carrying over that momentum into Week 1.

Falcons at Vikings (-3.5): Kirk Cousins can beat mediocre teams, but he falls flat against the good ones. I believe the Falcons are the former this year.

Bills at Jets (-3): I actually think the Jets could be decent for an AFC East team (other than the Patri*ts) this year, and by that I mean, like, 8-8? I certainly like the chances of Sam Darnold making a big leap better than I like Josh Allen's.

Washington at Eagles (-10): While the Eagles' preseason was far from pretty, Doug Pederson and Jim Schwartz have proven that they will have the team ready to play Week 1, as the Eagles have started 1-0 in each of the last three years. They've also been successful against Washington, sweeping their division rival in each of the last two years:

That would be a combined score of 116-54 in favor of the Eagles in the last four matchups between these two teams. On Wednesday, we laid out our five matchups to watch, but it's probably just easier to say that the Eagles have one of the best rosters in football, and Washington has one of the worst.

Colts at Chargers (-6.5): The Chargers are the easy call here, but I have too much respect for Frank Reich's ability to get his players to play for him to lay 6.5 points.

Bengals at Seahawks (-9): The Bengals are in the "worst team in the NFL" conversation.

Lions (-3) at Cardinals: So, the Cardinals, with a new head coach in Kliff Kingsbury running an unknown offense with a dynamic rookie quarterback in Kyler Murray will be difficult to prepare for, right? While I may buy that to some degree in the case of the Packers above, I don't necessarily buy it here, but since they're playing Matt Patricia and the Lions, I'm in on a "bet the uncertain side" play for one week.

Giants at Cowboys (-7.5): The Cowboys won one game a season ago by more than one score, when they smoked the Jaguars by 33. Otherwise, all of their wins were by one score or less. They are built to play close games.

In this matchup against the Giants, Ezekiel Elliott will have to prove that he is in shape, after spending the summer in Cabo. The bigger concern for me if I'm Dallas, however, is that their best defensive player, DeMarcus Lawrence, probably isn't 100 percent.

The Giants were foolish the last two offseasons for adding a bunch of older, expensive offensive linemen, a short-term move on a team that should be looking long-term, but there's no question they'll be a lot better up front than they've been in recent years.

I love the Giants' chances of keeping this game close, and what the hell, let's just also go ahead and pick them to win this game outright. If you have the stomach for it, the Giants are an appealing moneyline bet.

Steelers at Patri*ts (-5.5): The Patri*ts are, of course, cheaters. Factually, they have been caught cheating on multiple occasions, and have been credibly accused (but not disciplined for) all sorts of other chicanery, like in 2015, when the Steelers' headsets didn't work at Gillette Stadium, but somehow the Patriots were still allowed to use theirs.

With a full offseason to think up new and exciting ways to cheat, the Patri*ts should be able to generate some kind of unfair advantage in this important AFC matchup.

Texans at Saints (-7): The Saints have lost each of their last five Week 1 matchups!

We'll pick them here, but be wary of picking them in your survivor pool.

Also, while I think the Texans made some awful front office decisions over the last week, I do still think they'll be a decent enough team on the field this season. I'll take the points.

Broncos at Raiders (pick 'em): I'll be asleep by the time this game is in the second quarter.

The Eagles Week 1 against this trash Washington team feel like a solid bet. As noted above, I wouldn't trust the Saints early in the season.