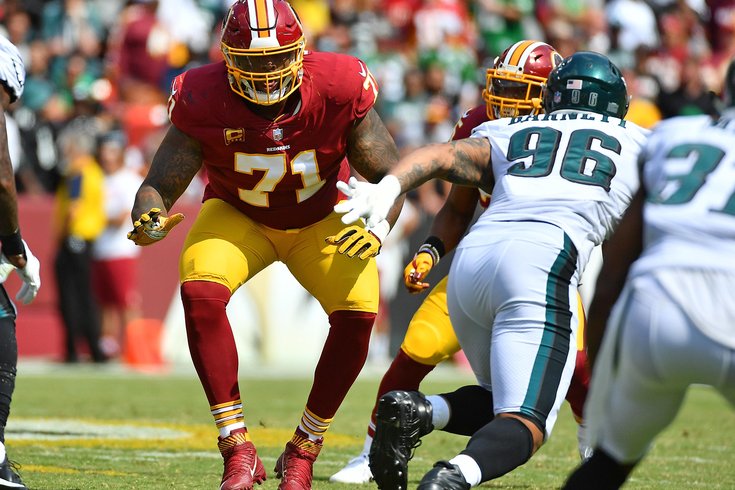 A season ago, the Philadelphia Eagles headed into Week 1 sans a number of their most important players, including quarterback Carson Wentz, No. 1 wide receiver Alshon Jeffery, starting DT Timmy Jernigan, and suspended starting LB Nigel Bradham.

This season, while the Eagles have some players who won't be a go, almost all of their starters should be available.

• LB Kamu Grugier-Hill (knee): Grugier-Hill's Grade 3 MCL sprain will keep him out until sometime, ohhhh, around Week 3 or 4-ish. In his place, a motivated Zach Brown will likely take Kamu's place against against his former team.

• OT Jordan Mailata (back): Mailata would have likely been inactive for this matchup, even if healthy.

• QB Nate Sudfeld (wrist): It'll be interesting to see who the No. 2 quarterback is between Sudfeld and Josh McCown whenever Sudfeld returns. Sudfeld is the No. 2 on the Eagles' depth chart at the moment, though that's not exactly reliable. Still, the Eagles are in capable hands with McCown should Wentz need to come out, in the short-term, anyway.

• TE Richard Rodgers (IR): The Eagles placed Rodgers on the season-ending IR list with a foot injury. Rather than keep a third tight end at final cutdowns, the Eagles are rolling with just Zach Ertz and Dallas Goedert.

• QB Colt McCoy (fibula): McCoy has been Washington's long-term backup since 2014. He was in contention to start for them this season, but the broken fibula suffered against the Eagles last season has reportedly had complications, delaying the healing process.

• CB Fabian Moreau (foot): Moreau would normally be the starting slot corner. He will likely be replaced by Jimmy Moreland, a rookie seventh-round pick who reportedly had a good training camp. Surely, the Eagles will look to test whoever lines up opposite Nelson Agholor in the slot.

• TE Jordan Reed (concussion): Reed is Washington's only truly proven pass-catcher at wide receiver or tight end. He suffered the seventh known concussion of his career (dating back to college) on a cheapshot by Keanu Neal of the Falcons during the preseason.

UPDATE: Reed is out, and so too is Adrian Peterson, apparently.

Jordan Reed and Adrian Peterson will be inactive for Redskins today. Some pretty serious hardware on the bench.

• LT Trent Williams (holdout): 36-year-old Donald Penn is slated to start in place of Williams at LT, and former Giants bust Ereck Flowers will likely be starting at LG. Woof. RDE Derek Barnett and RDT Malik Jackson should be licking their chops.

In case you missed any of the Williams saga, the short-short version is that he is holding out, and has stated repeatedly through sources that he is never playing for Washington again.

• LB Reuben Foster (IR): After his third arrest in a calendar year, the San Francisco 49ers waived Foster during the 2018 season. Fewer than three days after the third arrest, which was on domestic violence charges, Washington claimed him off of waivers. They were roundly (and rightly) criticized for it. Foster did not play the rest of 2018, but he figured to be a big part of Washington's plans on defense in 2019, as he was slated to start at inside linebacker, replacing Zach Brown, who is now with the Eagles. He tore his ACL in May, in addition to suffering nerve damage. Obviously, he is done for the season.