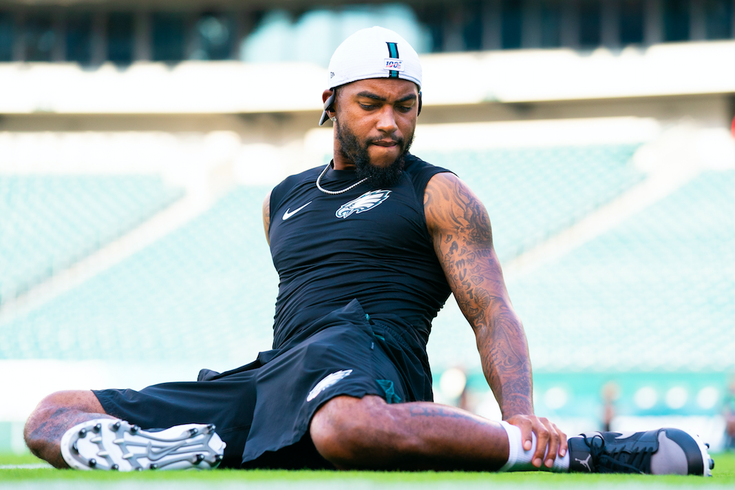 Eagles rookie running back Miles Sanders has played football in Pennsylvania at every level of the sport. He's excited to have landed in Philadelphia, where he has vowed to make a name for himself.

Philadelphia Eagles rookie running back Miles Sanders is ready to prove that he's not the "next" anyone, including Saquon Barkley, a fellow Penn State stud and Giants star.

With their second round pick in April, the Eagles selected Sanders in hopes that he solidifies a position that has been in flux since the departure of LeSean McCoy, another Pennsylvania running back whose reputation preceded him in the NFL.

Writing Friday for The Players' Tribune, Sanders introduced himself formally to the city of Philadelphia, explaining why it means so much to him to be an Eagle. Growing up in Western Pennsylvania and playing at Braddock's Woodland Hills High School, Sanders went on to Penn State and now gets to remain in the Keystone State as a pro.

It's a blessing and a curse Sanders would like to put behind him:

(H)ere’s the thing about growing up playing football in Pennsylvania: If you’re good enough, you get labeled as the next so-and-so. We’ve had so many great football players come out of this state over the years, especially recently. So there are some kids out here in PA right now being called the next Tyler Boyd, or the next Marvin Harrison, or the next Aaron Donald — all Pennsylvania legends.

Sanders said he was first compared to McCoy during his high school days and then ran into the wall of Barkley, who dominated at Penn State and claimed Offensive Rookie of the Year honors with the Giants last season.

Sanders said sitting on the bench behind Barkley for two seasons was the most difficult thing he's had to do in his football career:

Looking back, I’m thankful for that struggle because I used that time to grow as a person, and also to get stronger and more explosive as a running back. I really took my game to another level, and I learned a lot about myself and what I’m capable of in the process.

While Barkley offered his teammate encouragement on his way out of Penn State, he and Sanders will now see each other twice a year in the NFL. The combination of the rivalry and their history together is likely to produce some exciting competition from drive to drive.

When the Eagles take on Washington this Sunday, Sanders realizes he'll be in a huddle full of Pro Bowlers with Super Bowl rings. His teammates have taken him under their proverbial wings and are teaching him how to be successful at the professional level.

"I feel like I'm the luckiest guy in Pennsylvania," Sanders said.