Why do Eagles fans always reply to the team's hype videos with super weird tweets?

If you've watched a video on the Birds' Twitter account, you've likely run into some very odd declarations 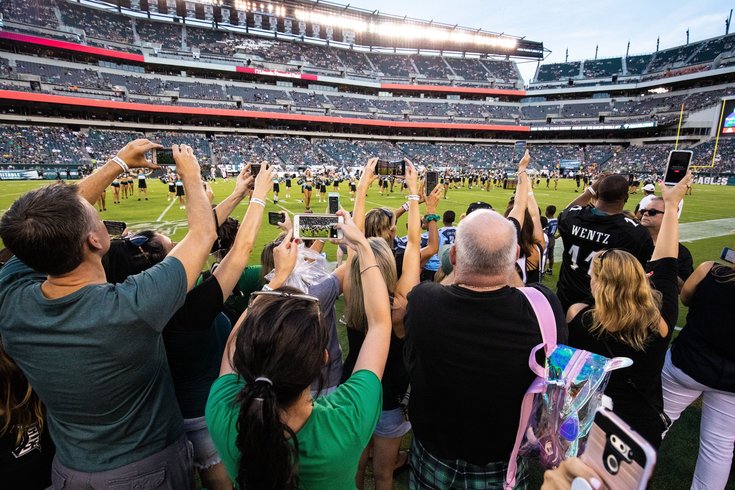 On Friday morning, the Philadelphia Eagles' official Twitter account shared a two-minute video designed to stir the team's fans into a frenzy ahead of Sunday's season opener against Washington. Before I even clicked on the video to watch it for myself, I knew what I would find in the replies.

You see, a certain sect of Eagles Twitter — the people who talk to one another about the Eagles online every single day — has turned replying to an Eagles hype video into an art form, a playground for very strange comedy.

RELATED: The Eagles' hype video has us ready for Sunday's season opener

The video was posted at 7 a.m. By 7:45 a.m., before plenty of people in Philadelphia were dressed for work, Eagles fans had fired off these absolutely deranged tweets:

I’m ready to run butt naked down the Schuylkill Expressway😤😤😤😤

My yelling just set off the smoke alarm

I just ran outside, stole the gas company’s jackhammer and tore up my entire block

Just put my head through my computer moniter. IT are on their way.

Just downed a 24oz black coffee and ate the cup

I just ate 10 habaneros and shit out a grenade LESSSSGGGOOOOOO

You get the idea.

What began with fans expressing their excitement by saying they were ready to run through walls has morphed into this very weird ritual. How did we get here?

These crazy jokes have roots in Twitter comedy from the last handful of years, including back when the Eagles were much worse and the team's fans were hilariously fatalistic about the franchise's future. This tweet, from Eagles Twitter maven @ArkansasFred, is of particularly importance:

It's not exactly the same formula, but the general gist — an absurd, violent scenario involving the Eagles — and the tone in the delivery are both present. Fellow Philly Sports Twitter person @treblaw, the guy who pretended to spill coffee on Adam Schefter during the 2017 NFL Draft, has been trafficking in these weird tweets for years. There are probably plenty of Philly Sports Twitter accounts responsible for the trend.

MORE SPORTS: Natalie Egenolf: We are all the Eagles' naked offensive line

The premise for these tweets also runs very close to what the New Yorker's Jia Tolentino wrote about in a piece this past June. Tolentino examined the trend of Twitter users asking celebrities to punch them in the face, or step on their throats:

"One takeaway from all this is that young people really love celebrities. Another is that we’re craving unmediated connection so desperately that we would accept it in the form of murder."

Sports culture and celebrity culture often overlap, especially in the social media age. Asking someone famous to be violent towards you is an odd and popular thing that Internet users do. Here, Eagles fans seem to have taken this one step further in their replies, by explaining the ways they themselves are acting out instead of asking to be killed by Swoop.

As recently as 2014, though, the replies to videos like the famous 2014 "This is everything, and more" Bradley Cooper piece were very boring:

“@Eagles: This is everything. And more. #FlyEaglesFlyhttps://t.co/rUJYeniVjT” if this doesnt pump u up i feel bad for you 👌🏈

This means we're dealing with a fairly recent development, which is often the case on the Internet. By this time last year, Eagles fans were tweeting like crazy people. Here's Zoo With Roy's reply from last year's season-opening hype video:

The exact moment when Eagles Twitter adopted this weird sense of humor isn't easy to pinpoint, but it has clearly been adopted by fans.

Of course, if you want to participate in this trend, you should know that not every piece of video content from the Eagles' Twitter account gets this reaction. Don't go yelling about smoking 100 cigarettes and pooping out a football if it's just a video of Doug Pederson's weekday press conference.

These kinds of videos, and these reactions, are reserved for big games, like the regular season opener, a particularly spicy division rivalry game, or playoff games. You'll know it when you see it, and when you see tweets like this popping up in the Eagles' replies: