Handing out 10 awards from the Eagles-Bears playoff game 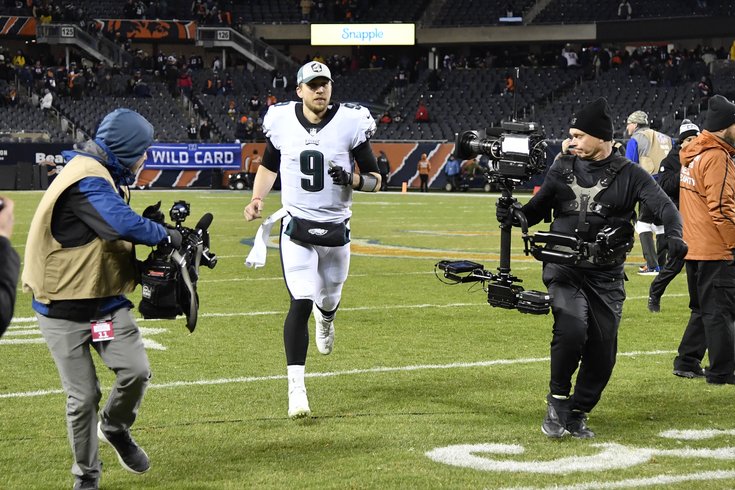 The Philadelphia Eagles have won a playoff game! On Sunday, they defeated the Chicago Bears on the road in what was a sloppy, but tough win over the best defense in the NFL.

He left the game with the lead, much like he did during the 2013 playoffs against the Saints.

2) The 'Snub' Award: Lane Johnson and the Eagles' offensive line

Johnson was snubbed both for the Pro Bowl, and the AP All-Pro team. After he learned he didn't make the Pro Bowl, Johnson felt like he had something to prove, so he shut down J.J. Watt for four quarters against the Texans Week 16. After also missing out on the All-Pro team, Johnson and the Eagles' offensive line handled Chicago's fierce pass rush all night. On the game, the Bears had just one sack and five hits on Foles.

Peters is in his 15th season in the NFL. He has played in 192 regular season games, and now four playoff games. Sunday's win over the Bears was the first time Peters has ever played in a playoff win. Long overdue for one of the best players in franchise history.

Maddox has proven to be a good player this season, when forced into action playing a variety of positions, from slot CB, to safety, to outside CB.

On Sunday, the Bears exposed a chink in the armor, when they used Maddox's aggressiveness against him, beating him multiple times on double moves.

Parkey hit an incredible number of uprights this season:

Apparently, reserve defensive tackle Treyvon Hester got a fingertip on the ball, so Bo Wulf of The Athletic took a picture of his hand:

The Eagles are still alive thanks to the left hand of Treyvon Hester, who tipped Cody Parkey’s final kick. pic.twitter.com/NliKZhQ2eZ

6) The 'CATCH IT!' Award: Maddox and Tre Sullivan

Maddox and Tre Sullivan each had bad drops of what should have been interceptions. Maddox dropped what could have potentially been a pick six, while Sullivan dropped an interception opportunity in the end zone, that instead led to a Bears field goal. Credit them for being in good positions to make plays, but not finishing nearly cost the Birds dearly.

Goedert ran a great route on a TD reception from Foles, and he had a clutch pickup of a first down in which he broke a couple tackle attempts. In his rookie season, Goedert has proven to be a really good tight end who doesn't appear to have any notable flaws. He can catch, he can get open, he can run after the catch, and he can block.

8) The 'Hey He Did Something' Award: Golden Tate

In half a season with the Eagles, Tate had just 30 catches for 278 yards and one TD. That was hardly the production the Eagles' front office was looking for when they traded a third-round pick for Tate, who was an eight-game rental, and possibly more, depending on whether or not the Eagles made — and advanced in — the playoffs.

That was still an ill-advised trade, though Tate certainly made a few important plays on Sunday, most notably a TD catch on fourth down with just under a minute to play. With more positive playoff contributions, maybe that trade will end up being worth it after all.

9) The 'It's Always Something With These Guys' Award: The officials

Another game, another weird call by the officials. On a play in which Cre'Von LeBlanc separated the football from Bears wide receiver Anthony Miller, the original ruling on the field was an incomplete pass. Upon further review, it was determined that it was a catch and fumble, but since neither team made a clear recovery of the ball (because an official quickly picked up the ball after the incompletion), the ball just went back to the original line of scrimmage. Huh? Well apparently, that was officiated correctly:

From the casebook regarding incomplete passes reversed to catch/fumble, the third paragraph has the relevant information: pic.twitter.com/TQizOr7ZFP

The Eagles kinda got screwed on that play by the referee who picked up the ball. Otherwise, an Eagles player would have almost certainly picked it up, as there were a number of Eagles defenders near the ball after the play.

The Saints are the last team to beat the Eagles in the playoffs, when the Birds lost at home to Drew Brees and the gang after the 2013 season. Oh, and there's the matter of the 48-7 shellacking the Saints laid on the Eagles earlier this season when they ran up the score late. The Eagles will have a chance to avenge those demons.