Handing out 10 awards from the Eagles-Ravens preseason game 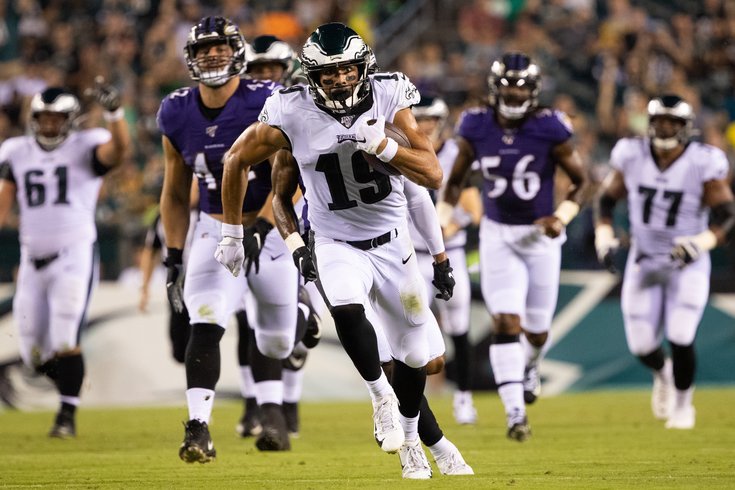 In a game that was ended 11 minutes and 43 seconds early, the Baltimore Ravens beat* the Philadelphia Eagles 26-15. Protest! OK, maybe not. As always, we hand out 10 awards.

1) The 'Better To Be Safe Than Sorry' Award: Carson Wentz

Cam Newton done for the night with a foot injury.

The risk just isn't worth the reward.

2) The 'Make It Stop' Award: Penalties

In the first half alone, the Eagles had 12 penalties for 90 yards. A whole slew of them were pre-snap penalties. Sloppy. There was one series in which both offensive and defensive pass interference were called on the same play, followed by an unabated to the quarterback penalty on the Eagles, followed by a false start on the Ravens.

Sick of terrible football, Eagles fans actually booed the false start by the Ravens. That's not a joke. They literally booed an opposing team's penalty.

In a shortened game, the Eagles and Ravens combined for 24 penalties. Gross.

In two series, Kessler was 3-of-5 for 34 yards, which doesn't sound bad, but his performance was ugly. For the preseason, he was 7-of-15 for 57 yards. Here's how his six drives have ended this preseason, via Reuben Frank of NBC Sports Philly:

I'm not optimistic that Kessler will make the team.

The difference between McCown and the other Eagles' backup quarterbacks was obvious Thursday night, when McCown started dropping beautiful throws all over the yard after a shaky start. McCown connected with J.J. Arcega-Whiteside and TE Alex Ellis on a pair of dimes. Here's the throw to Ellis. (We'll show the one to J.J. in a minute).

McCown back there just playing catch with his new TE 🙌#BALvsPHI pic.twitter.com/8HkllcOsAs

In previous preseason games, rookies Andre Dillard, Miles Sanders, and hell, even Clayton Thorson got kudos for their play. Against the Ravens, it was J.J.'s turn. On the night, he had eight catches for 104 yards, and the following TD on a great route.

JJ Arcega-Whiteside with the GORGEOUS route for six 🙌🙌 @jjarcega_22 pic.twitter.com/Xx6Fiv6cFm

Arcega-Whiteside could find it difficult to earn snaps this season in a loaded Eagles offense, but if he's called upon, he gave good reason to believe that he can contribute.

6) The 'We're Back' Award: Rodney McLeod and Corey Clement

McLeod played in his first game since tearing his ACL Week 3 against the Colts last season, and while I could use the benefit of a re-watch, whenever I focused on McLeod, he seemed to be moving around pretty well. If he's healthy, that would solidify one of the shaky positions on the roster.

Meanwhile, on offense, Clement played in his first game after he was shut down for the season last year with, um, whatever his mystery injury was. Clement too moved well, as we've noted in our practice notes recently.

7) The 'Congrats to the Penn State Dorks' Award: Trace McSorley and Miles Sanders

McSorley was dealing against the Eagles, completing 19-of-28 passes for 203 yards and two TDs. He made a number of impressive throws, after looking downright bad during the Eagles-Ravens joint practices.

Meanwhile, Sanders didn't get a single carry, and you know what? THAT'S GREAT NEWS, as it shows that the Eagles feel that he's worth protecting in a meaningless game.

Playing with the second-team offensive line, Wisniewski was the right guard, while Nate Herbig was at center.

Why is that bad? Well, the Eagles don't really have a backup center, unless you count starting LG Isaac Seumalo. The Eagles could certainly move Seumalo to center if Jason Kelce went down, but they'd probably prefer to just insert a competent backup center in there instead.

After a summer in which Wisniewski struggled mightily with his shotgun snaps, it's reasonable to assume the Eagles no longer trust him at center. Instead, they are trying out an undrafted rookie free agent in Herbig at center, despite Herbig's lack of experience at the position. That's bad for Wis' brand.

Elliott has made two field goals from over 50 yards this preseason, but he has also missed attempts of 40 and 41 yards, which pretty much follows his career path.

10) The 'THANK YOU GOD' Award: The Sweet, Glorious Lightning

With 11:43 left in the fourth quarter, God decided he'd seen enough, and sent some lightning, forcing everyone to go home.

Only one of these stupid games left until they count.