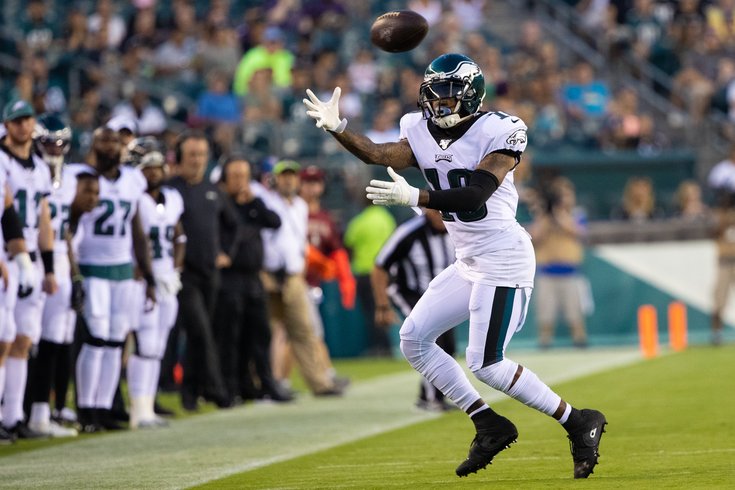 Carson Wentz is the headline-maker in Philadelphia and his absence from the first team offense, as most of it took the field Thursday night, will end speculation over whether he will suit up and play this preseason.

But several of the Eagles' top players on both sides of the ball did make their debuts in the third preseason. For a few, their contributions were impressive. For others, their mere healthy presence on the field gives some confidence heading into the regular season.

Here's what Eagles starters who made their (pre)season debut against the Ravens did in limited time.

Jackson's name was first called when a Cody Kessler pass went over his head, and a second time for a false start. That would be it for the speedy wideout in his return to the Linc.

Ertz got on the board in the first quarter with a dump off reception with a little run after catch from Kessler. It was his only catch, a 13-yard gain on a Kessler pass.

In Philly's second drive, Nelly caught a screen pass but didn't make much of it.

Jeffery, like the other skill position players didn't see much action. He had no catches or targets.

Clement started the game and got the first carry of it but it was his second carry — an 11-yard gain on a delayed handoff from the gun — that was the play that made him look like his healthy old self. With the offense not exactly firing on all cylinders, Clement did the best he could netting seven handoffs for 25 yards, plus a few good blitz pick ups.

Lane Johnson and Brandon Brooks were understandably absent as they prepare for the regular season but the trio above, along with Jordan Mailata and Hal Vaitai were rusty but solid during their time on the field together. On Clement's first quarter first down scamper, the line burst open a big hole as it was looking in mid season form.

There were a few missteps, but they fall on other parties more than they do the offensive line — like a dropped snap from Kelce by Josh McCown. With Wentz out, the first team O-line hasn't spent much time working with back up quarterbacks so the timing was a bit off.

One note on Peters — he looked very agile and healthy during the series' he was on the field, a very good sign for the 37-year-old vet.

The Eagles defense was more or less fully intact aside from Fletcher Cox and a few minor exceptions, with McLeod making his debut a week after most of the rest of this week's starters made theirs against the Titans.

McLeod was able to throw his weight around a bit, making a tackle down the field after a big gain on a Trace McSorley throw late in the first frame, and a second — this one a tackle for loss on a zone read. He'd end up tallying three in a quick but impressive debut — a reassuring one after knee surgery shortened his 2018.