Historically, Philadelphia quarterbacks stink after the Eagles trade them 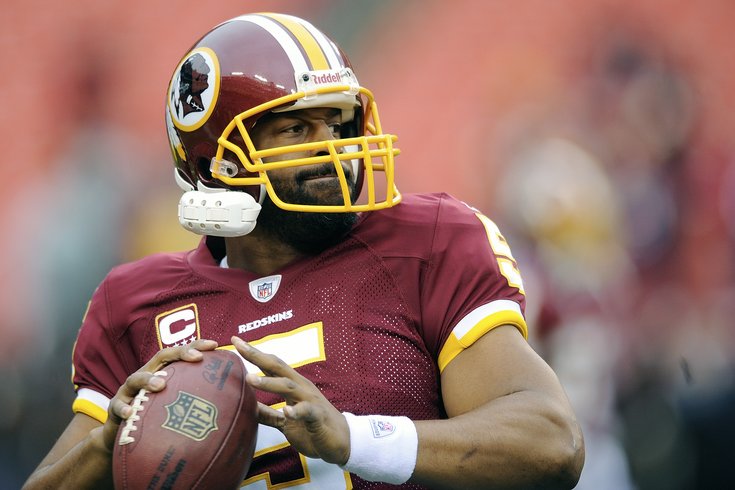 On the one hand, that clearly illustrates how unstable the Eagles' quarterback situation has been since the McNabb days. On the other hand, at least the Eagles have avoided having egg on their face (Sonny Jurgensen aside, way back in the day) by avoiding the embarrassment of a traded quarterback performing well elsewhere.

Here is a look at all the quarterbacks the Eagles have traded since the beginning of the McNabb era, and how they performed with their next team.

Rodney Peete, 1999: Traded to Redskins for a 6th-round pick

Peete played in three games for the Redskins. He had 17 pass attempts before moving on to Oakland the following year.

Bobby Hoying, 1999: Traded to Raiders for a 6th-round pick

Hoying had seven pass attempts for Oakland over two years before he retired in 2001.

Feeley saw action in just 11 games in Miami, posting a horrendous 61.7 QB rating. Midway through the 2005 season, the Dolphins traded Feeley to the San Diego Chargers for Cleo Lemon.

Holcomb played in three games for the Vikings in 2007, posting a 73.1 QB rating. He retired the following offseason.

McNabb played one year in Washington, posting a QB rating of 77.1. He was demoted to the third-string by Mike Shanahan before the Redskins shipped him off to the Minnesota Vikings for a sixth-round pick the following offseason.

Kevin Kolb, 2011: Traded to the Cardinals for a 2nd-round pick and Dominique Rodgers-Cromartie

Kolb ended up starting just 14 games for Arizona, posting a QB rating of 83.2 in two years there. He suffered a myriad of injuries, including turf toe, a concussion, and a rib injury, before the team asked him to take a pay cut. When the Cardinals and Kolb could not come to an agreement on a restructured deal, they cut him.

Nick Foles, 2015: Traded to the Rams along with a 2nd-round pick for Sam Bradford

In Foles' only season with the Rams, he was arguably the worst starting quarterback in the NFL, posting a 69.0 QB rating before being benched in favor of Case Keenum. He was released after one season.

Matt Barkley, 2015: Traded to the Cardinals for a 7th-round pick

Barkley was a regular on the Cardinals' inactive list during the 2015 season, never getting into a single game. He was cut Saturday.

Mark Sanchez, 2016: Traded to the Broncos for a conditional 7th-round pick (that became nothing)

Sanchez lost a quarterback competition to a Trevor Siemian, a guy with precisely zero career pass attempts. He was released Saturday, and then quickly signed by the Dallas Cowboys.