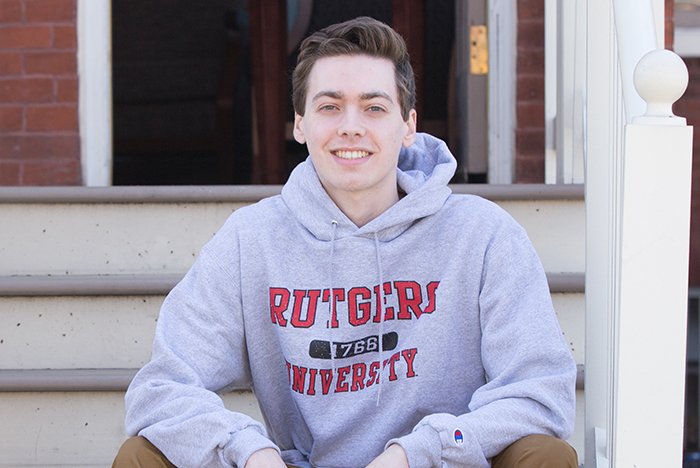 Colin Sheehan is a student at Rutgers Law School Camden.

Colin Sheehan spent very little time in Camden before he began studying political science in the Honors College at Rutgers University-Camden. That quickly changed after an adviser recommended that he should get involved in the city by joining the school’s Civic Scholars program.

“On my very first project, we stood on a street corner and we had to ask people what their dream for Camden was,” said Sheehan, who is on track to earn his bachelor’s degree in 2018 and a law degree in 2020. “That was an eye-opening experience.”

Since that day, he has worked on many civic engagement projects in Camden addressing homelessness, hunger and education. He’s also been deeply involved in research, working closely with one of his professors to author a blog on gender issues during the 2016 presidential election while also assisting her with research for a book she was preparing for publication.

“My time in Camden has really shaped what I care about in terms of political science and also how I’m able to approach those things. I get to see a lot of socioeconomic and political issues firsthand and how they have impacted people.”

These valuable opportunities provided Sheehan with the experience required to land a public policy internship on Capitol Hill for the National Network to End Domestic Violence during the summer of 2017. Now, he’s in Rutgers Law School completing a dual-degree program that allows students to earn bachelor’s and law degrees in six years. Sheehan plans on having his law degree in hand before he turns 24 and hopes to work as a legislative aide in either the federal or a state government.

When asked why he chose Rutgers-Camden, Sheehan said “price was the deciding factor. I got into every other school I applied to. At the end of the day, looking at the cost, it was no competition. The opportunity to do it in less time and for less money—I couldn’t really pass that up.”

But even though his initial decision was based on cost, Sheehan believes the greatest value lies in the experiences he’s had during his time at the school.