How the Kitty Genovese case went viral in 1964

By The Lineup Staff

In 1964, bar manager Kitty Genovese was repeatedly stabbed and eventually killed on her way home from work in the early hours of the morning. At the time, Abe Rosenthal was the metropolitan editor at The New York Times, and the paper ran a short story about the murder, which didn't gain much attention.

Ten days later, Rosenthal had lunch with the city's police commissioner and found out one disturbing fact about the case: According to the commissioner, 38 people heard Genovese's cries for help that night, and only one called the police after the victim had already died.

A great many hard things have been said about these 38, and I am sure they are bewildered, and I know they are resentful. But it is important to say this — that what they did happens every night, in every city. – A.M. Rosenthal, in "Thirty-Eight Witnesses"

Rosenthal was appalled by this information, and assigned one of his reporters, Martin Gansberg, to investigate. The resulting story, "37 Who Saw Murder Didn't Call the Police," ended up on the front page of the Times and brought Genovese's murder to national attention.

Rosenthal went on to write a short, true crime book "Thirty-Eight Witnesses" based on investigative journalism he did on Genovese's murder. Although many other articles and books have been written about the case in the last 51 years, Rosenthal's account still remains the original report of the events that happened that night – and the reason the story went viral in the first place.

AN EXCERPT FROM 'THIRTY-EIGHT WITNESSES'

This small book is about a woman I never met but who touched my life as she did the lives of many other people—some tens of thousands, I think. I know very little about her except her name, which was Catherine Genovese, and her age, which was 28, and the manner of her dying.

It is also about 38 of her neighbors, about whom all I know is that they are much like other people of decent middle-class background. The only thing that distinguishes them and, I believe, now harrows their lives a bit, is that on the night of March 13, 1964, each one of them turned away from a cry in the night. 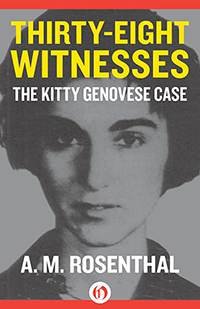 A great many hard things have been said about these 38, and I am sure they are bewildered, and I know they are resentful. But it is important to say this — that what they did happens every night, in every city. The terror of the story of Catherine Genovese is simply that by happenstance all 38 did that night what each one alone might have done any night without the city having known, or cared. In my own mind, and I believe in the minds of others, this has presented a question that troubles and will not recede: is the ugliness in the number or is it in the act itself, and are thirty-eight sins truly more important than one?

This small book is about a number of connected things — an anecdote told in passing by a commissioner of police who looks like a tough Irish cop because he is a tough Irish cop but who also happens to be a man of knowledge and sensitivity; a newspaper story; a few sociologists; a most cautious theologian; and how so many good people try so desperately to make collective their individual guilt.

At the end of this book are set down some of my thoughts on the meaning of the death of Catherine Genovese. But in some embarrassment I say now that these are not meant as a sermon. I say this in the haunting fear of being told—by myself, mostly—to practice what is preached and because I know I cannot. All I believe, and this most fervently, is that a truth remains a truth whether or not a man has the strength to follow it.

This is what the police say happened beginning at 3:20 A.M. in the staid, middle-class, tree-lined Austin Street area:

28-year-old Catherine Genovese, who was called Kitty by almost everyone in the neighborhood, was returning home from her job as manager of a bar in Hollis. She parked her red Fiat in a lot adjacent to the Kew Gardens Long Island Rail Road Station, facing Mowbray Place. Like many residents of the neighborhood, she had parked there day after day since her arrival from Connecticut a year ago, although the railroad frowns on the practice.

She turned off the lights of her car, locked the door and started to walk the 100 feet to the entrance of her apartment at 82-70 Austin Street, which is in a Tudor building, with stores on the first floor and apartments on the second.

The entrance to the apartment is in the rear of the building because the front is rented to retail stores. At night the quiet neighborhood is shrouded in the slumbering darkness that marks most residential areas.

Miss Genovese noticed a man at the far end of the lot, near a seven-story apartment house at 82-40 Austin Street. She halted. Then, nervously, she headed up Austin Street toward Lefferts Boulevard, where there is a call box to the 102nd Police Precinct in nearby Richmond Hill.

She got as far as a street light in front of a bookstore before the man grabbed her. She screamed. Lights went on in the ten-story apartment house at 82-67 Austin Street, which faces the bookstore. Windows slid open and voices punctured the early-morning stillness.

From one of the upper windows in the apartment house, a man called down: “Let that girl alone!”

The assailant looked up at him, shrugged and walked down Austin Street toward a white sedan parked a short distance away. Miss Genovese struggled to her feet.

Lights went out. The killer returned to Miss Genovese, now trying to make her way around the side of the building by the parking lot to get to her apartment. The assailant stabbed her again.

Windows were opened again, and lights went on in many apartments. The assailant got into his car and drove away. Miss Genovese staggered to her feet. A city bus, Q-10, the Lefferts Boulevard line to Kennedy International Airport, passed. It was 3:35 A.M.

The assailant returned. By then, Miss Genovese had crawled to the back of the building, where the freshly painted brown doors to the apartment house held out hope of safety. The killer tried the first door; she wasn’t there. At the second door, 82-62 Austin Street, he saw her slumped on the floor at the foot of the stairs. He stabbed her a third time—fatally.

It was 3:50 A.M. by the time the police received their first call from a man who was a neighbor of Miss Genovese. In two minutes they were at the scene. The neighbor, a seventy-year-old woman and another woman were the only persons on the street. Nobody else came forward.

The man explained that he had called the police after much deliberation. He had phoned a friend in Nassau County for advice and then he had crossed the roof of the building to the apartment of the elderly woman to get her to make the call.

“I didn’t want to get involved,” he sheepishly told the police.

Six days later, the police arrested Winston Moseley, a 29-year-old business-machine operator, and charged him with the homicide. Moseley had no previous record. He is married, has two children and owns a home at 133-19 Sutter Avenue, South Ozone Park, Queens. On Wednesday, a court committed him to Kings County Hospital for psychiatric observation.

When questioned by the police, Moseley also said that he had slain Mrs. Annie May Johnson, 24, of 146-12 133rd Avenue, Jamaica, on February 29 and Barbara Kralik, 15, of 174-17 140th Avenue, Springfield Gardens, last July. In the Kralik case, the police are holding Alvin L. Mitchell, who is said to have confessed that slaying.

The police stressed how simple it would have been to have gotten in touch with them. “A phone call,” said one of the detectives, “would have done it.” The police may be reached by dialing “O” for operator or Spring 7-3100.

The question of whether the witnesses can be held legally responsible in any way for failure to report the crime was put to the Police Department’s legal bureau. There, a spokesman said: said, “but where they are in their homes, near phones, why should they be afraid to call the police?”

This story was originally featured on The-Line-Up.com. The Lineup is the premier digital destination for fans of true crime, horror, the mysterious, and the paranormal.