Hundreds spark up at Art Museum – because they can 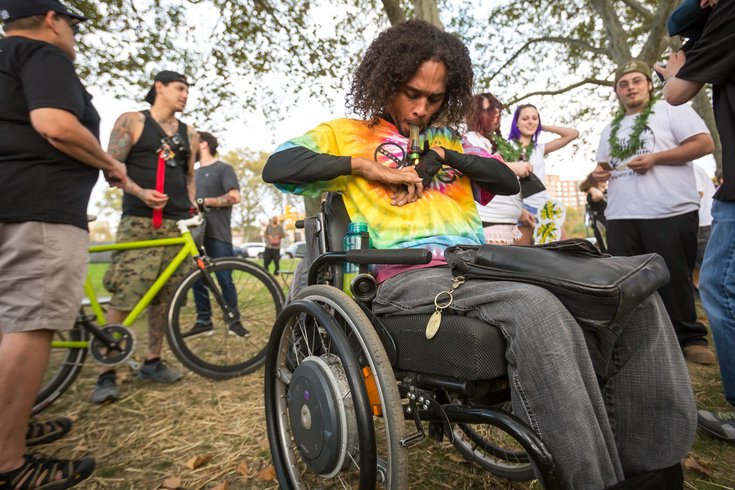 German Parodi, a proponent of marijuana decriminalization, attended Thursday afternoon's event at Eakins Oval to represent those with disabilities who need cannabis for medical purposes.

Activists, enthusiasts and medicinal users descended on Eakins Oval in front of the Philadelphia Museum of Art on Thursday to smoke pot.

About 250 people filled the grass — to smoke "grass" — during a bring-your-own, Pop-up Weed Garden.

"This is just a representation of how America feels about cannabis," said Ashley Greenwald of South Philadelphia, who helped organize the event. "Look around, you just see happiness."

The event celebrated the decriminalization two years ago of small amounts of marijuana – less than 30 grams. Judging by the thick, heavy cloud of smoke wafting across the Ben Franklin Parkway, most participants seemed to enjoy the opportunity to smoke a joint or a bowl without fear of arrest or harassment by law enforcement.

For Stephanie Carpenter, 24, of South Jersey, the "Pop-Up Weed Garden" allowed her to meet fellow marijuana smokers and relax in the sun. In her home state, she said, the occasion to smoke pot in the outdoors is rare under the threat of arrest.

"For me, this feels free," she said, as she sat on the grass and lit a joint. "When I'm here, I feel like we can be who we are all the time." 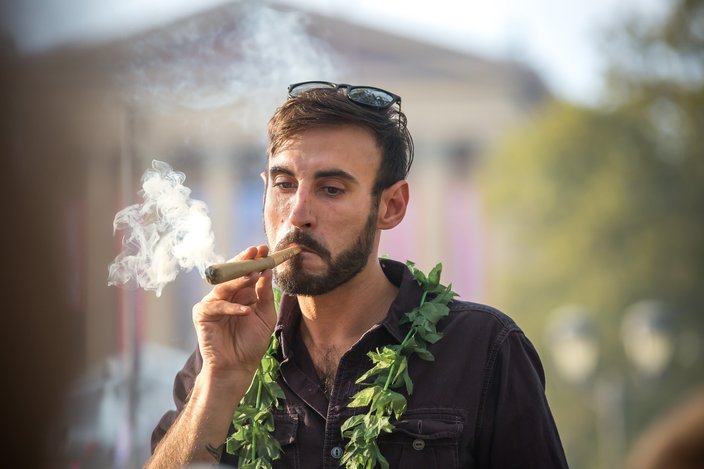 Her friend, Joe — who didn't want to share his last name out of concern it could jeopardize his job in New Jersey — said Philadelphia has made a strong step in the right direction with decriminalization, but more needs to be done.

"This is a step, but there should be free and safe access for anyone who needs this medicine," he said.

"This is a very eclectic group of people. It's a great representation of our country." – Jennifer Zavala, former Top Chef contestant

The event also drew former Top Chef contestant Jennifer Zavala, who runs a catering company, Cherry Bomb Catering, that offers cannabis-infused foods. She also hosts an internet-based show called "High End Cuisine." On this day, however, she attended without any cannabis infused food, but to support her friends and mark the anniversary.

"This is a very eclectic group of people," she said. "It's a great representation of our country."

Bernadette Scarduzio, 37, of Drexel Hill, said marijuana helps treat the symptoms of a neurological condition, Charcot Marie Tooth Syndrome, which affects the muscles of the extremities and can make it difficult even to walk.

"It's in my hands and feet and it feels like it works its way up," she explained. "You lose the ability to do everyday tasks."

Scarduzio said she's had 28 operations and goes to physical therapy regularly, but the medicine she has been prescribed makes her sick. 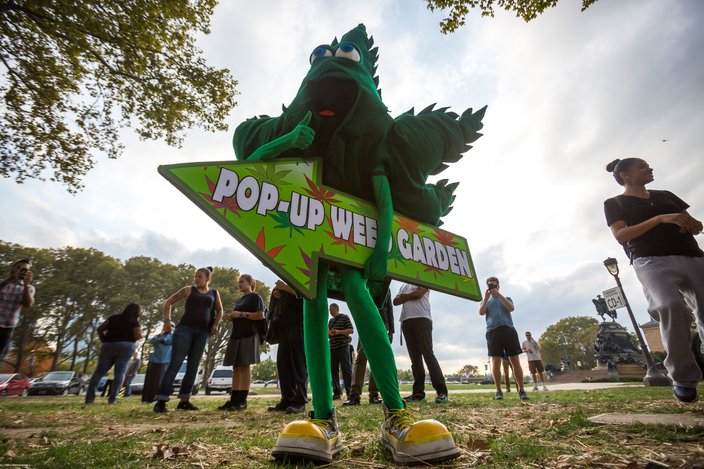 Hempy the Pot Leaf was on site pointing out the location of the 'pop-up weed garden' - as if passers-by couldn't see the huge smoke plume overhead.

After struggling with pain and being unable to sleep, Scarduzio found marijuana could treat her symptoms, without side effects.

"I feel relieved that this is decriminalized," she said. "There's a lot of medication that can make CMT worse. But marijuana has no side effects. It just makes me hungry, and I needed that because I had been losing so much weight."

When she first found marijuana helpful to treat her disease several years ago, she was still uncomfortable talking about using the drug. The 2013 documentary film, "Bernadette," looked at her life as a sufferer of CMT. During filming, Scarduzio said she was reluctant to allow the director to film her smoking weed.

"I was worried what people would think if they saw me smoke. But I believed in it. It was helping me," she said. Ultimately, she allowed the filmmaker to depict her smoking marijuana to treat her illness.

On Thursday, surrounded scores of smokers, Scarduzio said she was glad she did, noting that many people have since contacted her over social media to share their stories of using marijuana for medical reasons.

"I'm finally OK with being public with it," she said with a grin.