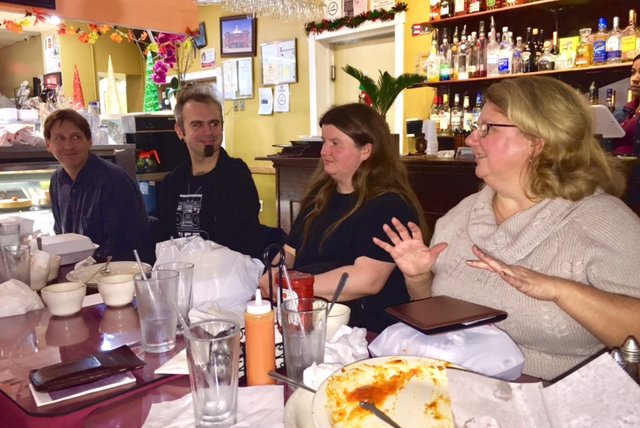 Joseph Russell and members of the Camden Supper Club eat around the city.

Dining out in Camden: Sounds counterintuitive for the uninitiated, right?

It’s true scrappy Camden is not gonna get confused with Philly, Cape May or even Collingswood as a fine dining mecca anytime soon.

It has a strong core of small ethnic restaurants, however, primarily Latin with a smattering of Asian and a venerable soul food joint. And virtually unknown outside their neighborhoods.

But Camden has a huge contingent of fans and people with enduring connections to the city through a combination of roots, family or work.

They are the impetus for the Camden Supper Club coming up on its two-year anniversary.

As clubs go, the threshold for joining is low: just pick an event, inform the club you're coming and show up hungry.

The group is the brainchild of Rutgers University prof Stephen Danley, a public policy professor, and Joseph Russell, a Center City web developer with roots in South Jersey.

Russell, 35, is a self-described urbanist who lives one town over from Camden in Collingswood. A confirmed neighborhood walker and biker, he’d made a point of finding new places even before the club.

He had a lightning bolt idea: Everybody eats!

If folks eat out in Camden, thought Russell, it means “supporting local today.”

While a gathering can draw as few as 10, they have also had 35 come out for a meal. Their email list has 140 names.

He describes participants as “adventurous and exploring.”

And while talking, especially about Camden, is a part of the draw, food remains central to the club’s appeal.

“Some of the food I’ve never had anywhere else before. One place had the most legit Mexican food I’ve had in my life,” he said. Corrinne’s Place, a soul kitchen, is a repeat favorite, he added.

Zara Wilkinson, a Philadelphian who works as a librarian at Rutgers, admits her major reason for going “is mainly to eat.”

And while she said she’s enjoyed every place they’ve dined, Corrine’s Place is a favorite.

“This is flipping the script,” she added on how Camden is usually perceived.

Sue Bowen, and her friend, Cathleen Ackroyd, work as teachers in Camden. Bowen grew up in Camden, Ackroyd in nearby Audubon Park. They often go to Supper Club together.

Their friendship, socializing with new people and food finds keep them going back.

“I love finding the little hidden places. And the amazing people from all over. It’s so diverse,” said Bowen.

“There are parts of the city I still don’t know even though I’ve worked there for 23 years,” said Ackroyd.

“This opens up new horizons,” she added. “It’s surprising each night who comes. You get to see people over and over, but there is always someone new.”