It's the first Friday of fall, so let's beatbox with Siri

Here's a fun iPhone trick to start your weekend off right 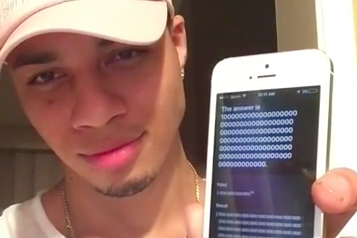 It’s Friday morning, which means it’s time for some lighter fare in a crazy, mixed-up world.

On Thursday night, in the course of “researching” potential Quizzo questions, I stumbled across a Siri trick that – until that moment – I didn’t know existed. I'm woefully late to the game (as evidenced since this January story), but whatever. I really want to write this because people don't remember what happened Monday, let alone nine months ago these days.

Before we get to the videos, I have a request for readers who are also iPhone users.

OK, press the home button to activate Siri. Then, ask her “What’s one trillion to the tenth power?”

Almost sounds like the background track for a rap (and/or other style of) song, doesn’t it?

You’re not alone in thinking so. In fact, numerous folks have uploaded YouTube videos incorporating the spoken-word answer that equates to 1e+120.

Anyway, hope you enjoy as much as I have:

Want to know what happens if you ask Siri to deduct even one figure from that tally? YouTube's got that for you, too: