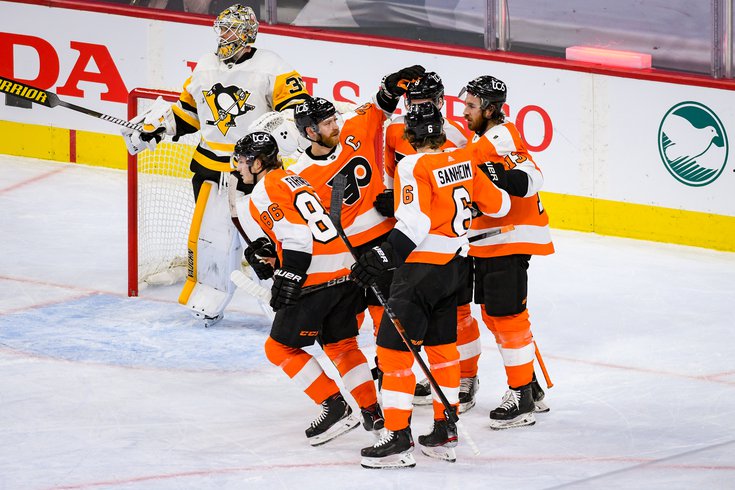 Flyers forward Joel Farabee celebrates his goal against the Penguins.

The sports calendar continues to be weird, and a 5:30 p.m. season opening hockey game played without fans to kickoff a modified 56-game season with geographic divisions is very on-brand for 2020-21.

And so the Flyers hit the ice for the first time, making good to begin a season high on expectations and optimism, winning over the Penguins in an impressive 6-3 debut Wednesday evening.

Six different Flyers netted a goal in the victory, as a monster third period took the wind out of their hated rivals' sails in a win that will have Philadelphia fans, for the first time in weeks, feeling good about themselves again. It doesn't hurt that the game was the first of the season, and played in front of a national audience.

Here's the good, the bad and the ugly as the 2021 campaign is now underway:

• Oh, the Flyers' power play. Last season it was... fine. Their 20.8% clip was 14th best in the NHL, and was a bit inconsistent. With the talent on the team as constructed, though, being in the middle of the pack is surely short of expectations. It was substantially worse than that in the playoffs in Toronto last summer. The special teams unit really was a challenge, as the team had a stretch of going 1-for-25 on the PP by mid-August.

A few days before the season started, defenseman Ivan Provorov said their struggles with an extra man were not for a lack of trying.

"I think it is more of execution," he said. "I think we are going to try to move the puck a little bit faster, just try to attack the net a little bit more and be more aggressive. But we have to execute. If you can’t execute, you can’t score."

With Philly on its first man advantage of the season, they showed they had a short memory — and that they could, indeed execute — as a strong power play that saw the Flyers generate a handful of shots and keep possession eventually led to an equalizing goal late in the first off a point shot by Erik Gustafsson (more on him in a bit) that was deflected in by James van Riemsdyk.

JvR with the first goal of the season for the Flyers! pic.twitter.com/M5le3Wqyjt

And just before you could to check on the roast chicken you had in the oven between periods (you know, because the game started at 5:30, and you were cooking dinner...), the Flyers once again scored on the power play, this time with a Gustaffson point shot re-directed ever so slightly yet again — this time by Nolan Patrick — with eight seconds left in the first to give Philadelphia a 2-1 lead at the break.

The Flyers have the lead! Announced as Gustafsson, might be Patrick. pic.twitter.com/nvpJ6SDguq

• The otherwise quiet Flyers made Gustafsson the centerpiece of their offseason, inking him to a one-year prove-it deal worth $3 million. The signing, which was in large part to replace veteran defenseman Matt Niskanen, was also a clear sign they they like it when their defensemen score (and assist with) goals.

Gustaffson, who scored 29 points last season and a whopping 60 the year before that, could be a diabolical one-two punch with Provorov, another offensive-minded blue liner (each playing with different linemates) both on the roster. He looked right at home generating much-needed offense on the Flyers power play Wednesday.

• Don't sleep on Joel Farabee, who hasn't been talked about much this offseason but has a knack around the net — and could find himself with ample opportunity to post points playing alongside Kevin Hayes (who assisted on his second period goal) and Claude Giroux. He scored late before the second horn to put the Flyers up 3-2.

Joel Farabee's first of the season, and third point of the game! pic.twitter.com/2QNSfIh3MW

He also assisted on the Flyers' first two goals, each of them secondary assists to set up Gustafsson who set up JVR and Patrick. There's a reason he's Alain Vigneault's choice to play with two of the teams top veterans.

• Michael Raffl must have heard me typing about veteran forwards, as the 32-year-old helped break yet another tie two-plus minutes later, netting a perfect pass from Scott Laughton with Pittsburgh goalie Tristan Jarry out of position, to get Philly up 4-3. There has been noise about the Flyers' fourth line, and with Nicolas Aubé-Kubel joining the aforementioned duo, and this could be a huge strength this season.

• Travis Konecny must have heard me typing earlier too, about young forwards scoring goals, as the 23-year-old earned his first of the season in the third by turning "garbage into gold," I believe the phrase is.

First, it was Travis Konecny! pic.twitter.com/pw0E2wRr5O

Seconds later, the Flyers officially broke open the floodgates with yet another strike, this one from Kevin Hayes. A 6-3 lead on opening day has to feel pretty good.

Then Hayes gave the Flyers a three goal lead! pic.twitter.com/TPCajO1Tzj

• You know how Flyers fans are always wondering "what would happen if this team could play for a full 60 minutes?" Well, they had lapses, obviously, as they surrendered a 2-1 lead and a 3-2 lead, but they didn't take a period off and didn't seem deterred by mistakes or by the Penguins repeatedly answering — and answering back. If this is a trend that continues this season, it's one that champions are made of.

• One thing that was abundantly clear seeing this team play for its first 60 minutes this season is that it is overflowing with talent. The puck skills, sense of space, skating and creativity that fans saw during the team's red-hot February and March last year are all still very much there. There were plenty of instances in this one where miscommunication, lack of chemistry or rust caused some kind of misstep, but this team has the ability to go pretty damn far. 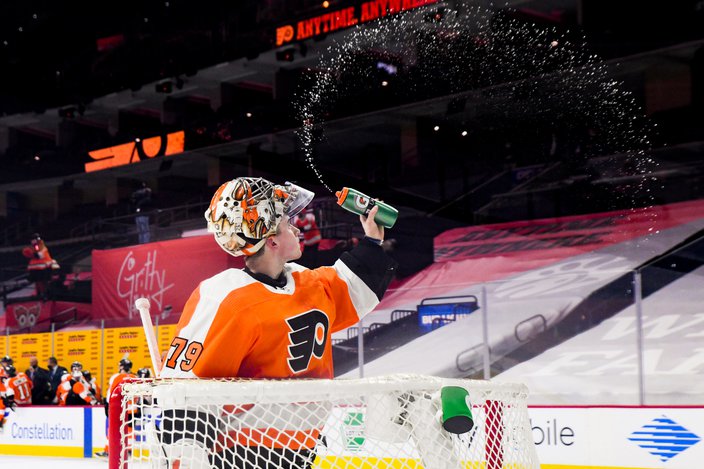 PHILADELPHIA, PA- JANUARY 07: Carter Hart #79 of the Philadelphia Flyers sprays water during the game against the Pittsburgh Penguins on January 07, 2021 at the Wells Fargo Center in Philadelphia.

• The Flyers looked essentially like the exact same team that was impressive early on in the bubble in Toronto and then ran out of gas. Only, take that team, take it away from hockey for four months and give it a truncated training camp with no preseason games. Oh, that's exactly what happened?

• It wasn't precisely one of the patented slow starts Flyers fans have gotten used to over the years from their favorite team, but the squad was clearly working a bit to find its footing early despite a few good looks on the offensive end. What can only be characterized as an unlucky bounce put the Penguins on the board with the first goal of the season, as a Mark Jankowski shot somehow found nylon over Hart's shoulder to put Pittsburgh ahead early. The Flyers' first penalty of the season came seconds later — not the best five minutes of hockey they've played.

• Carter Hart did a really, really bad thing in the second period. I'm not sure exactly what he was thinking by making such a poor decision with the puck, but with the Penguins on the power play and the puck on his stick, Hart took a terrible risk trying to thread the needle with a pass with white shirts everywhere, and the result is as you'd expect.

Carter Hart with big-time sauce on the primary assists to Sidney Crosby pic.twitter.com/rJNVByUnsB

That will certainly be a learning experience for the 22-year-old goalie, who is as good as anyone at stopping the puck and has natural talent as far as the eye can see. But developing a veteran discipline and knowledge of when to take a chance and when to be cautious is something that will take time for him.

To his credit, Hart made some absolutely ridiculous saves later in the second, as the Penguins opened up a decisive 23-16 shot advantage through 40 minutes. He would make 31 saves overall, but clearly he'll be thinking about that errant pass more than any save he may or may not have made in the convincing victory.

• Not much to say about Pittsburg's third goal, a snipe that Hart was unable to get a glove on.

The McCann-Jankowski-Tanev line isn't messing around.

• Ugly isn't the first word that comes to mind, but in a sense, the fact that NHL games between the Penguins and Flyers are being contested in arenas with only a handful of spaced out journalists and team employees in attendance is pretty darn depressing.

Of course, having sports at all — after everything shut down last March — is something we can all be thankful for. But I cannot help but wonder what kind of homecoming the Flyers would have gotten prior to this game, after their heroic performance in the bubble against a bevy of teams that were true challenges for a young and unproven club. The atmosphere before puck drop was tempered and felt like practice. For anyone who has been to a Flyers game, the anticipation leading up to a Lauren Hart anthem is pretty special, as are the "oohs" and "ahhs" for every shot on goal and save.