NHL will bring back old school hockey this season, can Flyers survive it? 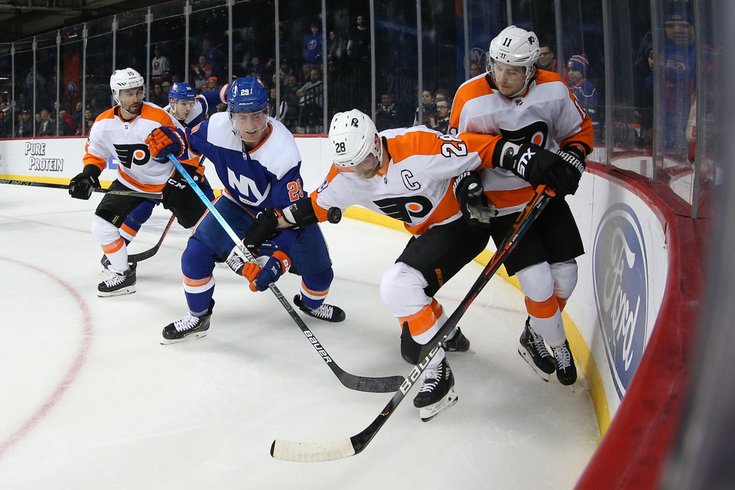 The parking lot outside of the Wells Fargo Center may be barren, with the COVID-19 protocols still in place this coming Flyers’ season. However, there may be a transformation taking place inside each time the Flyers touch the ice.

They could be skating into a time capsule.

With the condensed 56-game NHL schedule, and great familiarity the Flyers will have with their East Division opponents, playing each one of them eight times, emotions are certain to stir.

The result could be a yank back in time to the intense play of the 1990s — sans the glowing puck, oversized goalie pads and “the trap.” The festering bad blood that’s sure to build could produce a hybrid of today’s fast game with the old-school North American high-contact, tight-checking brand of hockey from three decades ago.

If it does revert to that style, do the Flyers have the physical makeup to survive it?

“Flyers’ coach Alain Vigneault has always been able to get his teams, not necessarily an individual, but his teams to another level,” Olczyk said. “He did that (last year). I wouldn’t say AV is necessarily a four-line coach, but he understands that it will be even more important (this season).

“The Flyers have done a good job with their depth, especially up front. They’re hard to play against and they need some young guys to continue to take that next step.”

There will be a mental and physical demand on the players, squeezing a season into January through to May. The Flyers will play back-to-back eight times this season. The only break they will get comes in February, when they have no back-to-back games.

“The idea that you’re playing more nights with less breaks, and the physical breakdown these players will take makes the depth of all of these teams super important,” Mleczko said. “You look at the rivalries, you look at the intensity of a shorter season, and there is an argument it’s more like a sprint than a marathon of a normal 82-game season.

“What Philly showed before the pause last year, they were a hard team to play against and they were physical. What impressed me the most about Philly, especially in February and March, and fast forward to August, was their ability to play any style.

“Whatever teams threw at them, they were able to adjust. Part of that is how they’re made up and it also has a lot to do with their grittiness, no pun intended towards their mascot. They have a chip on their shoulder and they’re proving people wrong. That Eastern Division is going to be really, really tough, but I think Philly is built for longevity this season.”

The NHL realigned its divisions this season to North, South, East and West. Each team will only play its division opponents eight times each. The Flyers will be in the East with the Boston Bruins, Buffalo Sabres, New Jersey Devils, New York Islanders, New York Rangers, Pittsburgh Penguins and Washington Capitals.

Just because the Flyers will be playing the Bruins, Penguins and Rangers eight times each, Boucher wanted to make sure he put the kibosh that these Flyers would be channeling the Broad Street Bullies.

“We will see what guys are made of when the temperature rises,” Boucher said. “I’m not talking about dropping the gloves, but competing, winning battles and having the inner push to realize these 56 games mean a lot more than an 82-game season.

“When I look at the Flyers’ lineup, they have a fourth line, and it may not be the biggest line, but they have some character there. Fans shouldn’t get the idea that this is all of a sudden going to revert back to the ’70s and teams dropping the gloves on a nightly basis. It’s going to be finding that inner compete.”

Vigneault may challenge Jake Voracek after a poor second-round playoff performance against the New York Islanders and Flyers’ captain Claude Giroux is always challenged by the demanding Philadelphia fanbase.

“It’s going to make for some good drama, but what we won’t see are gloves all over the ice,” Boucher said.

McGuire pointed out the Flyers do have a stabilizer—22-year-old goalie Carter Hart. In his first full NHL season, he went 24-13-3 overall with a .914 save percentage and 2.42 goals-against average and 1 shutout. In anchoring the Flyers’ first playoff series victory in eight years and reaching the NHL’s Eastern Conference second round, extending the Islanders to seven games, he was amazing an 9-5, with a .926 save percentage and a 2.23 goals-against postseason average.

“Hart takes a lot of pressure off of whether it’s Jake Voracek or Giroux, guys who aren’t getting any younger,” McGuire said. “That will be interesting to watch. You don’t see a lot of fighting stuff in the NHL anymore, those days are long gone. What you do see are a lot of grinders, character guys, guys who aren’t afraid to win races, or take hits to make plays, they’re important players.

“The Flyers have a lot of those guys.”

Olczyk does believe friction will be there, especially playing the same teams twice within 24 hours.

“The way the schedule is this will be very similar to baseball, where all you can do is shack up, go to the rink and go back to your hotel and that’s it,” Olczyk said. “Somebody puts one high and hard one around somebody’s chin, within reasons of good taste and within rules of the game, you have the opportunity to come right back in 24 hours or 48 hours and either settle the score or send a message.

“It is going to be intense — it really is. Looking at the teams in that Eastern Division, you can have a few points between first and fifth. The temperature is going to rise as we get further into the season.”