Flyers poised to take another step forward in 2021

Alain Vigneault is entering his second season. Carter Hart continues to improve. Philly has a balanced attack on offense and depth on defense. Is this their year? 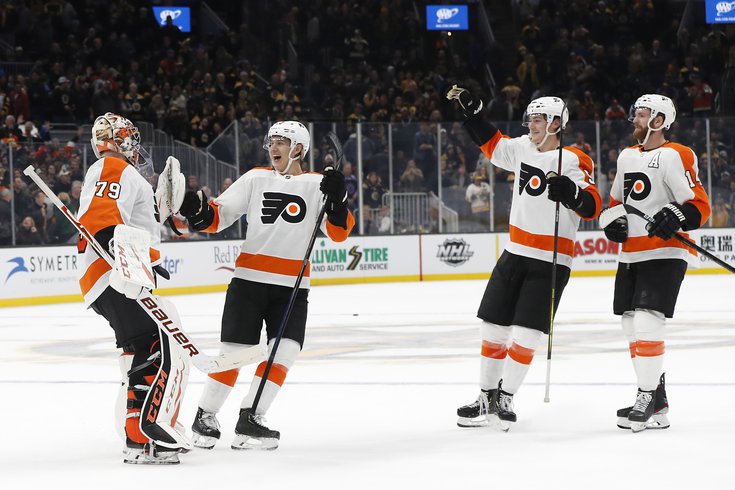 Philadelphia Flyers goaltender Carter Hart is congratulated by teammates after a win over the Bruins last season.

The Philadelphia Flyers will be a good team this season. That much is certain. Alain Vigneault is a very good coach. That much is also certain. Goaltender Carter Hart is a budding superstar. That much appears certain.

Where the Flyers could eventually land in this truncated 56-game, COVID-burdened season is anyone’s guess. It goes right up there with the question if anyone on the team can actually gain the crossover appeal of its popular mascot Gritty.

Winning might solve that. The Flyers are that close.

They enter the 2020-21 season on the brink of being elite. They won a playoff series for the first time in eight years in 2020, finishing the regular season 41-21-7, good enough for second in the Metropolitan Division, and earning the East's top seed inside the bubble before beating the Montreal Canadiens in the opening round of the Eastern Conference playoffs and ultimately losing in seven games to the surging New York Islanders in Round 2.

Is this a team can make a deep playoff run? The oddsmakers seem to think so, as TheLines.com currently gives Philly a +1800 chance at winning the Stanley Cup, the 6th best in hockey, and +650 odds of winning the Eastern Conference, third best.

The players also seem to think they have a good shot at contending again if they can avoid another slow start.

“I think first of all, we need to get off to a good start, especially with a shortened season,” said Flyers’ center Sean Couturier, the NHL’s Frank J. Selke Trophy winner, awarded to the league’s most skilled defensive forward. “I had gone through it the lockout year. We had a good team. We just got off to a poor start and just couldn’t make up ground in time to make the playoffs.

“I think it’s important to get off to a good start, get a good camp in and be ready for Game 1. Then go from there. Once you’re in the playoffs, anything can happen. That’s another part of our game where we’ll have to just take another step as the year goes on.”

A big void will be replacing defenseman Matt Niskanen, who retired in October, but signing Erik Gustafsson, an offensive defenseman, who could step up to pair with Ivan Provorov as the No. 1 defense combo, could assuage that loss.

The Flyers are hoping to get the 2018-19 version of Gustafsson, when he scored 17 goals and handed out 43 assists (60 points) with the Chicago Blackhawks. He’s a left-handed shot who will be asked to play on the right side, and in recent years has had an issue breaking the puck out of the defensive zone. It may explain why he had a combined minus-9 rating between Chicago and Calgary last season.

“Nisky is going to be missed for sure, with his play and especially his leadership and what he brought to the locker room,” he said. “Gustafsson, not knowing him much from him being out West, from seeing him the past week, the way he can move the puck and skate and be solid one-on-one, I think he’s going to be a great addition to our d-corps. He can have a great impact on our team.”

But there is one overriding factor the Flyers have to consider this season: Carter Hart.

Hart, who will turn 23 in August, quite literally could be the soul of the franchise — maybe even overshadowing the world-renowned Gritty in the near future.

“I like the Flyers’ goaltender, which I think is the most important thing, and I think Carter is going to continue to make great strides and he’s demonstrated that he can handle the pressures of playing in Philadelphia,” Flyers’ and NBC national NHL analyst Keith Jones said. “Carter does it with great poise, and it’s the No. 1 thing that I like about the Flyers.

“I wouldn’t call last year a success. I would call it a disappointment, because the players had higher aspirations. They’ll learn from it. Based on how well they were playing in the regular season, they had everything going for them when the COVID-19 shutdown came.

“They looked like a real dangerous team to me entering the playoffs. Then COVID hit and they were never were able to get back to that game again. Even though they got past Montreal and took the Islanders to seven games, they didn’t play as well as they had during the regular season. That’s why I say it was a disappointment.”

An interesting side note is how well Hart played at home, going 20-3-2 with a .943 save percentage, while he was 4-10-1 with a .857 save percentage on the road. That may have to do with growing pains, more than anything else. Hart is a creature of habit and routine, so being on the road was a new experience for him.

And technically, his playoff run did come in the NHL bubble in Toronto, Canada, posting that 9-5 record and 2.23 goals-against average — on the road.

The Flyers were seventh in the NHL in scoring, averaging 3.29 goals a game.

“The scoring is distributed throughout all of their forwards and the team has a defense that will be very involved offensively,” Jones said.

So, just how good could this team wind up being in Vigneault's second season at the helm?

“The Flyers could be an excellent team, and they are extremely well-coached and you can be sure that they’ll be well-conditioned,” Jones said. “They are a playoff team, and as we know in the NHL, if you’re a playoff team, you can win the Stanley Cup.

“I think the sky is the limit. They’re going to be a tough team to play against, but my one concern I would have is how tough physically they’re going to be, because when you’re playing division teams eight times in a season, there’s going to be a lot of bad blood. This is going to be 1990-type hockey. That’s where the Flyers will have to dig in deep in that regard.

“It’s going to be a real physical and mental battle, simply because they’re going to be facing the same opposition so frequently.”

Because of the COVID threat, the NHL realigned its divisions this season to North, South, East and West. Each team will only play its division opponents eight times each.

“That becomes sometimes a lot like playoff hockey,” Vigneault said. “You're going to be playing back-to-back against the same team, whether it's in your building or on the road. It's going to be a little bit different, but at the end of the day you're trying to win games so that you can get in the playoffs and have an opportunity to compete for the Stanley Cup.”

The season will extend from January, when the Flyers open by hosting the rival Penguins on Wednesday, Jan. 13, until May. The Flyers will play back-to-back eight times this season. The only break they will get comes in February, when they have no back-to-back games.

Otherwise, expect a grueling season — with a possible breakthrough outcome.

“I like a lot of things about the Flyers, and what I really like about this team is that the Philadelphia Flyers had not developed a goalie since Ron Hextall and they have one now in Carter Hart,” said NHL expert Gord Stellick, who hosts the NHL’s “Morning Skate” on SiriusXM Satellite Radio’s NHL Network. “They picked up Kevin Hayes last year and I like how they put everything together up front. They’ve developed some depth on defense and I like the identity that they’ve built with Giroux.

“I remember when [Flyers’ general manager] Chuck Fletcher went there to Philly and the big story was Gritty. All of a sudden, a lot of things started coming together beginning with the goalie. I see the Flyers finishing second in the division, behind Washington. But I see the Flyers in the final four, with Tampa Bay in the Eastern Conference.

“Maybe the Flyers are the one team to do what St. Louis did a few years ago and go on a serious run. Who knows? Maybe Philadelphia is it.”

We'll find out starting on Wednesday.