Gritty gets green light to attend Flyers games in 2021

'Without me, where is the joy?' mascot asked NHL commissioner 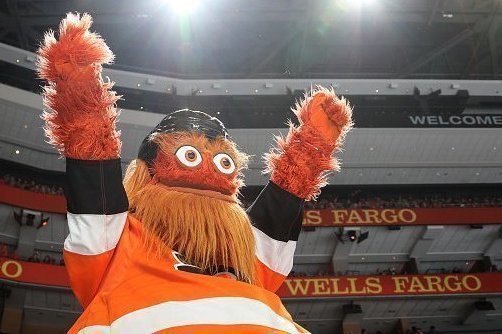 Philadelphia Flyers mascot Gritty has not attended a game at the Wells Fargo Center since early march, when last season was suspended due to the coronavirus pandemic. With the 2021 season around the corner, Gritty wants to know whether he'll be invited back.

UPDATE (12/23/20): Philadelphia Flyers mascot Gritty confirmed Wednesday that he will, in fact, be an "essential" member of the Flyers organization and can attend games next season at the Wells Fargo Center.

The Philadelphia Flyers are scheduled to return to the ice in January for a shortened, unconventional NHL season comprised of 56 games, all of which will be played against seven realigned divisional opponents.

Last season, the Flyers' late-season push made them a top-seeded playoff darling, but they eventually ran out of steam against the New York Islanders.

Once again, COVID-19 will keep fans out of the Wells Fargo Center to start the upcoming season. Does that mean Gritty, the team's biggest fan, will be barred from entry, too?

Not on his watch, apparently.

Gritty tweeted his concern on Monday that NHL Commissioner Gary Bettman did not indicate whether mascots will be permitted to attend games in 2021. They were not allowed after the season was suspended in March and then resumed in a bubble.

So many of you have claimed through the years “Gritty, I would take a bullet for you.” I would never ask that of you. Instead, my request is simple (and much less life threatening)
A thread:

"Hockey is back! I couldn’t help but notice that Gary left mascots out of his big announcement yesterday," Gritty wrote on Twitter. "@NHL you kept me out of the playoff bubble last season but I DEMAND admission to Flyers games this season. Hockey needs me, I need hockey, the world needs Gritty."

To raise the stakes, Gritty launched a change.org petition to get clarity on this question, writing in part:

It is with this public display of desperation that I hope to reach Gar and come to a unified decision regarding my attendance at Flyers games this season.

Without me, where is the joy? Where is the artistry? Where is the downright tomfoolery that delicately balances with the on-ice battles and displays of athletic prowess? One cannot simply exist without the other.

I promised the world at the brink of quarantine that I would be the orange light of hope and those plans haven’t changed. As a mascot, I have a duty, a responsibility, and I simply ask that you open your hearts to grant me permission to do what I love for the sport you all love. Let's get weird.

Gritty has kept himself plenty busy in the absence of hockey games. He made an appearance with a bunch of puppies at the Wells Fargo Center, went to outer space, inspired a female Grittney in England, delivered meals at a hospital, paraded through Delco, did an impression of Joe Exotic, and bounced ping pong balls off pots into a cup, among other things.

He's done the best he can to pick up the pieces of a disrupted life, but he naturally needs some direction on what 2021 will look like for him.

More than 10,600 people had signed Gritty's petition by Tuesday afternoon, with a goal of 15,000. Your support may help get his message to the powers that be.

So this is what YOU are going to do for ME. It’s time to put your e-signature where your mouth is. https://t.co/OMy2aI7FLc